Private equity (PE) dealmaking was overshadowed by angel and venture capital funding that buoyed aggregate private investments in the country to a record high this year. While e-commerce and internet as a business at large continued to drive top PE deals, renewable energy came across as another key theme, as per VCCEdge, the data research platform of VCCircle.

Here are the top PE deals of the year:

The biggest PE activity this year involved a buyout that was essentially not an investment in India but an overseas asset sale by an Indian firm. Centerbridge Partners acquired German wind turbine manufacturer Senvion from Suzlon Energy. Although Senvion also has a presence in India and has been making small turbines in the country for the past three years, bulk of its business is overseas. For Suzlon, the deal marked a large asset sale to shrink its debt pile up.

Flipkart made it to the top charts for the second year running as it scooped $700 million in its seventh round of funding since 2012 amidst cutthroat competition with Amazon and Snapdeal. Existing investors Tiger Global and Steadview Capital led this round with participation from others. The firm, which put the Indian startup ecosystem on a global map, has raised $3.1 billion till date and the latest round of funding valued it at $15.2 billion. 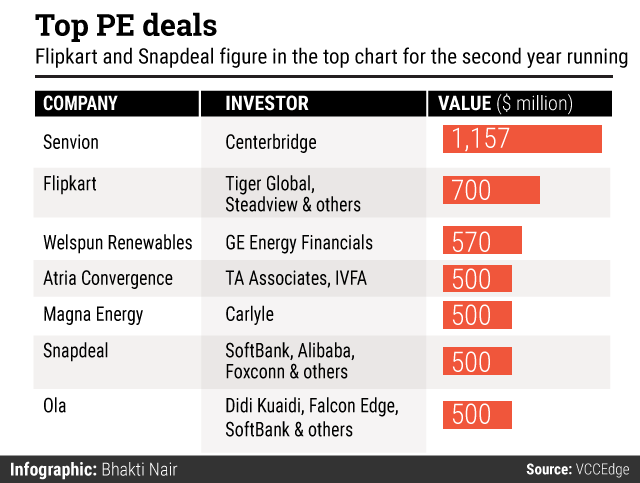 This was not a conventional PE deal and even had shades of a strategic investment given GE's presence and interest in the renewable energy sector. In this deal, GE Energy Financial Services invested $570 million in Welspun Renewables Energy, the solar and wind energy development arm of Welspun Group, through a mix of debt and equity.

Carlyle returned with its biggest India-related deal since it pumped in $650 million in HDFC eight years ago. Carlyle International Energy Partners committed $500 million in India-focused oil and gas producer Magna Energy, a UK-based firm set up by former Cairn executives. The funding will help Magna Energy to develop oil and gas projects across the Indian subcontinent, with an aim to become a full-cycle oil and gas company through acquisitions and securing new hydrocarbon licences.

TA Associates and India Value Fund Advisors (IVFA) committed $500 million in broadband service provider Atria Convergence Technologies. While TA Associates came as a new investor, IVFA rolled over its existing investment in the company into a new fund, which means all the money didn’t go into the firm.

Online marketplace Snapdeal was not far behind arch rival Flipkart in scooping up fresh cash from existing investor SoftBank besides Foxconn, Alibaba, Temasek and others. While one of its early strategic investors, eBay, sold part of its stake, Snapdeal got fresh resources to fight it out with rivals Flipkart and Amazon. This deal also marked a strong bet by Chinese internet and technology firms in India. Indeed, for Alibaba this meant betting on two horses in the e-commerce segment having already backed mobile-wallet-cum-online-marketplace Paytm early this year.

Cabs aggregator Ola held the distinction of raising the most money by a single firm this year across sectors, aggregating to around $900 million in two rounds. This was partly to do with the bigger $500 million round it raised in the second half with a bunch of new investors including China's Didi Kuaidi. It provided a strong financial muscle for the company to battle it out with Uber, having already got a headstart in the cab hailing business in India. With TaxiForSure under its wings, Ola is way ahead of its rivals including legacy local player Meru.