Microsoft Win8 Tablet is not a game changer
Advertisement

Microsoft Win8 Tablet is not a game changer

While there is an appropriately high interest in the Win8 Tablet announcement from Microsoft today, there is no way it is going to be a game changer. Simply because it was never intended to be.

Game changers meet newly emerging, unmet needs, in new ways. People are usually happy enough, until they see the new product/solution and realize "hey, this helps me do something I couldn't do before" or "this helps me solve my problem a lot better." Game changers aren't a simple improvement, they allow customers to do something radically different. And although at first they may well appear to not work too well, or appear too expensive, they meet needs so uniquely, and better, that they cause people to change their behavior.

Motorola invented the smart phone. But Motorola thought it was too expensive to be a cell phone, and not powerful enough to be a PC. Believing it didn't fit existing markets well, Motorola shelved the product.

Apple realized people wanted to be mobile. Cell phones did talk and text OK - and RIM had pretty good email. But it was limited use. Laptops had great use, but were too big, heavy and cumbersome to be really mobile. So Apple figured out how to add apps to the phone, and use cloud services support, in order to make the smart phone fill some pretty useful needs - like navigation, being a flashlight, picking up tweets - and a few hundred thousand other things - like doctors checking x-rays or MRI results. Not as good as a PC, and somewhat on the expensive side for the device and the AT&T connection, but a whole lot more convenient. And that was a game changer.

From the beginning, Windows 8 has been - by design - intended to defend and extend the Windows product line. Rather than designed to resolve unmet needs, or do things nobody else could do, or dramatically improve productivity over all other possible solutions, Windows 8 was designed to simply extend Windows so (hopefully) people would not shift to the game changer technology offered by Apple and later Google.

The problem with trying to extend old products into new markets is it rarely works. Take for example Windows 7. It was designed to replace Windows Vista, which was quite unpopular as an upgrade from Windows XP. By most accounts, Windows 7 is a lot better. But, it didn't offer users anything that that made them excited to buy Windows 7. It didn't solve any unmet needs, or offer any radically better solutions. It was just Windows better and faster (some just said "fixed.")

Nothing wrong with that, except Windows 7 did not address the most critical issue in the personal technology marketplace. Windows 7 did not stop the transition from using PCs to using mobile devices. As a result, while sales of app-enabled smartphones and tablets exploded, sales of PCs stalled: 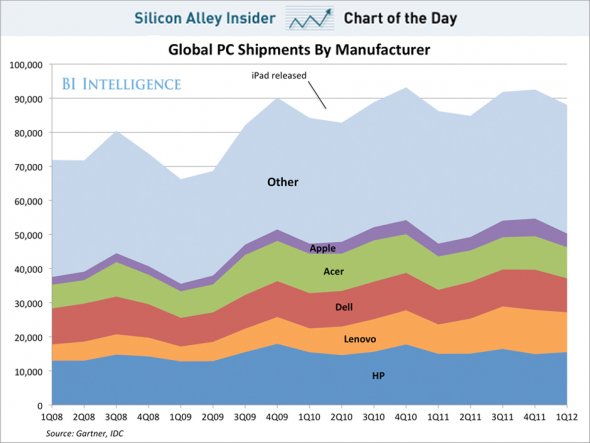 People are moving to the mobility provided by apps, cloud services and the really easy to use interface on modern mobile devices. Market leading cell phone maker, Nokia, decided it needed to enter smartphones, and did so by wholesale committing to Windows7. But now the CEO, Mr. Elop (formerly a Microsoft executive,) is admitting Windows phones simply don't sell well. Nobody cares about Microsoft, or Windows, now that the game has changed to mobility - and Windows 7 simply doesn't offer the solutions that Apple and Android does. Not even Nokia's massive brand image, distribution or ad spending can help when a product is late, and doesn't greatly exceed the market leader's performance. Just last week Nokia announced it was laying off another 10,000 employees.

Reviews of Win8 have been mixed. And that should not be surprising. Microsoft has made the mistake of trying to make Win8 something nobody really wants. On the one hand it has a new interface called Metro that is supposed to be more iOS/Android "like" by using tiles, touch screen, etc. But it's not a breakthrough, just an effort to be like the existing competition. Maybe a little better, but everyone believes the leaders will be better still with new updates soon. By definition, that is not game changing.

Simultaneously, with Win8 users can find their way into a more historical Windows inteface. But this is not obvious, or intuitive. And it has some pretty "clunky" features for those who like Windows. So it's not a "great" Windows solution that would attract developers today focused on other platforms.

Win8 tries to be the old, and the new, without being great at either, and without offering anything that solves new problems, or creates breakthroughs in simplicity or performance.

Do you know the story about the Ford Edsel?

By focusing on playing catch up, and trying to defend & extend the Windows history, Microsoft missed what was most important about mobility - and that is the thousands of apps. The product line is years late to market, short on apps, short on app developers and short on giving anyone a reason to really create apps for Win8.

Some think it is good if Microsoft makes its own tablet - like it has done with xBox. But that really doesn't matter. What matters is whether Microsoft gives users and developers something that causes them to really, really want a new platform that is late and doesn't have the app base, or the app store, or the interfaces to social media or all the other great thinks they already have come to expect and like about their tablet (or smartphone.)

Google soon joined the competition, built a very large, respectable following by chasing Apple and offering manufacturers an option for competing with Apple.

But Microsoft's new entry gives nobody a reason to develop for, or buy, a Win8 tablet - regardless of who manufactures it. Microsoft does not deliver a huge, untapped market. Microsoft doesn't solve some large, unmet need. Microsoft doesn't promise to change the game to some new, major trend that would drive early adopters to change platforms and bring along the rest of the market.

And making a deal so a dying company, on the edge of bankruptcy - Barnes & Noble - uses your technology is not a "big win." Amazon is killing Barnes & Noble, and Microsoft Windows 8 won't change that. No more than the Nook is going to take out Kindle, Kindle Fire, Galaxy Tab or the iPad. Microsoft can throw away $300million trying to convince people Win8 has value, but spending investor money on a dying businesses as a PR ploy is just stupid.

Microsoft's problem is that it did not accept the PC market was going to stall back in 2008 or 2009. When it should have seen that mobility was a game changing trend, and required retooling the Microsoft solution suite. Microsoft dabbled with music mobility with Zune, but quickly dropped the effort as it refocused on its "core" Windows. Microsoft dabbled with mobile phones across different solutions including Kin - which it dropped along with Microsoft Mobility. Back again to focusing on operating systems. By maintaining its focus on Windows Microsoft hoped it could stop the trend, and refused to accept the market shift that was destined to stall its sales.

Microsoft stock has been flat for a decade. It's recent value improvement as Win8 approaches launch indicates that hope beats eternally in some investors' breasts for a return of Microsoft software dominance. But those days are long past. PC sales have stalled, and Windows is a product headed toward obsolescence as competitors make ever better, more powerful mobile platforms and ecosystems. If you haven't sold Microsoft yet, this may well be your last chance above $30. Ever.