The Golden rule? Thoughts on gold as an investment

Paraphrasing Winston Churchill, gold is a "riddle, wrapped up in a mystery inside an enigma", at least as far as I am concerned. I don't understand what moves the gold price and I have never held gold in my portfolio. That does not mean, however, that I am not fascinated by the price of gold and immune from its movements. That was brought home last week, when the price of gold dropped by 9% on April 15, 2013, the biggest one day drop in thirty years. Not only did the prices of other precious metals (silver dropped 12%) and industrial metals drop, but stock prices took a tumble as well. While the attention has focused on the price drop in recent days, gold has had a good run over the last decade. 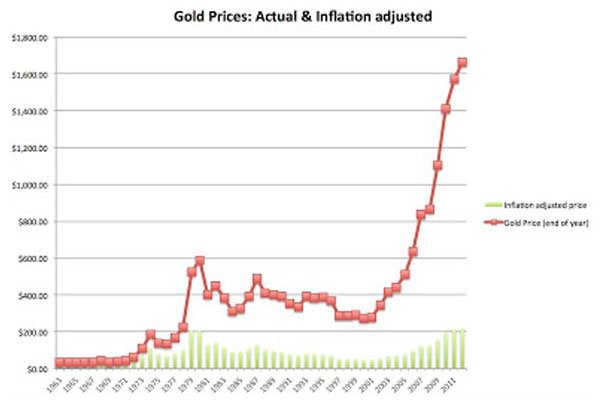 The nominal and inflation-adjusted prices of gold have soared in the last decade, and at the end of 2012, the nominal price was at an all time high of 1664 and the inflation-adjusted price was close to its previous high set at the end of the 1970s. The big question that has been debated in recent days is whether gold will continue to drop in the coming days. More generally, is gold is under or over priced? With my limited understanding of gold, I decided to give it a shot.

Does gold have an intrinsic or fundamental value?

The intrinsic value of an asset is a function of its expected cash flows, growth and risk. Since gold is a non cash-flow generating asset, I argued in this earlier blog post that you cannot estimate an intrinsic value for gold. It is the same argument I would make about all collectibles: Picassos, baseball cards or Tiffany lamps included. If one of the central tenets of value investing is that you should never invest in an asset without estimating its value, that would seem to rule out gold as an investment for a classic value investor. In fact, Warren Buffett has repeatedly argued against investing in gold because it's value cannot be estimated.

There is an alternate route that can be used to estimate the "fundamental" value of a commodity by gauging the demand for the commodity (based on its uses) and the supply. While that may work, at least in principle, for industrial commodities, it is tough to put into practice with precious metals in general, and gold, in particular, because the demand is not driven primarily by practical uses.

If gold does not have an intrinsic value, what is it that drives its value? There are at least three factors historically that have influenced the price of gold.

1. Inflation: If as is commonly argued, gold is an alternative to paper currency, you can argue that the price of gold will be determined by how much trust individuals have in paper currency. Thus, it is widely believed that if the value of paper currency is debased by inflation, gold will gain in value. To see if the widely held view of gold as a hedge against inflation has a basis, I looked at changes in gold prices and the inflation rate each year from 1963-2012. 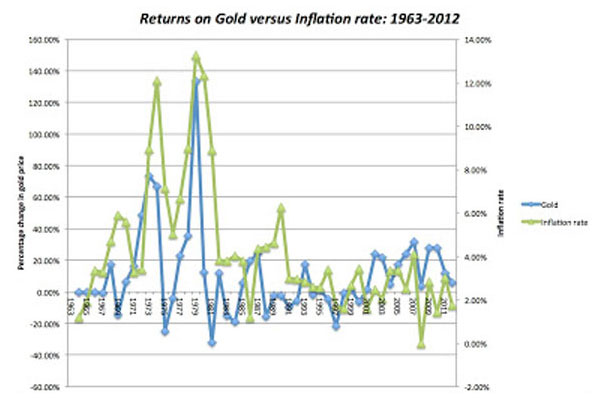 The co-movement of gold and inflation is particularly strong in the 1970s, a decade where the US economy was plagued by high inflation and the correlation between gold prices and the inflation rate is brought home, when you regress returns on gold against the inflation rate for the entire period:

While this regression does back the conventional view of gold as an inflation hedge, there are two potential weak spots. The first is that the R-squared is only 20%, suggesting that factors other than inflation have a significant effect on gold prices. The second is that removing the 1970s essentially removes much of the significance from this regression. In fact, while the large move in gold prices in the 1970s can be explained by unexpectedly high inflation during the decade, the rise of oil prices between 2001 and 2012 cannot be attributed to inflation. In fact, taking a closer look at the data, it is clear that gold is more a hedge against extreme (and unexpected) movements in inflation and does not really provide much protection against smaller inflation changes.

2. Fear of crisis: Through the centuries, gold has been the “asset” of last resort for investors fleeing a crisis. Thus, as investor fears ebb and flow, gold prices should go up and down. To test this effect, we used two forward-looking measures of investor fears – the default spread on a Baa rated bond and the implied equity risk premium (which is a forward looking premium, computed based upon stock prices and expected cash flows). As investor fears increase, you should expect to see these premiums in both the equity and the bond market increase. 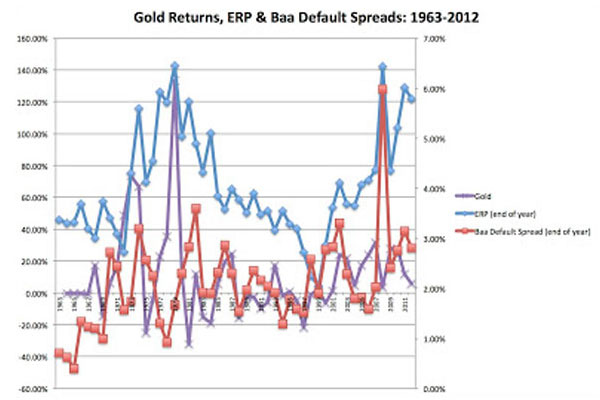 While the relationship is harder to decipher than the one with inflation, higher equity risk premiums correlate with higher gold prices. Again, regressing annual returns on gold against these two measures separately, we get: 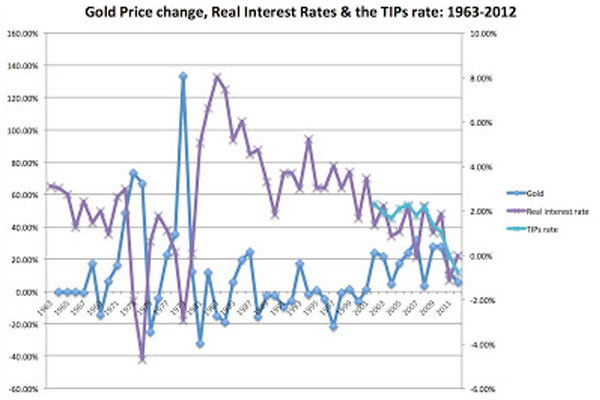 A Relative Valuation of Gold

Knowing that gold prices move with inflation, equity risk premiums and real interest rates is useful but it still does not help us answer the fundamental question of whether gold prices today are too high or low. Can you do a relative valuation of gold? I don’t know but I am going to try.

A. Against the inflation index

The most comprehensive paper that I have seen on the relationship between gold prices and inflation is available here, with a follow up here. In these papers, the price of gold is related to the CPI index and a ratio of gold prices to the CPI index is computed. I try to replicate their findings and I use the US Department of Labor CPI index for all items (and all urban consumers) set to a base of 100 in 1982-84, but with data going back to 1947. The level of the index at the end of 2012 was 231.137. Dividing the gold price of $1664/oz on December 31, 2012, by the CPI index level yields a value of 7.20. To get a measure of whether that number is high or low, we computed it every year going back to 1963: 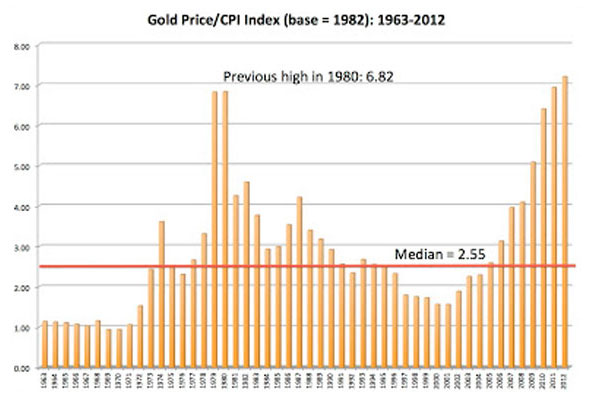 The median value is 2.55 for the 1963-2012 time period and 2.91 for the 1971-2012 period. Thus, based purely on the comparison of the current measure of the Gold/CPI ratio to the historical medians does miss the fact that equity risk premiums are high and real interest rate are negative today, both of which should make gold more attractive as an investment. Consequently, I regressed the Gold/CPI index against equity risk premiums and real interest rates and while real interest rates seem to have little effect on the Gold/CPI ratio, there is strong evidence that it moves with the ERP, increasing (decreasing) as the ERP increases (decreases):

The implied equity risk premium for the S&P 500 at the start of April 2013 was 5.79%, and plugging that value into the gold/CPI regression yields the following:

While gold remains over priced, relative to historic norms, it looks far less over priced once we account for today's risk premiums.

B. Against other precious metals

There is another way that you can frame the relative value of gold and that is against other precious metals. For instance, you can price gold, relative to silver, and make a judgment on whether it is cheap or expensive (on a relative basis). At the end of December 2012, the gold price was $1664/oz and the silver price was $30.35/oz,, yielding a ratio of 54.84 for gold to silver prices (1664/30.35). To get a measure of where this number stands in a historical context, we looked at the ratio of gold prices to silver prices from 1963 to 2012: 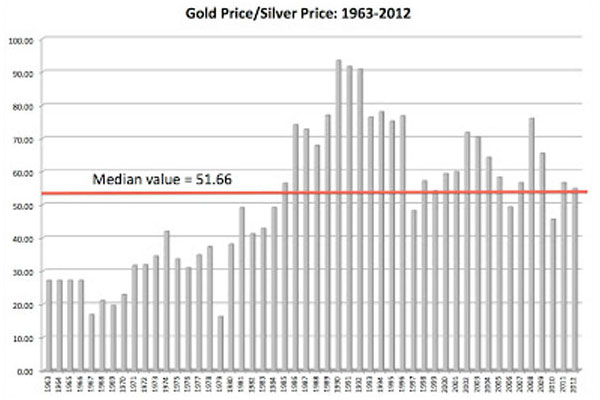 The median value of 51.22 over the 1963-2012 period would suggest that gold is not over priced, relative to silver. In fact, silver has dropped in price more than gold has this year and using the April 17, 2012 prices for gold (1382.2) and silver (23.31), we get a ratio of 59.30. Given that gold and silver move together more often than they move in opposite directions, I am not sure that this relationship can be mined to address the question of whether gold is fairly priced today, but it can still be the basis for trading across precious metals.

It can be argued that pricing gold relative to silver or against the inflation index misses the primary rationale for investors holding gold, i.e., as insurance against uncommon but potentially catastrophic risks to their assets, from hyper inflation to war and terrorism. Viewed from that perspective, gold operates as insurance for an investor whose assets are primarily financial and thus exposed to these catastrophic risks. Put in less abstract terms, if you add gold to your portfolio, it is not to make money, per se, but to buy protection against “black swan” events that could swamp your other investments. If you view gold as a hedge/insurance against event risk, there are two implications:

2) It also follows that the price of gold should reflect the cost of buying the insurance, which in turn will be driven by the uncertainty you feel about the future and the likelihood of catastrophic events. Thus, the multiple crises over the last decade (banking, war, terrorism) explain both the surge in gold prices over the last decade and the correlation with equity risk premiums.

It is worth noting that gold is not the only insurance against black swan events. There eare other ways, using other real assets (collectibles, real estate, other commodities) or financial derivatives (including puts on indices) that can deliver the same hedging results, perhaps at a lower cost.

I have always been uncomfortable talking about the value of gold as an asset and its place in my portfolio. Writing this post has been cathartic, since it has allowed me to recognize the two sources of my discomfort. First, I am most comfortable with cash flow generating investments, where I can estimate an intrinsic value, and my valuation tool kit is limited when it comes to valuing gold. Second, I don't share the fervor that some investors have for gold, who seem to view it as much in emotional terms as in financial ones.

As a complete novice in assessing the value of gold, here is how I see its value. As a stand-alone investment, I would not buy gold, given its history (of delivering low returns in the long term) and given how it is priced today. As insurance, though, I think it makes sense to add to your portfolio, even at today's prices. You don't have to be a conspiracy theorist or paranoid about central banks to have legitimate fears that prices in financial markets, built upon uncommonly low interest rates, may collapse. I know that the price of gold as insurance is higher than it has been in the past, but the risks that you are insuring against are also much higher than they have been historically.

Update: If you are interested in exploring the data on your own, you can download the raw data on gold prices, silver prices, CPI, interest rates, ERP and other variables.