Demonetisation: Can bitcoins ever become the currency of choice in a cashless India?

It has been exactly a month since Prime Minister Narendra Modi announced his government’s decision to demonetise Rs 500 and Rs 1,000 currency notes, which made up for 86% of the total value of the currency in circulation.

As VCCircle noted last week, the fact that more cash than anticipated has re-entered the banking system shows that the government’s estimates of the total black money in circulation in the form of cash may have gone completely awry. Either that, or Indians have simply managed to launder most of their money.

Either way, the government’s accent seems to have shifted away from curbing black money to making India a cashless economy. Not only is the government vigorously pushing the idea of a cashless India via advertising campaigns, it has also roped in six chief ministers as part of a panel headed by Andhra Pradesh’s N. Chandrababu Naidu to suggest ways of going cashless.

Some news reports say that the adoption of bitcoin, a virtual cryptocurrency, has seen a surge in India following demonetisation. What really is bitcoin? And can it really become a viable alternative in a country that carries out anywhere between 95% and 98% of its transactions in cash? Here’s all you wanted to know. 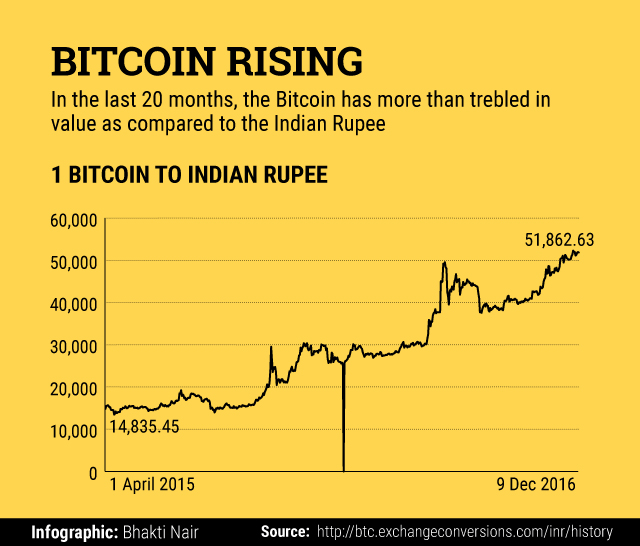 What is bitcoin? Is it even a real currency?

It is essentially a digital virtual ‘cryptocurrency’ (a digital medium of exchange) invented by ‘Satoshi Nakamoto’, an unidentified computer wizard or a group of programmers. Introduced on 31 October 2008, bitcoin was released as open source software in 2009. Bitcoin is effectively an open, yet secure digital medium of exchange, which is not backed by a central bank like the Reserve Bank of India (RBI) or the US Federal Reserve.

How is bitcoin different from paper money?

Unlike paper money, which is virtually willed into existence by central banks, bitcoins are ‘mined’ by computers owned by individuals or companies. Also, there will never be an unlimited number of bitcoins. By 2140, 21 million bitcoins will have been mined, after which the process will automatically stop. The currency will, therefore, be a bit like gold, which, unlike paper money, has intrinsic value on account of its limited supply.

How are bitcoin transactions recorded?

Bitcoin transactions are recorded using blockchain, a public ledger that is open to everyone to see. As VCCircle noted in an earlier article, blockchain is basically a technology that, by using math and cryptographic tools, helps create an open and decentralised database of transactions, monetary or otherwise. This creates a record whose authenticity can be verified by everyone involved in the transaction, effectively allowing institutions like banks to significantly cut transaction cost and time, by executing near real-time transfers of invoices as well as purchase orders. The ‘blockchain’ technology also allows all concerned trading parties to track information via a secure network, without the requirement for any third party verification.

Has any country ever seen the mass adoption of bitcoin as a medium of exchange?

Although bitcoin has not replaced any national currency as the principal medium of exchange yet (and is unlikely to, anytime soon), its use has gained traction in several developed countries, especially the ones that are fast doing away with cash. Estonia, Denmark, Sweden, Finland, South Korea, the US, Canada, the UK and Australia have seen bitcoin being increasingly adopted for use digitally.

At least one country—Cyprus—saw the new technology being adopted in a time of economic adversity. The Cypriot banking crisis of 2013 saw bitcoin emerge as a preferred option, with the country even becoming home to the world’s first bitcoin ATM.

What does the RBI have to say about bitcoins?

In December 2013, the RBI said that it has no plans to regulate bitcoins. “Regulation comes only when people are doing certain business and we come to understand that something wrong is happening,” a report in The Times of India cited the then RBI deputy governor KC Chakrabarty as saying. “First of all, we don't understand this subject. But at present what we are saying is neither we regulate them nor we support them,” he said. Chakrabarty’s comments came following an RBI advisory that cautioned people against using such virtual currencies.

Speaking about bitcoin, former RBI governor Raghuram Rajan said in May this year that the central bank was “watching the evolution” of such currencies. “One of the problems that we envisage with bitcoin… one, of course, was the security issue. You have seen that they are not as secure as people thought they were. But the second issue was the fluctuation in value. For money, you require something that is a stable store of value, and for something that fluctuates so much, is less effective in use as money,” Rajan said. “But I think that these virtual currencies will certainly get much better, much safer and over time, will be the form of transaction,” he said.