Zomato IPO: How the numbers stack up in a 13-year journey
Advertisement

Zomato IPO: How the numbers stack up in a 13-year journey

Zomato has filed its draft red herring prospectus (DRHP) for an initial public offering (IPO) of up to Rs 8,250 crore, which will mark the first public market outing for an Indian foodtech firm and the first-ever for a unicorn from the country.

According to the DRHP filed with the Securities and Exchange Board of India (SEBI), the IPO will constitute a fresh issue of equity shares worth Rs 7,500 crore and an offer for sale of Rs 750 crore by its largest stakeholder Info Edge. The company also said it might consider a private placement of equity shares aggregating up to Rs 1,500 crore prior to filing of the prospectus with the RoC. The minimum size of the pre-IPO placement will have to constitute at least 10% of the post-offer paid-up equity share capital.

Several factors are in favour of Zomato’s float and its timing.

First, the numbers. The Gurugram-based company is growing quickly even as it pares cash burn. Operating revenues have nearly doubled to Rs 2604.7 crore for the financial year 2019-2020 (FY20) from Rs 1312.5crore in the previous fiscal. Of that, 90% was derived from its primary revenue sources including advertisements, commission, and subscription offering Zomato Gold (now Zomato Pro).

In fact, in the third quarter of FY21, it recorded the highest ever quarterly gross order value (GOV) to date at Rs ₹2981 crore, chiefly on the back of the massive digital shift following the Covid-19 outbreak.

Its losses widened over 2.5 times to Rs 2385.6 crore during the year from 1010.2 crore in FY19. In July last year, Zomato said it expected its monthly burn rate to be less than $1 million, which marks a significant decrease from an estimated $50 million monthly burn in early 2019.

In what could be a sign of its sharply narrowing losses, the company has reduced its burn rate to Rs 682 crore in the nine-month period ended December 31, 2020. The company recorded Rs 1301.3 crore in revenues from operations during this period.

Average monthly transacting users, or customer who have placed at least one order on the platform, stood at 5.8 million in the nine-month period of this fiscal. In FY20, it nearly doubled to 10.7 million from 5.6 million the year before.

The company has also improved its unit economics and contribution margin. While discounts have decreased 66% per order during the first nine months of FY21, commission rates have gone up by 44% and it earns 75% more on each order in the form of delivery charges. Delivery costs have come down by 15%.

It recorded a positive contribution margin of Rs 22.9 per order during the nine-month period of this fiscal year, from a negative Rs 30.5 per order in FY20.

Zomato has raised a total Rs 12666.8 crore over the course of its 13-year existence. Since September last year when its CEO Deepinder Goyal made an internal announcement to his employees about the IPO plans, the company has raised over $1 billion from a consortium of global marquee investors.

Zomato was valued at $5.4 billion in its last financing round. 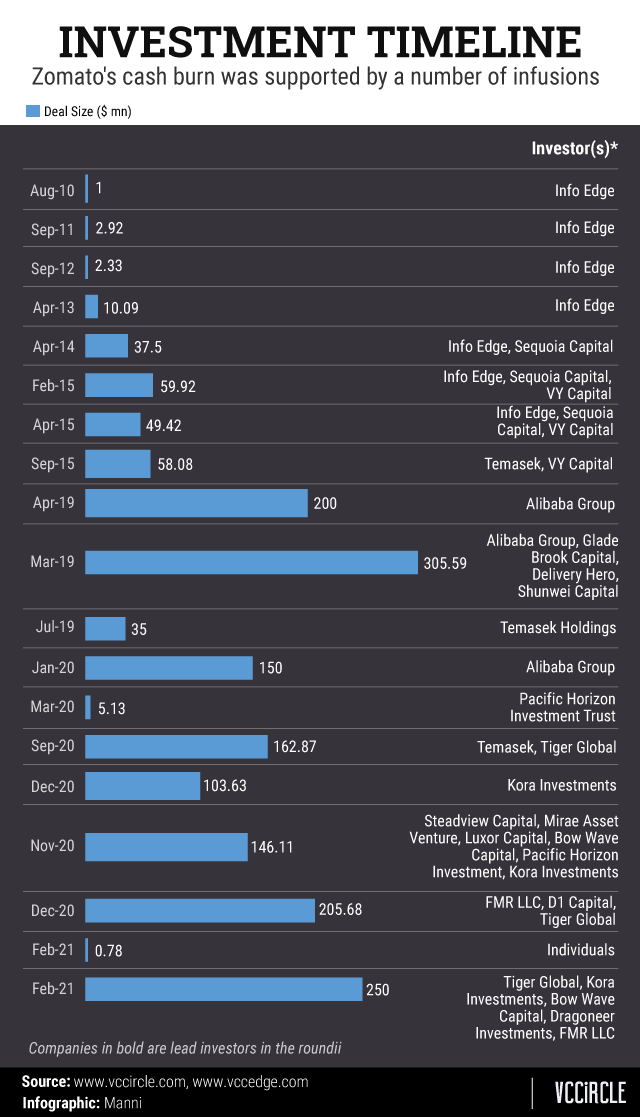 Info Edge, with 18.55% ownership, is the largest stakeholder in the company followed by China’s Alibaba Group at 16.53%. It also counts several marque investors such as Sequoia Capital, Temasek Holdings, Tiger Global Management, Kora Investment, and VY Capital on its cap table.

Sanjeev Bikhchandani-founded Info Edge, which first invested about Rs 5 crore in the company in August 2010, will sell shares worth Rs 750 crore in the upcoming IPO. 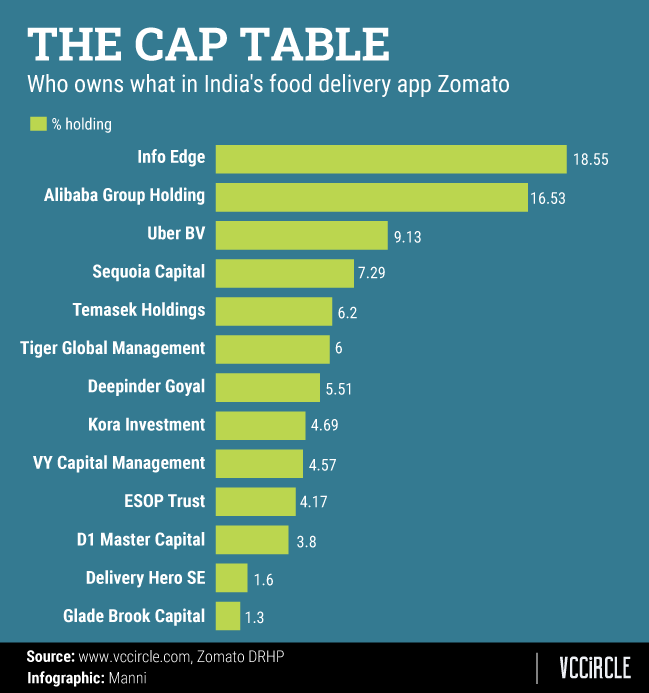 Info Edge brings some of the largest global and Indian private equity funds to the game including Schroders, Matthews, Amansa, Ward Ferry, Vanguard and Nalanda, who along with other institutional investors, are expected to fuel initial success for the IPO. Listed on BSE in 2006, Info Edge’s stock has grown about 16 times in the last 10 years. The company is today valued at about Rs 61,000 crore market cap.

Acquisitions have been a primary growth vehicle for the company. From 2014, the company has made 20 acquisitions across eight countries.

Its biggest bets across geographies have been the acquisition of ride hailing app Uber’s food delivery business in India, Uber Eats. The restaurant aggregator paid $35 million in cash as part of the transaction. The remainder was paid out in the form of preference shares which converted into a 9.13% stake for Uber in Zomato. The estimated fair value of the transaction was at $206 million. 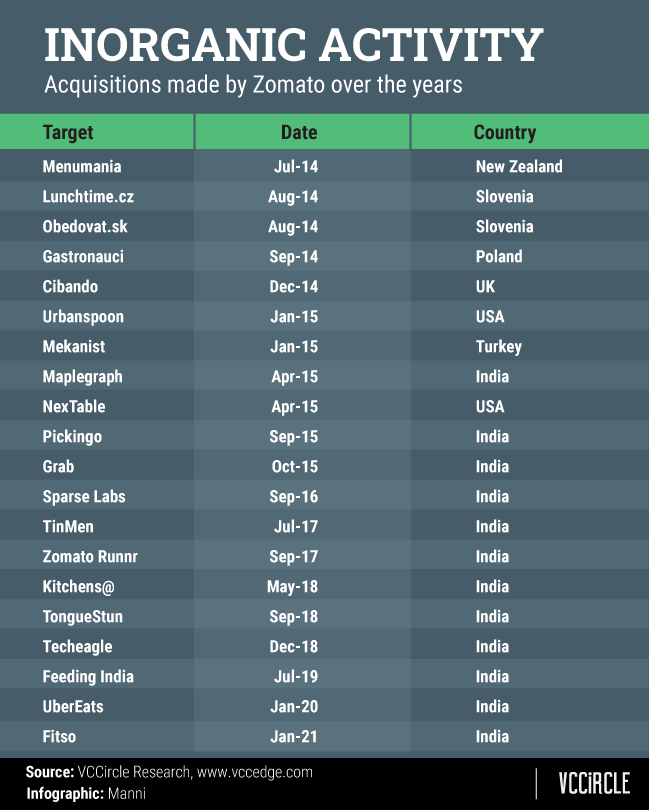 Zomato had a footprint across 23 countries outside India as of December 31, 2020, but it announced in the DRHP document that the company has taken a “conscious strategic call” to focus only on the Indian market going forward.