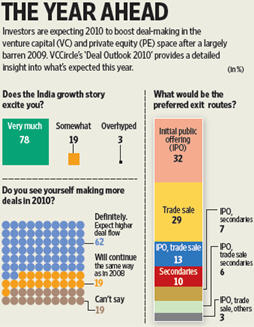 Bruised, battered and battle-weary, Indian dealmakers have scraped through the economic event that was 2009 and, it has been nothing short of “survival of the fittest”, a term made famous by evolutionary biologist Charles Darwin, for many. After a long winter, that engulfed most part of the year, deal-makers are now ready to pull out their pinstripes from the closet and fill up their dry deal-signing pen as they await a long and fertile spring-summer spell.

VCCircle, an online knowledge powerhouse chronicling the deal space, set out to take a pulse reading of the alternative asset industry (private equity and venture capital) which has spent most part of 2009 battling the ‘S’ (slowdown) flu. The good news is that an overwhelming majority of the 32 deal-makers—that took part in VCCircle’s Deal Outlook 2010 survey—feel that they will do more deals in 2010.  That is grand considering 2009’s lackluster performance when private equity deal value crashed by 65% from $11.96 billion in 2008 to $4.2 billion in 2009, according to data from VCCEdge, the online financial research platform of VCCircle. Similarly, number of deals too fell by 44% from 502 in 2008 to 280 in 2009. (For detailed graphic, click )

Around 62% of VC and PE investors—who were part of the study—said they will ink more deals in 2010. Funds with dry powder (an industry jargon indicating money ready for investing), who spent much of their time in 2009 in the pit stop, will be itching to multiply their portfolio. This is a dramatic change in sentiment as compared to last year, when 54% of the dealmakers surveyed VCCircle felt there will be a slowdown in transactions. Around 17% of the respondents (in this year’s survey) felt that they will not do more deals while the rest predicted the same pace to continue.

The optimism on fresh deal-making stems from the fact that India Inc, which had put its growth plans in the deep freezer during last year, is now ready to thaw them. And, that process will automatically trigger fund-raising. “It’s a snowball effect when corporates (companies) feel that economy has improved and liquidity is coming back,” said Srinivas Chidambaram, managing director, Jacob Ballas Capital India Pvt. Ltd, earlier.

India's 8% GDP growth story, consumption patterns across all levels and strong fundamentals are further fortifying the investment thesis of the alternative asset class. Over 76% of these investors are very excited about the India growth story while 21% are somewhat excited. The decoupling of the BRICs (Brazil, Russia, India and China) economies from the West is now leading to major capital inflows from global investors. But, alongside the optimism lurk mild concerns of whether the growth story is all hype or for real. “The growth story is very much there, but one has to be cautious - the magnitude of the growth story has been mis-assessed several times before," said Alok Mittal, general partner at Canaan Partners.

While deal-making and adding to the portfolio is what catches headlines, ask dealmakers and they will tell you that exit track record is their true litmus test. That is what separates the men from the boys. Exits are among the top-of-the-mind concern for many a VC/PE player, for whom the economic downturn in 2009 has meant more delays in liquidity events (or the act of cashing out through an IPO, trade sale or secondary sale). Several PE & VC players lined up some exits in 2008 and 2009 but were not able to ahead due to the steep fall in valuations post Lehman Brothers bankruptcy.

The reassuring news is that over 65% deal-makers feel that the exit environment will improve in 2010 while 17% feel the other way. On the backdrop of a stock market rally and increasing valuations, investors are seeing this as a good time to cash out. From January 1 to December 29 this year, the Bombay Stock Exchange index has shot up by over 75%.

Many might also be looking bring in liquidity into their portfolio by way of a public issue. About 72% of the respondents say, their typical holding period is more than four years while the rest feel they they should hold on for 2-4 years.

The opening of the primary markets has ruled in favour of positive exit sentiments. More than 50% of the respondents feel that strategic sale will be a likely exit route, while nearly 60% feel that IPOs (initial public offering) are the likely avenue. Around 25% feel that secondaries (when original private equity investors sell to another player) may also be a good exit option. This comes as a surprise because only 7% of respondents in our 2009 outlook voted for exits via IPO while 73% ruled in favour of strategic sales.

Investors seem to be split on the subject of valuations. While 41% respondents expect realistic valuations, a similar number (44%) said, they expect companies to be overvalued in 2010. Unrealistic valuations may play spoilsport in dealmaking as many investors already feel that Indian companies are already expensive. Volatility in the market index may further lead to an uncertainty over valuations and could delay deal closures.

Investment bankers, who took part of the survey, feel that mergers and acquisitions (M&A) activity in 2010 could be dominated by inbound deals with multinationals looking to buy into the India growth story.

So, to sum it up, VCCircle Deal Outlook 2010 shows that investors are positive and bullish on three counts: Deal flow, India growth investment thesis and favourable exit environment.  IF things do end up looking like this at the end of 2010, it would truly mean evolution to the next level for the industry.

VCCircle wishes to thank all participants who spared their valuable time to take part in the Deal Outlook 2010 Survey. The survey, which attempts to capture the mood and sentiment of the PE/VC industry, has helped us bring out some very early trends of things to come in 2010. I am sure the readers of this website and industry trackers will find the results extremely useful.