Ola raises $400M Series E round from DST, GIC, Falcon Edge & others; valued at $2.4B
Advertisement

Other new investors include GIC and Falcon Edge Capital. SoftBank, Tiger Global, Steadview Capital and Accel Partners US are the existing investors which participated.

The firm did not give a breakdown of the money brought in by the investors but DST, which backed India’s largest e-com venture Flipkart last year, brought in Rs 1,153 crore ($185 million) and has picked 7.6 per cent stake, becoming the fourth-largest shareholder in the company behind SoftBank, Tiger Global and Matrix Partners.

SoftBank is believed to have put in around $90 million to retain its near 26 per cent stake. Tiger Global brought in $40 million.

Russian billionaire and founder of DST Global, Yuri Milner, who had previously invested in his personal capacity also put in some more money in the round, it is learnt.

This completes the funding round which sought to raise as much as Rs 2,520 crore and had raised bulk of it last week (click here for more on that).

The latest deal values Ola at $2.4 billion (post money), almost four times its valuation in October when Japan's SoftBank led a $210 million funding round in the company, as per VCCircle estimates. 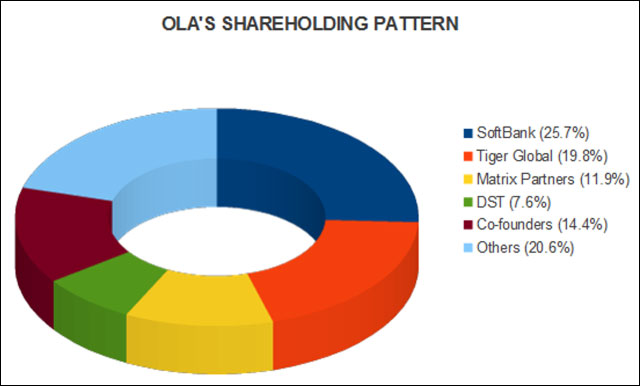 Ola said the funds will be used to go deeper into smaller cities and to build technology. It said the firm has expanded to 100 cities in the current year from 10 cities a year ago and plans to be in 200 cities by the end of this year.

“DST Global, GIC and Falcon Edge have been partners in some of the leading Internet success stories globally and we are excited about having them onboard. With increasing smartphone penetration and immense growth in smaller cities and towns, we will be able to drive the benefits of this on-demand platform deeper into the lives of our customers and partners,” said Bhavish Aggarwal, co-founder and CEO, Ola.

“Ola offers a strong value proposition for both users and drivers and is transforming personal transportation in India,” said Rahul Mehta, managing partner, DST Global. Mehta is also among the handful of small investors in the firm.

In March, it also went beyond transportation to add a local food ordering-cum-delivery feature OlaCafé. Currently available in beta across a few areas in four cities, it aims to use cab or auto drivers on the network who do not have a passenger to pick-up meals from restaurants to be delivered to consumers. The firm is also looking to start delivering grocery as part of the same initiative.

The latest round takes the total funding in Ola to $677 million. It had earlier raised $277 million from SoftBank, Tiger Global, Matrix Partners, Sequoia Capital and Steadview Capital, among others. In October 2014, Ola raised $210 million in a funding round led by SoftBank.

Among the new investors, for Falcon Edge, this is the third deal in Indian tech space in the past five months. In December, it backed property listing venture Housing.com and early this year invested in News Hunt.

For GIC, too, this marks a new-found love in Indian technology ventures. The sovereign wealth fund of Singapore had last year invested in India's top e-commerce venture Flipkart along with DST.

HROne secures Series A funding from Insitor and Prudent

Why startups are leaving Esop expenses out of Ebitda calculations