In an outlook-piece released by the New York-based private investment firm's head of global macro and asset allocation Henry H McVey noted that while the recent downturn in both valuations and return on equity might suggest that now is the time to begin buying public emerging market equities en masse, he does not hold that view.

“....our view is to remain selective as well as to consider alternative ways to gain exposure to important EM macro themes such as rising GDP-per-capita and corporate deleveraging,” he said.

McVey pointed to factors such as leverage remaining near all-time highs, which likely means further dilution for equity holders. He also pointed out that currency will remain a headwind for some time- particularly as the US Fed begins raising rates, and emerging markets underperformance cycles tend to run long, with an average of 91 months versus just 55 months of this cycle.

“As such, it appears time is still on the side of the patient investor,” he said.

The overall investment thesis has been put under three buckets:

* Focus on reform-minded stories with not only strong leaders but also strong central bankers. He names Mexico and India as fitting this criteria but acknowledged that these are expensive markets, but said he likes the potential upside if earnings come through and inflation remains in check. In particular, he talked about Mexican mid-cap companies, particularly in real estate and consumer-related areas, while in India he favoured cyclical companies with upside to 2016 EPS estimates as attractive. In comparison, he retained a more cautious outlook for Indonesia awaiting greater clarity around new Indonesian President Joko Widodo business and political agenda.

* McVey also favoured countries where central bank policy is accommodative against a backdrop of low/falling inflation and said at the moment he still favours China. “Importantly, we think that slower growth is actually better for Chinese stocks because it signals fewer excesses as well as the ability for the government to be more accommodative. However, we fully appreciate that the tech and growth sectors in China now look expensive, and as such, we are focusing more on lower beta names and restructuring stories,” he said.

* At the same time he said he wants to avoid markets that have benefited mightily from the China Growth Miracle during the prior decade (especially commodity driven economies), particularly if inflation is high in those countries. Hence, he marked countries like Brazil, Russia and Malaysia as representing near-term areas of caution.

Here are some other key points he made about India and emerging markets as a whole: 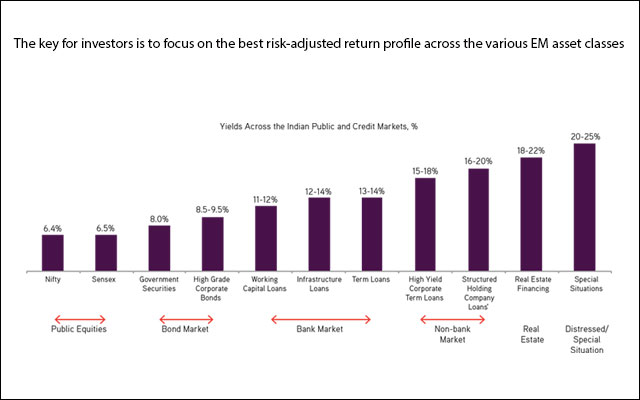 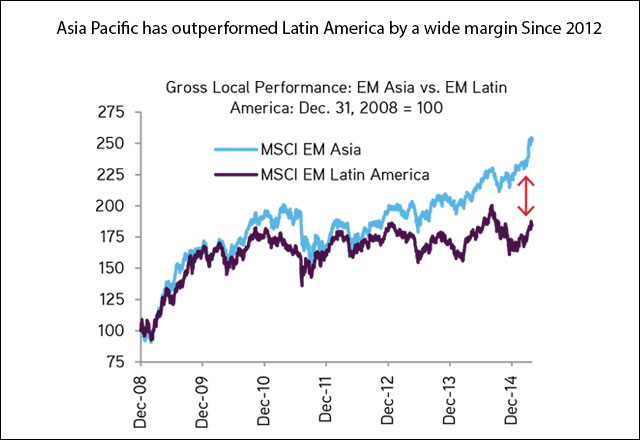 McVey notes that damage to large cap Latin American companies like Petrobras (mired by corruption scandal) has played a part in the region’s dramatic underperformance.

He also pointed out the four key reasons why emerging markets as a whole have disappointed, referring to shrinking equity multiples in public markets, currency depreciation, corporate earnings lagging behind expectations due to margin degradation and equity dilution and stock indices having major skews or concentration levered to a particular product cycle, commodity or state-owned enterprise. 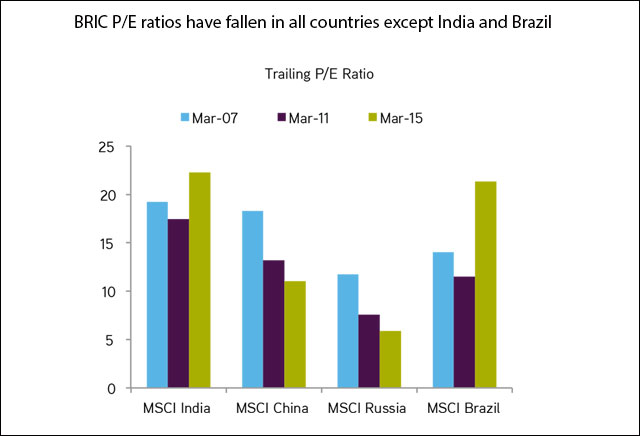 Another aspect is valuations in India now (data as of March 31, 2015: stock indices have corrected since then) is much higher than what they were in March 2007. Year 2007 was the peak of the previous bull-run which collapsed with the financial crisis instigated by the sub-prime mortgage market in the West. The report notes how India and Brazil are the only two among the BRIC pack to sport a high price to earnings multiple now.

McVey also makes an important note that how returns on equity in India was a big differentiator for the country within BRIC back in 2007 and how it has now almost halved. 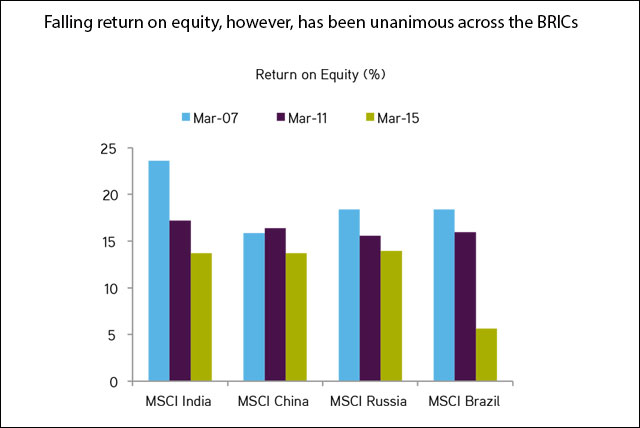 He shows how RoE in India is now at par with that in China and Russia, though this has shrunk even more dramatically in Brazil. Overall, every BRIC economy has seen RoE decline during the period.