It's been two very different stories for Amazon and Facebook this summer. Amazon's market cap has risen about 20%, while Facebook lost about 50% of its market value. 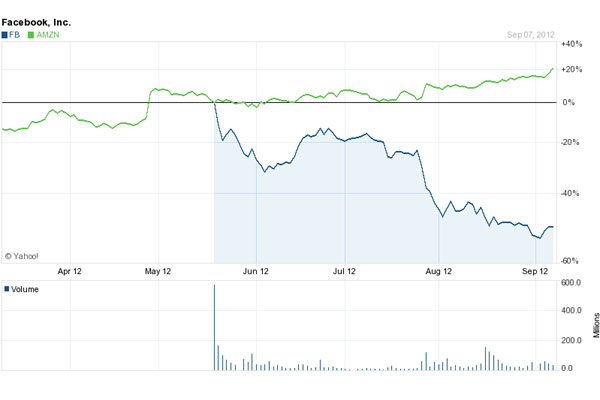 Why this has happened was somewhat encapsulated in each company's headlines last week.

Amazon announced it was releasing 2 new eReaders under the Paperwhite name requiring no external light source starting at $119. Additionally, Kindles for $69 will be available this week. These actions expand the market for eReaders, already dominated by Amazon, providing for additional growth and lowering a kaboom on the Barnes & Noble Nook which is partnered with Microsoft.

Offering more functionality and lower prices gives Amazon an even larger lead in the ereader market while simultaneously expanding demand for digital reading giving Amazon more strength versus traditional publishers and the printed book market. Despite a "nosebleed" high historical price/earnings multiple close to 300, investors, like customers, were charged up to see the opportunities for ongoing growth from new products.

On the other hand, Facebook spent last week explaining to investors a set of decisions being made to prop up the stock price. The CEO promised not to sell any stock for several months, and explained that the company would not sell more stock to cover taxes on stock-based compensation - even though that was the original plan. He even tried to promote the avoided transaction as some kind of stock buyback, although there was no stock buyback.

Facebook was focused on financial machinations - which have nothing to do with growing the company's revenues or profits. That the company avoided selling more stock at its deflated prices does help earnings per share, but what's more important is the fact that now $2B will be taken out of cash reserves to pay those taxes. $2B which won't be spent on new product development, or other activities oriented toward growth.

Although I am very bullish on Facebook, last week was not a good sign. A young CEO is clearly feeling heat over the stock value, even though he has control of the company regardless of share price. It gave the indication that he wanted to mollify investors rather than focus on producing better results - which is what Facebook has to do if it really wants to make investors happy. Rather than doing what he always promised to do, which was make the world's best network offering users the best experience, his attention was diverted to issues that have absolutely no long-term value, and in the short term reduce resources for fulfilling the long-term mission.

Given the choice between

1) a company talking about how it plans to grow revenues and profits, and maintain market domination while outflanking the introduction of new Microsoft products, or

2) a company apologetic about its IPO, fixated on its declining stock price and apparently diverting focus away from markets and solutions toward financial machinations

which would you choose? Both may have gone up in value last week - but clearly Mr. Bezos showed he was leading his company, while Mr. Zuckerberg came off looking like he was floundering.

As you look at the announcements from your company, over the last year and anticipate going forward, what do you see? Are there lots of announcements about new technology applications and product advancements that open new markets for growing revenue while warding off (and making outdated) competitors? Or is more time spent talking about layoffs, cost cutting efforts, price adjustments to maintain market share, stock buybacks intended to prop up the value, stock (or company) splits, asset (or division) sales, expense reductions, reorganizations or adjustments intended to improve earnings per share?

If its the former, congratulations! You're acting like Amazon. You're talking about how you are whupping competitors and creating growth for investors, employees and suppliers. But if it's the latter perhaps you understand why your equity value isn't rising, employees are disgruntled and suppliers are worried.

SoftBank to offload half of its stake in PolicyBazaar

US firm Perfect Day to invest in Sterling Biotech under bankruptcy; to invest 1.5x more