A premium product but an economical price tag. That is what yoga guru Baba Ramdev-backed brand Patanjali Ayurved promises customers. That strategy has worked, with Patanjali Ayurved Ltd, which flaunts its ‘Make in India’ roots, set to touch the Rs 5000 turnover mark in FY16.

Keeping prices low has been the cornerstone of Patanjali's marketing strategy. For instance, a 250 gm bottle of honey from Patanjali Ayurved Ltd comes for Rs 70. In contrast, market leader Dabur India sells the same pack size at Rs 120. Similarly, chyawanprash, one of the first products from the Haridwar-based company, is priced at Rs 250 for a 1000 gm jar. A 900 gm jar of chyawanprash from Dabur comes with a Rs 300 price tag.

“We arrive at the price by calculating the cost of raw material, administration, processing cost and a bit of margin for sustenance,” says Acharya Balkrishna, managing director, Patanjali Ayurved, and Baba Ramdev’s close confidant.

While its pricing strategy isn't anything new, it has helped in attracting eyeballs, especially in a price-sensitive market like India. “Any newcomer who enters the market tries to make a dent by crashing the price. Patanjali has also followed the same strategy,” explains Rajat Wahi, partner and head, consumer markets, KPMG in India, an audit firm.

However, Wahi says the big question is how long the company will be able to sustain its low pricing strategy.

Going by the latest IIFL Institutional Equities report, it seems Patanajali is already revising its strategy. The report states that there has been an increase in prices of popular products such as toothpastes and shampoos over the past few years. A 100 gm tube of Dant Kanti toothpaste, one of its top-selling products now sells for Rs 40 against Rs 28 earlier. Similarly, shampoo, a category which it entered much later has also witnessed price revisions. The price of a 200 ml bottle of Kesh Kanti Natural shampoo has gone up from Rs 68 to Rs 75. The company has also increased the price of its anti-dandruff shampoo from Rs 85 to Rs 95 (200 ml).

The IIFL Institutional Equities states that by FY20, Patanjali is expected to have double-digit market share in 10 of the 25 categories including ghee (33 per cent), and chyawanprash (30 per cent). It projects a revenue of Rs 3,100 crore from the sale of its ghee by FY20.

Balkrishna says that as a company Patanjali is not competing against anyone. “Each one of us is trying to do a good job, so that eventually people benefit from it,” he explains.

Yet, even as the firm has increased the price for some of its products, the low price points have helped in sampling of its products, ultimately resulting in high sales. “In India, people do not mind testing a new product if it does not pinch their pockets,” says N Chandramouli, CEO, Trust Research Advisory (TRA), a brand intelligence and data insights company.

With a cult following, a television channel, and yoga shows round the country, Patanjali’s brand campaign is already at the halfway mark before it even starts

To be sure, the low pricing strategy does not impress everyone. “Low price points always raise questions about product quality. If other companies have been charging a certain rate for the same kind of products, how is Patanjali able to sell it at a much lower price,” asks Anil Verma, a resident of upscale Defence Colony in Delhi.

Patanjali has also been adopting the marketing tactics of its competitors, which could alienate customers who trust the brand’s promise of purity. Its instant noodles brand, launched just before one-time market leader Maggi returned to store shelves, was named Atta Noodles, thus downplaying the fact that it was actually a 50:50 blend of atta and maida.

Last December, a quality test was done on Patanjali's Ghee by the Food Safety and Standards Authority of India (FSSAI) after much debate on social media on its perceived quality.

That is where Baba Ramdev’s charisma comes in. With a cult following, a television channel, and his yoga shows round the country, Patanjali’s brand campaign is already at the halfway mark before it has even started. 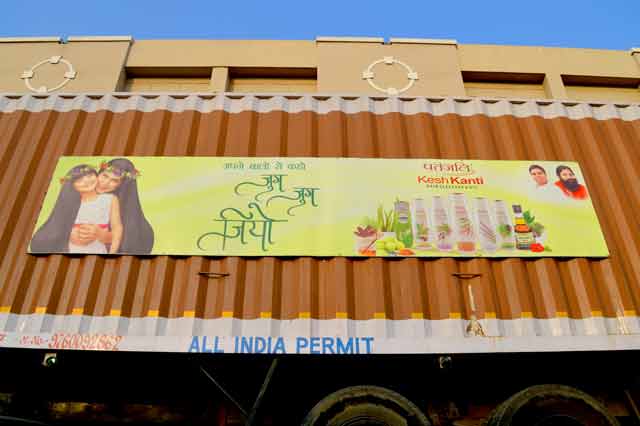 A hoarding showcasing Patanjali products on a truck

This has also helped the brand keep a tight lease on its advertising spend.

As Balkrishna unabashedly admits, Patajali has bought media inventory at a discounted rate, which has helped the company in controlling the ad spend.

The company wants simple ads just to disseminate information about its brands, says Balkrishna. “We don't make any false promises in our ads. The ads are more like infomercials,” he adds.

For DDB Mudra Group which handles the creative duties for Patanjali Ghee, Atta and Dant Kanti, the creative brief was to inject the communication with a brand proposition.

“The ads for Patanjali talk about the product and its promise to consumers. The idea was to make interesting ads but not boring ones,” says Vandana Das, president, North, DDB Mudra Group.

Infomercial or not, brand evangelists say that the simple ads by Patanjali have helped in winning consumers' confidence. “While the whole world is creating theme based ads, here is one company which has stayed away from all the razzle dazzle. Straight talk, with no fluff, has helped in creating the trust factor,” says Harish Bijoor, brand strategy expert and CEO, Harish Bijoor Consults Inc, a consulting firm which specialises in brand and business strategy.

According to Bijoor, 32 per cent of the ads released by brands are tagged by consumers as ‘false’.

Even as the company is riding on its charitable trust tag, Bijoor says it cannot continue doing so forever. “It will be forced to behave like any other FMCG company soon, even in case of its communication,” he explains.

The meteoric rise of the company, parallel to the ascendancy of the Bharatiya Janata Party (BJP) to power, has also raised many eyebrows. Baba Ramdev is seen to be close to the BJP and its affiliates, sharing similar views on several subjects.

Balkrishna, however, dismisses talk of any such linkages and says all the talk about Patanjali has actually helped it grow. “We have never had the government's backing. In fact, we have openly protested against some of the ideas of the BJP-led government. As for the quality of our products, the FSSAI test results on Patanjali Ghee say it all,” he says.