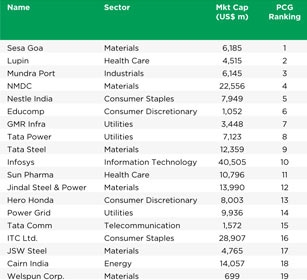 Inflation, twin deficits, fear of rate hikes by the central bank, tight liquidity, corruption scandals and attendant reversal of FII flows are the multiple nearterm headwinds facing the Indian market at present. After a difficult Q4 CY10, the choppiness has continued in the new year and India is the worst performing emerging market YTD, down 7%.

For most of 2009 and 2010 we were in a “rising tide lifts all boats” market which was somewhat indiscriminate; some of the best performers were the stocks that had been hammered in 2008, such as real estate. But the environment has now changed. Whilst the global outlook has (somewhat) improved, the local outlook has clouded. In this environment, where should the risk averse investor focus?

Intuition and experience suggest strong, consistent cash generators. But does the back testing support this view for India? Given GDP growth approaching 9%, revenue and net income growth are generally the overwhelming focus of the Indian market. We’ve retained the growth emphasis but not at the expense of cash generation.

We took 10 years of data for the BSE 100, and analysed various permutations of cashflows for all ex-Financials stocks over the period to try to identify the optimal strategy. Our top and bottom quartile stocks ended up being selected on the basis of:

Both the top and bottom quartiles outperformed and underperformed, respectively, the BSE 100 ex finance in 4 out of 6 years. The underperformance came in FY08, driven mainly by TCS and Infosys which saw their overseas operations hard hit in the 2008 meltdown, and in FY10 in the bottom portfolio there was a sharper recovery after a 60% fall in FY09.

Our backtests of operating cash flow highlight that the companies that generate positive, consistent and growing (PCG) operating cash flows for a 5 year period tend to outperform. The backtesting was done using constituents of BSE 100 excluding financials for the period FY05-FY10. We assigned weights to each criteria of PCG as indicated below:-

1) Positive (30% Weight): The Company must have had a positive operating cash

flow in each of the past 5 years

2) Consistent (30% Weight): The company must have grown operating cash flow in

at least 3 of the last 5 years

Through applying a weighting to each criteria we then selected the top and bottom quartiles in each year. When there were several companies that ranked equally under the above criteria we ranked them on average 5 year growth in operating cash flow.

The top and the bottom quartile outperformed and underperformed, respectively, the BSE 100 ex finance universe barring a couple of years. The anomaly to our strategy in FY08 can be explained by the external recessionary pressures felt by the market. Excluding TCS (-34%) and Infosys (-28%), both of whom saw their overseas operations hit hard by the sub-prime crisis, the top quartile outperformed the benchmark by 8%.

FY10 witnessed the recovery in the equity markets as the global economy started showing signs of recovery. The stocks that had fallen the most in FY09, recovered at a faster pace. The bottom quartile universe, that outperformed the broader market by 49% in FY10, had fallen by around 60% in FY09.

The evidence suggests this strategy works better in more challenging years for the stock market. On current evidence 2011 is shaping up to be exactly that.

Taking cues from our backtesting we identified the top and bottom quartiles in the BSE 100 ex financials, based on historic and estimated cash flows, which we think should outperform the benchmark in the year ahead. The portfolios are sorted on the basis of our PCG ranking (Positive, Consistent & Growing).