New York-based Brahma Management, an India-focused investment firm managing assets of over $500 million, is scaling up its real estate development play in the national capital region (NCR). Brahma has struck Rs 600-650 crore deal for aggregating a 152-acre land parcel in  Gurgaon, its second land deal in the area, and has obtained licence from Haryana Government for building a five million sqft township.

The project, Brahma City, will come up in Gurgaon’s Sector 62 and 63 just off the Golf Course Extension Road.  The development cost of the project is estimated at around $200 million conservatively.

In May this year, Brahma paid Rs 620 crore outbidding Bharti Group and Unitech to clinch Haryana State Industrial Development Corporation (HSIDC)’s auction of 13-acre land parcel on NH-8 near Japanese College and Palm Court in Gurgaon. The fund is yet to unveil development  plans on this land.

Brahma City Project will be 74% owned by Brahma Management, which also took control of Cobra Beer India Pvt Ltd in 2010. The fund has not disclosed the other shareholders in the project. “The total    development will be northwards of 5 million sqft. Residential units will be around 4.5 million sqft, while the remaining will be commercial development,” Gulbir Madan (in pic), Founder & Managing Partner, Brahma Management told VCCircle from New York last weekend.

“The development cost will be Rs 1500 per sqft, or more depending on our final plan. There will be contiguous green around the residential project with every unit having access to it,” Madan added. Brahma has brought on board Montreal-headquartered ARCOP, headed by Ramesh   Khosla, as design architects for Brahma City.

A senior executive at an MNC real estate broking firm said the going price for wholesale (large) land deals was anywhere between Rs 3-4 crore. “I would reckon that Brahma is at the lower end of the price band due to the size of the land parcel. The deal may be significant as it is not easy any longer to mop up over 100 acres (needed for state government license to develop township) in Gurgaon,” said this honcho, who is not authorized to speak to the media.

Brahma Management came into the limelight when it upped the ante on dealmaking this year. Earlier, it had entered into a partnership with DLF for a large integrated township at Panchkula in Haryana.  The first phase of the Panchkula project has 2 million sqft development even as Brahma is wrapping up marketing of the second phase development currently.

Real estate deals - of both raw land as well as developments - are on the rise once again as India's economy grew 8.8% in the last quarter. With consumer spending reviving, real estate led by the residential segment has vaulted back after some of India's top developers tottered in the wake of the global financial crisis. 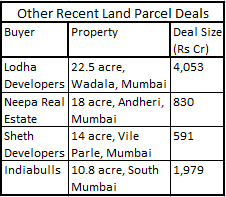 Till now, there have 23 private equity deals worth $719 million in this calendar year, according to VCCEdge. Apart from deals in the NCR, there have been a slew high profile land parcel deals in Mumbai. In the city's largest deal, Lodha Developers acquired a 22.5-acre plot Wadala for Rs.4,053 crore in May this year. More recently, Borosil Glass Works sold an 18 acre property in Marol, Andheri, to Neepa Real Estate for Rs 830 crore last month.

Brahma conserved the capital since the time global economy went into a tailspin by early 2008, and has just started loosening the purse strings as activity picks up especially in India. Brahma makes both private and public investments in India across sectors such as real estate, industrials, media, education and consumer. It invests across assets like hedge fund, traditional corporate private equity, real estate and mezzanine debt. Brahma is based out of New York with office in Mumbai and New Delhi.