India will invest as much as Rs 3.96 lakh crore to boost it’s the infrastructure sector in FY2017-18, Finance Minister Arun Jaitley said, even as he unveiled the largest ever allocation for the railways.

Jaitley said the government will pump a little over Rs 2.4 lakh crore into the transport sector, of which Rs 1.31 lakh crore will go to the railways, a little less than half of which will, in turn, come in the form of gross budgetary support.

Unveiling the first ever integrated budget (the separate railway budget has been done away with for the first time since 1924), Jaitley said the railways is now at “the centre-stage of the government’s fiscal policy.” This, he said, will facilitate a “multi-modal transport planning between railways, highways and inland waterways.”

The railways, which saw its throughput go up by 10%, will also get to list its subsidiaries—Indian Railways Catering and Tourism Corp, Indian Railway Finance Corp and Ircon International—and will lay 3,500 kms of new tracks in the coming year. The transporter, which has received flak for a spate of accidents that have resulted in scores of fatalities, will also get a new safety fund, for which Rs 1 lakh crore will be allocated.

The other major beneficiary of Jaitley’s largesse has been the highways sector, with the national highways getting a Rs 64,000 crore push, and Rs 19,000 crore going towards rural roads via the Pradhan Mantri Gram Sadak Yojana.

Moreover, Jaitley proposed that the Airports Authority of India Act will be amended to help the AAI monetise excess land for airport development. In addition, the finance minister said new airports will be developed via the public private partnership (PPP) route across select tier-2 cities. 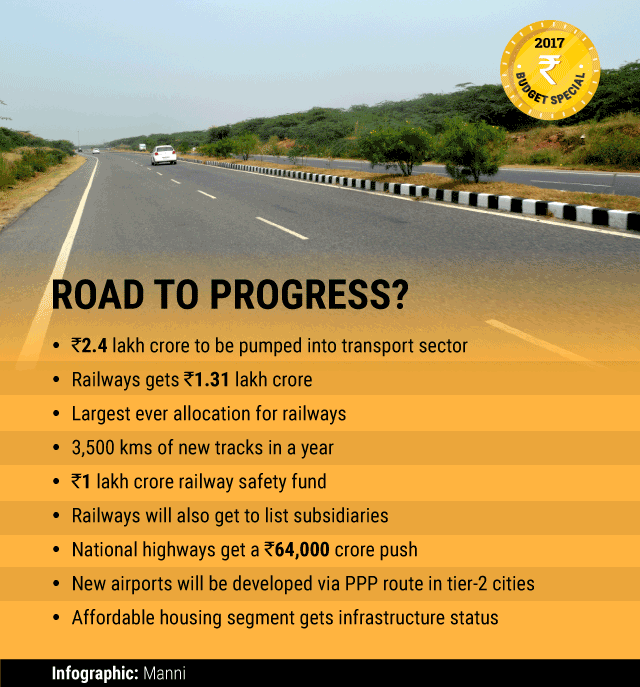 The real estate sector, which has had to face the brunt of demonetisation, could begin to look up with the government unveiling a slew of sops for the affordable housing segment. The finance minister acceded to a long-term industry demand by granting infrastructure status to affordable housing, which will attract investors into this segment.

Apart from changes in provisions for the built-up and carpet areas which had been stipulated in the affordable housing scheme announced last year, Jailey also increased the holding period for considering long-term capital gains from three to five years. “This move will significantly reduce the capital gain tax liability while encouraging the mobility of assets. We also plan to extend the basket of financial instruments in which the capital gains can be invested without payment of tax,” the finance minister said.

Vijay Agrawal, executive director at Equirus Capital, said the government’s proposals on affordable housing will enable companies in the segment to borrow long-term and external commercial funds at lower interest rates. “They will also be able to undertake long-gestation projects like affordable housing townships. This will help increase supply of affordable housing to achieve dream of Housing for All by 2022,” he said.

SAIF-backed Bobble AI bounces back after down round; Xiaomi, angels big gainers
TMT
Podcast: DocsApp’s Satish Kannan on journey from incubation to merger with Medibuddy
Healthcare