India's wholesale price index (WPI)-based inflation came in at 7.81% y/y for September, broadly in line with expectations (Barclays: 7.9%; consensus: 7.7%). The jump up in inflation in September (from 7.55% in August) was largely a result of the hike in diesel prices. It needs to be noted, however, that the official statistics are exhibiting an increase of ~9% m/m in diesel prices, while the actual hike was over 12%. This could be due to the fact that such a hike was not effective for all the weeks of the month and consequently is potentially understating the headline print by ~15bp in September.

“Core” inflation remained unchanged at ~5.6% y/y. Among the major constituents of core, base metals and chemicals price inflation softened a tad in September, while textiles witnessed a mild uptick. While core inflation moved up to the current level in the last two months (from ~5% y/y earlier), we do not expect any further meaningful upside in core inflation and forecast it to soften to sub-5% in Q1 2013. Food inflation softened to 7.9% y/y in September from 9.1% in August. However, this should not necessarily be considered a trend, in our view. 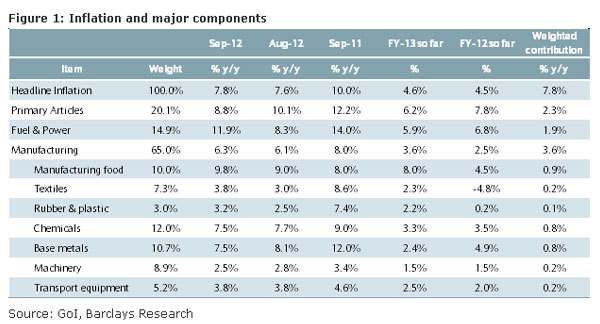 The inflation for July 2012, which was reported earlier at 6.87% y/y, was revised up to 7.52%. A large part of the revision (~35bp) was, however, due to increased electricity tariffs, which were raised effective from June 2012. But it was not captured at the time the provisional inflation numbers for July 2012 were compiled. Given that the provisional data captured the effect of the electricity tariff hike from August 2012 onwards, the revision in inflation data should not be as large from next month onwards. 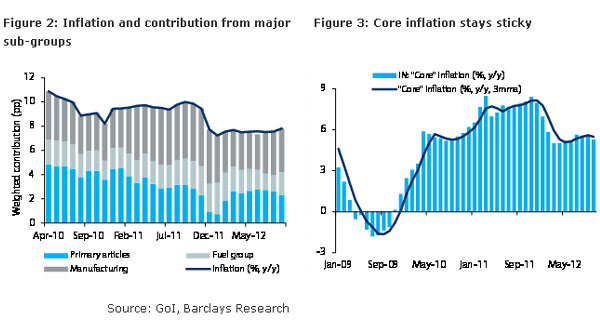 India’s industrial production (IP) for August, released last Friday, recovered marginally in August to 2.7% y/y from a decline of 0.2% y/y in July. The improvement in the IP print in August was driven largely by consumer goods (5.0%, y/y), while capital goods (1.7% decline) and intermediate goods (1.9%) continue to be weak. The lead indicators for IP remain mixed – while the purchase managers’ index (PMI) indicates a somewhat better stability, auto production has turned weak in recent months. The markedly favourable base in the coming months (H2 FY 11-12 average IP growth was ~1% y/y vis-à-vis ~5% in H1) will float the IP growth prints a bit in H2 FY 12-13. However, that should not be seen as any major turnaround in the momentum in industrial activity.

Current inflation print not enough for an October cut

Policymakers remain in a tough spot – constrained by high inflation, but with a clear need to support growth over the medium term. The Reserve Bank of India’s (RBI) growth projection of 6.5% for FY 12-13 now looks increasingly optimistic (Barclays: 5.8%). Given this situation, we think eventually the policy focus would have to turn more balanced between inflation and growth. Of late, the upward adjustment in fuel prices, the slew of other policy initiatives from the government, and a pullback in INR have offered the RBI some breathing room, in our view.

However, core inflation, at over 5.5% y/y, remains a constraint for the RBI to cut policy rates just yet. The headline inflation also remains close to 8% and can potentially go up further in the coming 2-3 months. We maintain the view that the RBI will reduce the repo rate in Q1 2013, while continuing to focus on supporting liquidity in the near term, with the possibilities of employing open market operations (OMOs) and/or a reduction in the cash reserve ratio (CRR).

On the other hand, the Finance Minister’s recent media statements can arguably be considered as his preference for a softer interest rate regime. Thus, it will be interesting to see whether the central bank’s actions in October resemble such a stance.