Sell Google – Lot Of Heat, Not Much Light

With revenues up 39% last quarter, it’s far too soon to declare the death of Google.  Even in techville, where things happen quickly, the multi-year string of double-digit higher revenues insures survival – at least for a while.

However, there are a lot of problems at Google which indicate it is not a good long-term hold for investors.  For traders there is probably money to be made, as this long-term chart indicates: 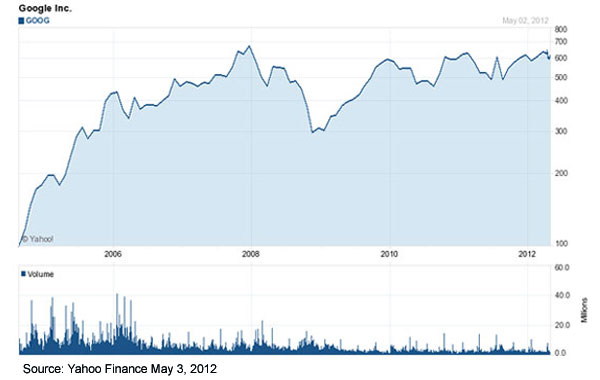 While there has been enormous volatility, Google has yet to return to its 2007 highs and struggles to climb out of the low $600/share price range.  And there’s good reason, because Google management has done more to circle the wagons in self-defense than it has done to create new product markets.

What was the last exciting product you can think of from Google?  Something that was truly new, innovative and being developed into a market changer?  Most likely, whatever you named is something that has recently been killed, or receiving precious little management attention.  For a company that prided itself on innovation – even reportedly giving all employees 20% of their time to do whatever they wanted – we see management actions that are decidedly not about promoting innovation into the market, or making sustainable efforts to create new markets:

All of these had opportunities to redefine markets.  So what did Google do with these redeployed resources:

In both markets, mobile phones and social media, Google has acted very unlike the Google of 2000 that innovated its way to the top of web revenues, and profits. Instead of developing new markets, Google has chosen to undertaking 2 Goliath battles with enormously successful market leaders, but without any real advantage.

Google has actually proven, since peaking in 2007, that its leadership is remarkably old-fashioned, in the worst kind of way.  Instead of focusing on developing new markets and opportunities, management keeps focusing on defending and extending its traditional search business – and has proven completely inept at developing any new revenue streams.  Google bought both YouTube and Blogger, which have enormous user bases and attract incredible volumes of page views – but has yet to figure out how to monetize either, after several years.

For its new market innovations, rather than setting up teams dedicated to turning its innovations into profitable revenue growth engines Google leadership keeps making binary decisions.  Messrs. Page and Brin either decide the product and market aren’t self-developing, and kill the products, or simply ignore the business opportunity and lets it drift.  Much like Microsoft – which has remained focused on Windows and Office while letting its Zune, mobile and other products drift into oblivion – or lose huge amounts of money like Bing and for years XBox.

I personalized that last comment onto the Google founders intentionally.  The biggest news out of Google lately has been a pure financial machination done for purely political reasons.  Announcing a stock dividend that effectively creates a 2-for-1 split, only creating a new class of non-voting “C” stock to make sure the founders never lose voting control.  This was adding belt to suspenders, because the founders already own the Class B stock giving them 66% voting control.  The purpose was purely to make sure nobody every tries to buy, or otherwise take over Google, because the founders will always have enough votes to make such an action impossible.

The founders explained this as necessary so they could retain control and make “big bets.” If “big bets” means dumping billions into also-ran products as late entrants, then they have good reason to fear losing company control.  Making big bets isn’t how you win in the information technology industry.  You win by creating new markets, with new solutions, before the competition does it.

Apple’s huge wins in iPod, iTouch, iTunes, iPhone and iPad weren’t “big bets.”  The Apple R&D budget is 1/8 Microsoft’s.  It’s not big bets that win, its developing innovation, putting it into the market, shepharding it through a series of learning cycles to make it better and better and meeting previously unmet – often unidentified – needs.  And that’s not what the enormous investments in mobile handsets and Google+ are about.

Although this stock split has no real impact on Google today, it is a signal.  A signal of a leadership team more obsessed with their own control than doing good for investors.  It is clearly a diversion from creating new products, and opening new markets.  But it was the centerpiece of communication at the last earnings call.  And that is a avery bad signal for investors.  A signal that the leaders see things likely to become much worse, with cash going out and revenue struggling, before too long.  So they are acting now to protect themselves.

Meanwhile, even as revenues grew 39% last quarter, there are signs of problems in Google’s “core” market leadership is so fixated on defending.  As this chart shows, while volume of paid ads is going up, the price is now going down. 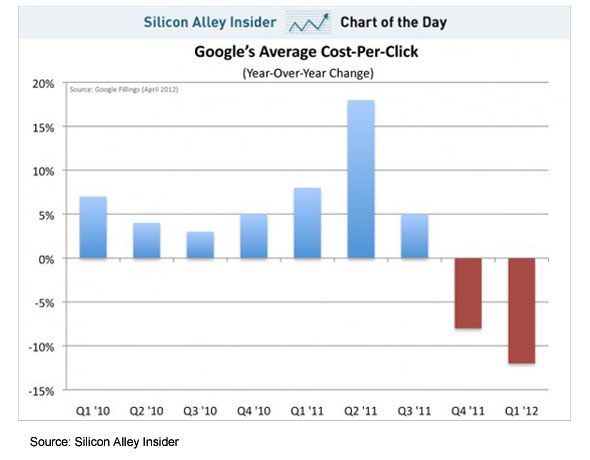 Prices go down when your product loses value.  You have to chase revenue.  Remember Proctor & Gamble’s “Basics” product line launch?  Chasing revenue by cutting price.  In the short-term it can be helpful, but long-term it is not in your best interest.  Google isn’t just cutting price on its incremental sales, but on all sales.  Increasingly advertisers are becoming savvy about what they can expect from search ads, and what they can expect from other venues – like Facebook – and the prices are reflecting expectations.  In a recent Strata survey the top 2 focus for ad executives were “social” (69%) and “display” (71%) – categories where Facebook leads – and both are ahead of “search.”

At Facebook, we know the user base is around 800million.  We also know it’s now the #1 site on the internet – more hits than Google.  And Facebook has much longer average user times on site.  All things attractive to advertisers.  Facebook is acquiring Instagram, which positions it much stronger on mobile devices, thus growing its market.  And while Google was talking about share splits, Facebook recently announced it was making Facebook email integrated into the Facebook platform much easier to use (which is a threat to Gmail) and it was adding a new analytics suite to help advertisers understand ad performance – like they are accustomed to at Google.  All of which increases Facebook’s competitiveness with Google, as customers shift increasingly to social platforms.

As said at the top of this article, Google won’t be gone soon.  But all signs point to a rough road for investors.  The company is ditching its game changing products and dumping enormous sums into me-too efforts trying to catch well healed and well managed market leaders.  The company has not created an ability to take new innovations to market, and remains stuck defending and extending its existing business lines.  And the top leaders just signaled that they weren’t comfortable they could lead the company successfully, so they implemented new programs to make sure nobody could challenge their leadership.

There are big fires burning at Google.  Unfortunately, burning those resources is producing a lot of heat – but not much light on a successful future.  It’s time to sell Google.