It's neither the Bansals of Flipkart nor Vijay Shekhar Sharma of Paytm. India's richest new-age tech entrepreneur is Divyank Turakhia, founder and CEO of ad-tech firm Media.net, according to the latest Hurun India Rich List. The private wealth-tracker estimates that the 35-year-old Dubai resident, who sold Media.net for $900 million in an all-cash deal last year, is worth an eye-popping Rs 11,000 crore ($1.76 billion).

The serial entrepreneur cashed out from his previous venture, Directi Web Technology Pvt. Ltd, in 2014, and is running a number of other businesses and investments, according to Hurun. He is not just India's richest under-40 entrepreneur but the 70th richest Indian, too.

While a portion of the total assets may go to his elder brother Bhavin Turakhia, the ownership structure shows Divyank as the sole owner, Anas Rahman Junaid, managing director and chief researcher of Hurun Report India, told VCCircle. 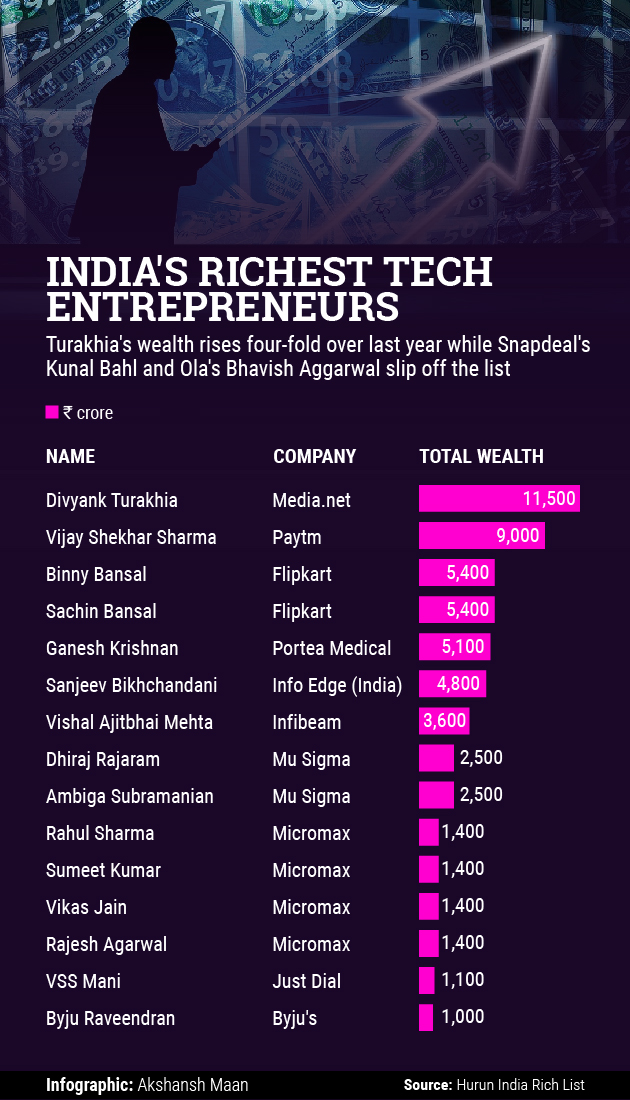 Paytm founder Sharma's wealth rose 23% over last year to Rs 9,000 crore ($1.37 billion), thanks to an increase in the valuation of his digital payments venture. Sharma also made it to the elite list of India’s richest 100 individuals.

Flipkart’s Sachin Bansal and Binny Bansal came in a joint third with an estimated wealth of Rs 5,400 crore ($825 million) each, unchanged from last year. “Flipkart founders together owned 7.9% last year when the company was valued around $11 billion. This year, at around pretty much the same valuation, their shareholding came down to 6.6%,” said Junaid. The slightly higher valuation after SoftBank's funding in August may have helped Flipkart founders regain lost ground. In fact, a couple of weeks before the funding round, a mutual fund managed by US-based Vanguard Group had marked up Flipkart’s valuation to about $13.7 billion.

Surprisingly, cab-aggregator Ola's founders Bhavish Aggarwal and Ankit Bhati do not feature in the list this year. “We took Rs 1,000 crore net worth as the cut-off and they did not make it this time,” said Junaid. Last year, Ola was valued around $6 billion and the founders together held 11%. “Their stake holding has reduced and valuation is now around $2.5 billion,” he added.

Also conspicuous by absence is Snapdeal co-founder Kunal Bahl, who commanded a wealth of Rs 2,300 crore last year. With Snapdeal now valued close to a sixth of its peak valuation of $6.5 billion, Bahl’s net worth, too, has nosedived.

Besides tech entrepreneurs, the report throws up other interesting information. With a total wealth of Rs 70,000 crore ($10.7 billion), Patanjali Ayurved's primary stakeholder Acharya Balkrishna has stormed into the list of 10 richest Indians. He is now the eighth richest Indian, up from the 17th spot last year. At Rs 29,700 crore ($4.5 billion), supermarket chain D-Mart’s promoter Radhakrishna Damani is another big gainer. Five of his family members have also made it to the list, thanks to a blockbuster public issue early this year.

Interestingly, Reliance Industries owner Mukesh Ambani, who tops the charts with Rs 2,57,900 crore ($40 billion), is almost thrice as rich as Sun Pharma's Dilip Shanghvi, who is a distant second. Lakshmi Mittal, Shiv Nadar, Azim Premji, Cyrus Poonawala, Gautam Adani, Uday Kotak and Sunil Mittal are the others in the top 10.