The financial conditions of the Indian economy have improved with cost of funds falling and liquidity improving, according to a survey jointly done by lobby groups Confederation of Indian Industry (CII) and the Indian Banks’ Association (IBA).

Interestingly, this comes at a time when the outgoing Reserve Bank of India (RBI) governor Raghuram Rajan had asked public sector banks to clean up their books by March 2016. The combined losses of 20 public banks for the March 2016 quarter stood at around Rs.16,272 crore, which included big names such as Punjab National Bank and Bank of Baroda. 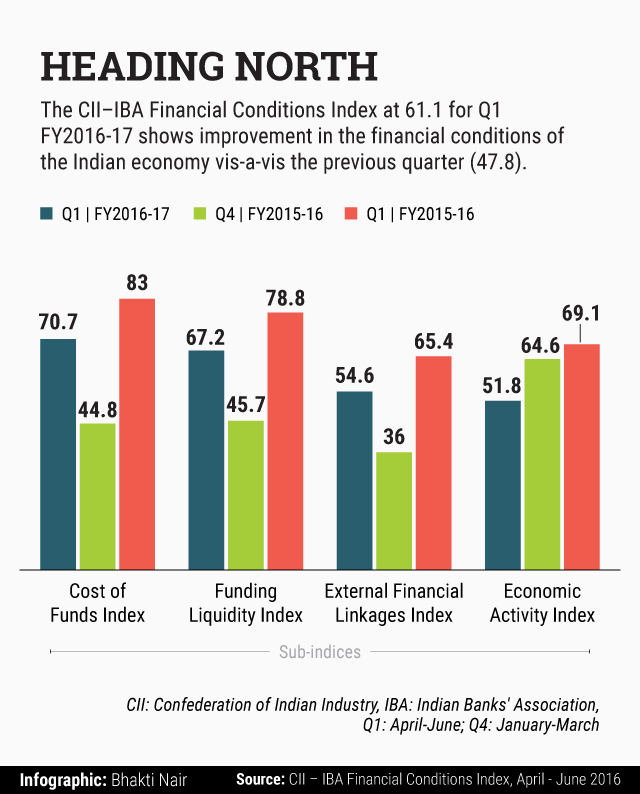 Rajan will be announcing the country’s monetary policy stand on 9 August, which comes in the backdrop of the government targeting to hold central inflation rate at 4%, with a deviation of two percentage points.

According to the report, the growth is credited to strong expectations of leading banks and financial institutions of reduction in cost of funds, comfortable liquidity position and better external financial linkages whereas the overall economic activity also signals improvement.

“There was a strong rebound in the expectation of banks and financial institutions for an improvement in the overall financial conditions index as reflected in a significant improvement in the cost of funds index (70.7), funding liquidity index (67.2) and the external financial linkages index (54.6),” the report said, adding that though economic activity index (51.8) also recorded overall improvement, there was a relative decline in performance from the previous quarter.

The reading of the financial index for the first quarter of financial year 2016-17 was significantly above the 50 mark implying a majority of the respondent banks and financial institutions reporting improvement or no change in the overall financial conditions compared with the deterioration in the previous quarter.

“The directional change in the performance of the Financial Conditions Index augurs well for the Indian financial sector as well as for the real sectors of the economy. We are certain that traversing the external headwinds, the government and the RBI would continue to focus on the twin objectives of maintaining financial stability and enhancing economic growth,” said Chandrajit Banerjee, director general, CII, in a statement.

Experts believe corporate earning numbers have led to the rise in the index.

“Banks no doubt are cleaning up their balance sheets but credit access values need to go up to foresee a significant positive movement in financial conditions in the country,” said Venky Panchapagesan, associate professor of finance, Indian Institute of Management-Bengaluru.

India’s gross domestic product (GDP) expanded 7.9% in the January-March quarter, accelerating from a revised 7.2% in the previous three months. The country’s GDP growth is projected between 7% and 7.75% by the Economic Survey for the current financial year.