Days before the expiry of provisional safeguard duty on steel on 31 March, the National Democratic Alliance government notified its extension till March 2018 as part of its strategy against cheap imports.

The government, however, has made it clear that the safeguard duty shall not be imposed on steel products which are imported at or above the minimum import price (MIP).  MIP helps in setting a floor price, which in turn discourages steel imports below this price.

“After considering the findings of the director general (safeguards), a safeguard duty of 20% will be applicable on steel imports taken place during 14 September 2015 and 13 September 2016,” ministry of finance said in a notification dated 29 March.

With the duty expiring on 31 March 2016, an investigation on 15 March found that a threat exists. The director general of safeguards on 15 March in its final investigation on safeguard duty on hot-rolled flat products of non-alloy and other alloy steel had recommended that the duty be extended for two-and-a-half years effective 14 September 2015. 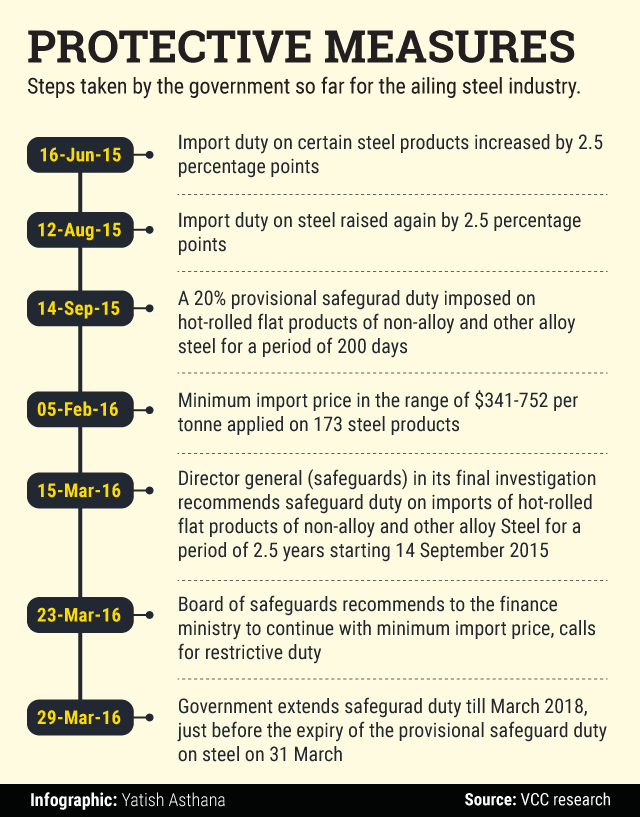 Interestingly, these measures have been put in place despite India’s Economic Survey 2016 presented last month stating that any future safeguards for the steel industry may not be in the best interest of the downstream industries.

With the MIP imposed on 173 types of steel products in the range of $341-752 per tonne on 5 February 2016 for a period of six months, the government was in a quandary as safeguard duty and MIP cannot be implemented simultaneously.

Experts believe that the intention of the government is to restrict cheaper imports taking place from China.

“That is why the government has decided to impose the safeguard duty and continue with MIP,” said Anwarul Hoda, professor, Indian Council for Research on International Economic Relations.

MIP enables the government to apply restriction on imports that are cheap, he added.

Others favour a more calibrated approach.

“The WTO (World Trade Organisation) compliant safeguard duties including anti-dumping duty are better tools for protection than setting cumbersome product specific minimum import prices. The extent of duties, however, needs periodic examination and rebalancing in the view that protecting steel industry may have adverse impact on engineering goods exports. The proposed three year term with incremental annual lowering of rates may need to be assessed,” said Dipesh Dipu, partner, Jenissi Management Consultants, a consultancy focusing on energy and resources.

The Bharatiya Janata Party-led government has taken several protective measures against import of cheap steel products. To counter subsidies provided to Chinese stainless steel manufacturers by its government, India is also investigating whether to levy a countervailing duty on the product’s import from China to protect Indian manufacturers, VCCircle reported on 14 March. Also, domestic manufacturers want an anti-dumping duty on steel to make domestic prices at par with imports.