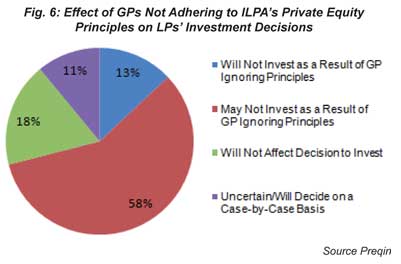 A survey of 50 institutional investors by Preqin, a research house which tracks PE fund-raising globally, reveals that 13% LPs would dismiss an opportunity to invest in a fund based solely on its non-adherence to the Principles, and a further 58% said that they would see this as a potential reason to not invest.

ILPA’s Principles state that “all transaction, monitoring, directory, advisory, and exit fees… should accrue 100% to the benefit of the fund.” There has been considerable movement in recent years towards the GPs rebating to funds the fees they charge portfolio companies.

The Principles call for no-fault divorce rights upon the vote of two-thirds in interest of LPs. However, less than 4% of funds comply with this Principle, and the most common LP supermajority required is 80%, the threshold used by 58% of recent funds. (A "no fault divorce" clause permits investors at a time after the final closing date, to remove the general partner of a fund and either terminate the Partnership or appoint a new general partner.)

Other ILPA Principles are followed more closely; for example, 97% of recent funds reduce their management fee after the investment period through a variety of different methods.

A substantial contribution by GPs to their own funds is another area detailed in ILPA’s Principles. Two-thirds of recent funds have GP contributions above 1%, which is seen as the historical standard, demonstrating that this is another area that has seen movement by GPs.

Preqin’s review of the most recent fund PPMs (a document that discloses everything the investor needs to know to make an informed investment decision) reveals that the vast majority of funds outside of North America do adhere to this Principle, with 88% of European funds with a 2009/2010 vintage and 85% of recent Asia and Rest of World-focused funds also doing so.  However, in North America, only 48% of funds comply to this.

The backlash is being seen more in the mature economies as emerging markets are more encouraging to negotiation and discussion.

"In Europe and Australia, LPs are telling me that there is a fair alignment of interest between themselves and their GPs. Since it is a relatively new environment, documentation and processes are evolving and discussions around negotiations are encouraged,” Kathy Jeramez Larson, Executive Director, ILPA told VCCircle.

Larson added that there is more resistance being seen with established funds. “A lot of LPs and GPs in Asian markets are looking at guidance outside their geographies. But the established funds who are not used to negotiation and dictating practices are finding the maximum trouble, as these firms did not have to disclose information before or perhaps in the last ten years – an area of resistance,” she added.

Supporting the view, Jennifer Choi, Director of Research, EMPEA (Emerging Markets Private Equity Association) told VCCircle, “The general consensus is that alignment of interest problems have been less pronounced in emerging markets than in developed markets. The relevance of the Principles for EMPEA funds may lie more in fund governance and disclosure practices though LPs will doubtless continue to seek more aligned economics”.

These trends are significant as they come at a time when fundraising remains a challenging prospect and add to is the fact that ILPA principles are increasingly gaining traction.

“With 130 organizations already endorsing ILPA’s Principles, it is important for private equity firms to be aware of these ‘best practices’ and to have considered them when assembling PPMs. While some areas of the Principles are being followed, other areas do not enjoy such widespread support. With the majority of investors in Preqin’s recent survey seeing non-adherence to the Principles as a reason to not invest in a fund, it just becomes imperative that managers with non-‘best practice’ terms are able to communicate why this is to an increasingly terms and conditions-sensitive LP community,"  said Seam Meakin, Managing Editor of the 2010 Preqin Fund Terms Advisor in the note.

Larson of ILPA feels that the principles create room for open discussion, provide proper models and structure to justify the management fee math and facilitate sharing of information between GPs and LPs – who in turn need to justify to their investment committee why they are putting money to a particular fund.

The argument only gets stronger as Larson asserted that the big buyout funds can no longer dictate or are the so-called preferred destinations for institutional investors. “LPs need to show that private equity as an asset class is stronger than putting money in other sectors and on average research shows that private equity doesn’t do that. But on average the top quartile does return higher than the public markets. We are finding that the brand name isn’t necessarily generating the highest returns and when you do the math, and incorporate the management fee, attribution analysis etc, there are still names that are coming high on that list and in most cases is turning out to be the GPs making the money and LPs not. So in most cases, it has to turn out to be alignment of interest and financial modeling to understand if that team will generate that high return for them,” Larson added.

The key drivers to the creation of ILPA principles were the deep global recession which broke down the leveraged debt model or insufficient reserves for follow ons and LP liquidity constraints which created tension between LPs and GPs. The lack of liquidity on both sides made the alignment gap more pronounced. In a world where emerging market funds battle for a share of a smaller wallet, demonstrating clear alignment of LP-GP interests is now more crucial than ever before. While the general consensus is that alignment of interest problems have been less pronounced in emerging markets than in developed markets, there are still wide ranging implications.

Choi of EMPEA pointed out that challenges remain for the emerging market managers like those of  the repayment of claw-back  gross of tax, the fixing of fees based only on expenses and the rear-ending of carry to the team.  The issue of net versus gross on tax is important particularly in the case of India because GPs face a  difficult time getting tax refunds from the authorities.

Referring to a recent webcast on ILPA principles shaping the LP-GP relationships in emerging markets, Choi said, while  aligning interests between LPs and GPs is critical, GPs in the emerging markets also feel that with longer-lived funds must also align incentives with the team, an acute challenge in markets where good talent can be lured away by the promise of more attractive near-term compensation.

On the point of having skin in the game, it was suggested during the webcast that the GP’s commitment  should be commensurate with the team members’ personal wealth, rather than a set percentage of the fund.