How telltales told you not to own Wal-Mart, and continue to do so

Wal-Mart market value took a huge drop on Wednesday.  In fact, the worst valuation decline in its history.  That decline continued on Thursday.  Since the beginning of 2015 Wal-Mart has lost 1/3 of its value.  That is an enormous ouch. 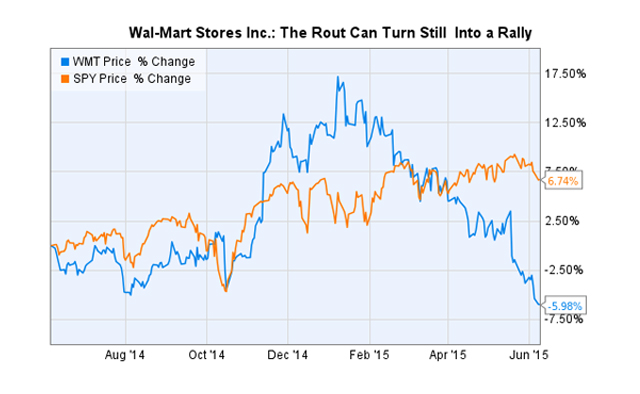 But, if you were surprised, you should not have been.  The telltale signs that this was going to happen have been there for years.  Like most stock market moves, this one just happened really fast.  The “herd behavior” of investors means that most people don’t move until some event happens, and then everyone moves at once carrying out the implications of a sea change in thinking about a company’s future.

All the way back in October, 2010 I wrote about “The Wal-Mart Disease.”  This is the disease of constantly focusing on improving your “core” business, while market shifts around you increasingly make that “core” less relevant, and less valuable.  In the case of Wal-Mart I pointed out that an absolute maniacal focus on retail stores and low-cost operations, in an effort to be the low price retailer, was being made obsolete by on-line retailers who had costs that are a fraction of Wal-Mart’s expensive real estate and armies of employees.

At that time WMT was about $54/share.  I recommended nobody own the stock.

In May, 2011 I reiterated this problem at Wal-Mart in a column that paralleled the retailer with software giant Microsoft, and pointed out that because of financial machinations not all earnings are equal.  I continued to say that this disease would cripple Wal-Mart.  Six months had passed, and the stock was about $55.

By February, 2012 I pointed out that the big reorganization at Wal-Mart was akin to re-arranging deck chairs on a sinking ship and said nobody should own the stock.  It was up, however, trading at $61.

At the end of April, 2012 the Wal-Mart Mexican bribery scandal made the press, and I warned investors that this was a telltale sign of a company scrambling to make its numbers – and pushing the ethical (if not legal) envelope in trying to defend and extend its worn out success formula.  The stock was $59.

Then in July, 2014 a lawsuit was filed after an overworked Wal-Mart truck driver ran into a car killing James McNair and seriously injuring comedian Tracy Morgan.  Again, I pointed out that this was a telltale sign of an organization stretching to try and make money out of a business model that was losing its ability to sustain profits.  Market shifts were making it ever harder to keep up with emerging on-line competitors, and accidents like this were visible cracks in the business model.  But the stock was now $77. Most investors focused on short-term numbers rather than the telltale signs of distress.

In January, 2015 I pointed out that retail sales were actually down 1% for December, 2014.  But Amazon.com had grown considerably.  The telltale indication of a rotting traditional retail brick-and-mortar approach was showing itself clearly.  Wal-Mart was hitting all time highs of around $87, but I reiterated my recommendation that investors escape the stock.

By July, 2015 we learned that the market cap of Amazon now exceeded that of Wal-Mart.  Traditional retail struggles were apparent on several fronts, while on-line growth remained strong.  Bigger was not better in the case of Wal-Mart vs. Amazon, because bigger blinded Wal-Mart to the absolute necessity for changing its business model.  The stock had fallen back to $72.

From October of 2010 through January, 2015 I looked dead wrong on Wal-Mart.  And the folks who commented on my columns here at this journal and on my web site, or emailed me, were profuse in pointing out that my warnings seemed misguided.  Wal-Mart was huge, it was strong and it would dominate was the feedback.

But I kept reiterating the point that long-term investors must look beyond short-term reported sales and earnings.  Those numbers are subject to considerable manipulation by management. Further, short-term operating actions, like shorter hours, lower pay, reduced benefits, layoffs and gouging suppliers can all prop up short-term financials at the expense of recognizing the devaluation of the company’s long-term strategy.

Investors buy and hold.  They hold until they see telltale signs of a company not adjusting to market shifts.  Short-term traders will say you could have bought in 2010, or 2012, and held into 2014, and then jumped out and made a profit.  But, who really can do that with forethought?  Market timing is a fools game.  The herd will always stay too long, then run out too late.  Timers get trampled in the stampede more often than book gains.

In this week’s announcement Wal-Mart executives provided more telltale signs of their problems, and the fact that they don’t know how to fix them, and therefore won’t.

Wal-Mart is going to spend $20B to buy back stock in order to prop up the price.  This is the most obvious sign of a company that doesn’t know how to keep up its valuation by growing profits.

Wal-Mart will spend $11B on sprucing up and opening stores.  Really.  The demand for retail space has been declining at 4-6%/year for a decade, and retail business growth is all on-line, yet Wal-Mart is still massively investing in its old “core” business.

Wal-Mart will spend $1.1B on e-commerce.  That is the proverbial “drop in the competitors bucket.” Amazon.com alone spent $8.9B in 2014 growing its on-line business.

Wal-Mart admits profits will decline in the next year.  It is planning for a growth stall.  Yet, we know that statistically only 7% of companies that have a growth stall ever go on to maintain a consistent growth rate of a mere 2%.  In other words, Wal-Mart is projecting the classic “hockey stick” forecast.  And investors are to believe it?

The telltale signs of an obsolete business model have been present at Wal-Mart for years, and continue.

In 2003 Sears Holdings was  $25/share.  In 2004 Sears bought K-Mart, and the stock was $40. I said don’t go near it, as all the signs were bad and the merger was ill-conceived.  Despite revenue declines, consistent losses, a revolving door at the executive offices and no sign of any plan to transform the battered, outdated retail giant against growing on-line competition investors believed in CEO Ed Lampert and bid the stock up to $77 in early 2011. (I consistently pointed out the telltale signs of trouble and recommended selling the stock.)

By the end of 2012 it was clear Sears was irrelevant to holiday shoppers, and the stock was trading again at $40.  Now, SHLD is $25 – where it was 12 years ago when Mr. Lampert started his machinations.  Again, only a market timer could have made money in this company.  For long-term investors, the signs were all there that this was not a place to put your money if you want to have capital growth for retirement.

There will be plenty who will call Wal-Mart a “value” stock and recommend investors “buy on weakness.”  But Wal-Mart is no value.  It is becoming obsolete, irrelevant – increasingly looking like Sears.  The likelihood of Wal-Mart falling to $20 (where it was at the beginning of 1998 before it made an 18 month run to $50 more than doubling its value) is far higher than ever trading anywhere near its 2015 highs.