India’s volatile food prices are yet again posing a sticky inflation problem for its central bank, preventing it from cutting rates as deep as it would like to support a stuttering economy.

After slashing rates five times this year, the Reserve Bank of India (RBI) stunned markets earlier this month by resisting a sixth reduction as many had predicted.

Accelerating inflation is a concern, the RBI said after its decision, while signalling it had room to ease policy further to lift an economy growing at its weakest pace in six years.

Earlier this week RBI Governor Shaktikanta Das reiterated the central bank’s readiness to ease if needed. Yet traders expect price pressures will be a hurdle to pushing down the key repo rate much below the current 5.15% over coming months.

Food inflation in November rose to an almost six-year high and is seen staying around those levels over the next few months. 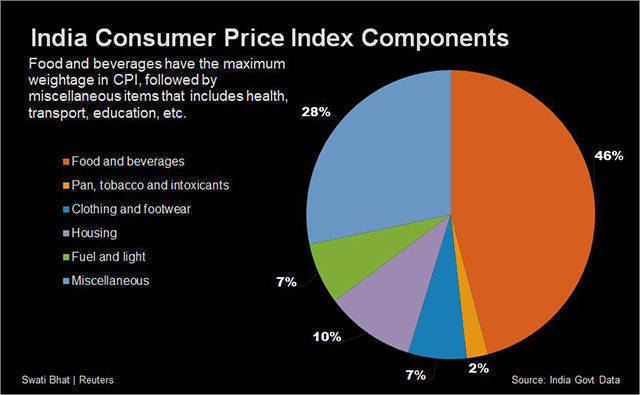 “Prices of grains such as wheat could start moderating from April onward, but prices of milk, meat and edible oils may remain firm,” said Harish Galipelli, head of commodities and currencies at Inditrade Derivatives & Commodities in Mumbai.

Dairies have raised milk prices by around 5% this month due to a drop in supplies. Egg and chicken prices too are seen remaining elevated as production costs have jumped due to rising animal feed prices, said a poultry producer.

A normal monsoon year would have helped cool food inflation, but this year the highest rainfall in 2-1/2 decades followed by untimely rains have damaged the summer-sown crops and delayed planting of winter crops.

Food inflation has long been volatile in India, a country where farming is still carried out by small households, making supply uneven and unpredictable. 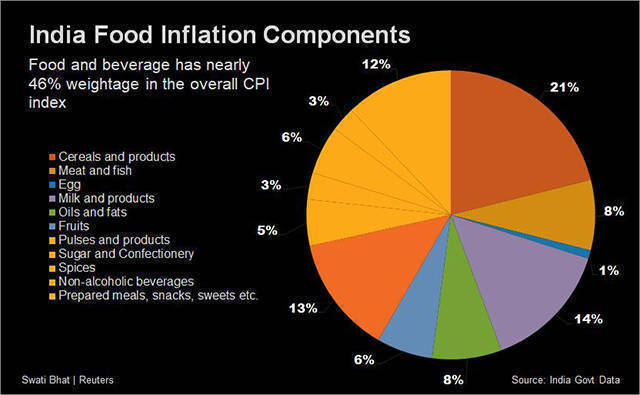 Pulses prices are rising as production of summer-sown pulses such as black gram and pigeon peas was curtailed by untimely rainfall, said Nitin Kalantri, a pulses miller based at Latur in Maharashtra.

In some commodities such as edible oils, overseas price spikes have been lifting costs in India, said B.V. Mehta, executive director of the Solvent Extractors’ Association of India (SEA).

India fulfils nearly two-third of edible oil requirement from imports. Prices of palm oil, which accounts for two-third of India’s edible oil imports, have jumped 35% in just over two-months to their highest level in nearly three years.

Sugar prices are also likely to remain firm in 2020 as the country’s production is expected to fall 20% year-on-year to three-year lows, traders said.

The debt market has ruled out a February rate cut but the overnight swaps market is now pricing in a cut in the month of April.

“The RBI targets retail inflation, which has jumped 240 bps in the last four months and is now close to the upper end of the RBI’s target zone,” said Sujan Hajra, economist at Anand Rathi Securities.

That means “the RBI is unlikely to cut its policy rate soon,” he said.