How do macroeconomic factors affect investments by limited partners?

India is one of the fastest growing economies in the world. Economic growth is one of the macroeconomic factors which make investing in venture capital (VC) and private equity (PE) funds attractive. But by itself, economic growth is not enough to make investing in India attractive to limited partners (LPs) who invest through PE and VC funds. LPs tend to invest in PE and VC funds expecting high returns through their investments in growing startups, or from exits through mergers and acquisitions (M&As) and initial public offerings (IPOs).

There are factors other than economic growth which influence LP investments. Macroeconomic stability in India has been low for many decades. High inflation, rapid currency depreciation and high capital outflows have been the norm. So, there is a trade-off between risks and returns.

Monetary and fiscal policies, inflation, and economic booms and busts affect LP investments greatly, mostly when investments are long term. LPs tend to invest in VC and PE funds under all macroeconomic conditions, to mitigate risk. Economic cycles are not likely to have much of an impact on the portfolio of LPs if they spread their investments over a longer time-frame.

India has had a high rate of inflation for the past 70 years. Except from 1999 to 2006 February, when the then RBI governor C Rangarajan was serious about tackling inflation, India never had a period of price stability. Inflation fell to low levels under Raghuram Rajan too, though we are yet to see sustained price stability over a long period. Even in best times, India’s inflation levels were much higher than in western capitalistic democracies which have enjoyed historically low levels of inflation for nearly three decades. Startups and early stage firms are less likely to be funded when inflation is high.

The reason is fairly obvious. Inflation has a negative impact on all forms of investments. Investors tend to get lower returns from their investments and LPs and VC and PE funds are not exceptions to this rule. Studies in mature economies indicate that a 0.5% rise in inflation leads to a 7.57% decline in venture capital investment growth. With low returns from investments, LPs and VCs are reluctant to invest, especially in startups and early stage firms.

Funds are less likely to invest in long-term ventures when inflation is rising, if returns are realised years from now. This is not necessarily true of late stage firms because VCs can rush these firms to IPOs before inflation rises even further. If the RBI cuts interest rates, for example, venture capital investment may still rise because traditional methods of financing like bank loans tend to be expensive for startups. 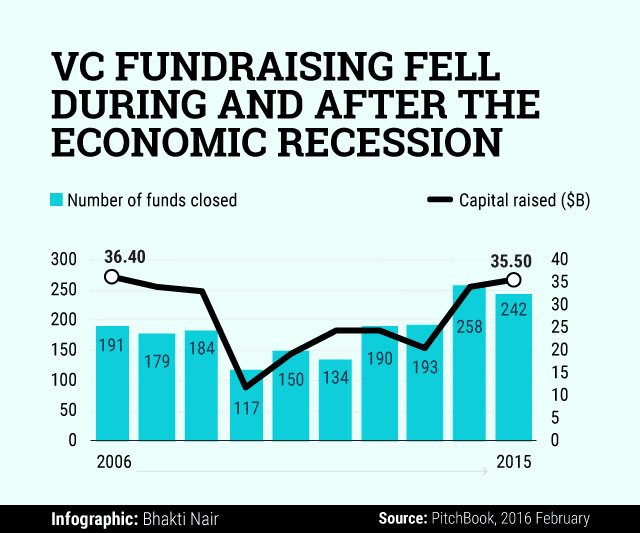 Even though LPs invest in funds regardless of macroeconomic conditions, they are less likely to invest during a recession. They invest less during a bust and invest more during a boom. On the surface, this doesn’t make much sense. Why would LPs invest more when the valuation of startups is likely to be higher? Many LPs are institutional investors. They are usually not free to allocate more than a certain fraction of their funds to PE and VC funds. When stock prices fall during a bust, public valuations of companies fall more. The fall is not so steep in VC valuations. LPs suddenly have more VC investments than usual.  So, they cut back on VC investments. But this is not the only reason. Many LPs panic during a bust and invest less in VC and PE firms.

From 1973 to 2017, the value of the US dollar in terms of Indian rupee has risen as high as 68.81 and fallen as low as 7.19. As currency depreciation in India is high, currency risk has an impact on the performance of LPs and PE and VC firms. This is true of general partners (GPs) too, because currency risk leads to a skewed assessment of their track record. When currency devaluation happens, GPs are deprived of performance fee. So, even when their investment does well, GPs find it hard to motivate their team members. This kills incentives to perform, leading to high attrition rates. LPs and GPs can mitigate the risk by spreading their investments over a long period of time. So, in the long run, currency risk tends to be minimal. But on a single deal, currency risk can have a huge impact. When LPs invest in India in the beginning of a currency depreciation cycle, their performance in US dollars is likely to decline. The reverse happens when they invest in India at the beginning of a currency appreciation cycle.

To sum it up, macroeconomic policies have a high impact on the performance of LPs and PE and VC firms. The biggest challenge before Indian policymakers is to stimulate growth while maintaining macroeconomic stability. This helps the LPs as well.