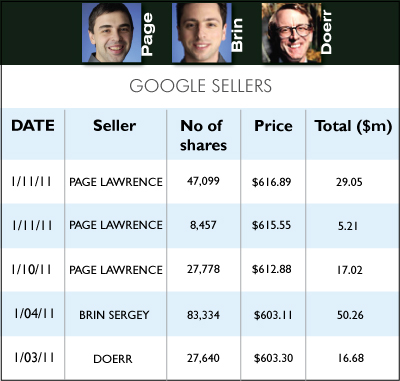 Key Google executives have sold more than a billion dollars worth of shares in 2011. And it has been only twenty days since the new year has begun. The Google guys are half a billion dollars richer. Each. They are also planning to get wealthier.

According to filings with the SEC, Larry Page and Sergey Brin sold off shares worth $51.28 million, and $50.26 million respectively in the first two weeks of January. Others like John Doerr of Kleiner Perkins Caufield & Byers, a Google board member  since May 1999, also followed suit. However, his cash-in was a measly $16.68 million. Insider filings have to be filed periodically with the SEC.

Schmidt selling 0.2% of his stake in Google

Eric Schmidt (and he is not the only one) intends to sell approximately 534,000 shares of Class A common stock in Google, according to a Form 8-K  Google filed with the SEC in Washington D.C. Form 8-K includes results of operational and financial results, among other things, pursuant to Section 13 or 15(d) of The Securities Exchange Act of 1934.

Schmidt’s move has probably not got much to do with the fact that he is stepping down as CEO of the company; the CEO and current chairman will continue to be executive chairman. By all indications, for a very very long time, maybe even the next decade or so. Besides, Schmidt still owns a chunk of Google, and has considerable sway at voting events. While the amount of shares may be high in number, with a big ticket payout at the end, it is a small percentage of what Schmidt currently holds, and will continue to.

It is difficult to put a dollar value to the money Schmidt will be getting over the year in the process. Just to get a perspective, in today’s dollars the shares are worth $ 334,695,180 in paper (GOOG is at $626.77, on January 20, 2011) or about $335 million. The 534,000 shares cannot be sold at one go, but at intervals over a period of one year, to reduce market impact. Google stock prices tend to vary; and though it may fall over the next couple of days as the market reacts to the new CEO, overall the price can be expected to trend upwards. After all, while it is true that there has been a management reshuffle, it is also that the top three in Google continue to be the top three in Google, and in between the three of them seems they will continue to do what the three of them have been doing over the last ten years or so.

Adoption of Rule 10b5-1 Trading Plan

On December 9, 2010, Schmidt adopted a stock trading plan in accordance with guidelines specified under Rule 10b5-1 of the Exchange Act, and Google’s Policy Against Insider Trading.

This pre-arranged plan was adopted in order to allow Schmidt to sell a portion of his Google stock as ‘part of his long-term strategy for individual asset diversification and liquidity’, as mentioned in the SEC filing. All transactions under this plan will need to be disclosed publicly through Form 4 and Form 144 filings with the SEC. Since Schmidt has already informed the SEC of his intention to sell stocks, he can not be accused of insider trading in the future. Schmidt is not the only one who would be selling off a portion of his Google stocks. Larry Page and Sergey Brin will follow suit too.

According to a filing with the SEC, On November 30, 2009, Larry Page and Sergey Brin each adopted stock trading plans in accordance with guidelines specified under Rule 10b5-1 of the Securities and Exchange Act of 1934 and Google’s policies regarding stock transactions. In the future, they too will begin selling a portion of their Google stock pursuant to these stock trading plans.

Google guys are not the only one

Yahoo CEO Carol Bartz sold more than $1 million in shares about a year and a half ago, incidentally after being only six months in the job. Apple executives sold over a million shares of Apple stock last year. Tim Cook, the Apple COO sold 300,000 shares. Larry Ellison, Oracle’s prophetic CEO, disposed of eight million  Oracle shares in September last year for $217 million. Ellison also sold through a prearranged selling plan, adopted earlier during the year.

The challenge is, how comfortable will you be investing your money in a company whose CEO would think it necessary to invest in something else to diversify and hedge his portfolio?