There is no asset on a company’s balance sheet that wreaks more havoc on valuation and good sense than goodwill. The first problem with goodwill is that it sounds good, and when something sounds good, people feel the urge to pay for it. The second problem is that, notwithstanding claims to the contrary, it is not an asset but a plug variable that measures everything and nothing at the same time.

A short history of acquisition accounting

To understand the treatment of goodwill in GAAP, it is worth taking a quick look at how acquisitions have been accounted for over time, at least in the United States. Until a decade ago, companies that acquired other companies could pick one of two approaches to “account” for the acquisition.

In spite of the fact that goodwill was a purely accounting variable and that its “non tax deductibility” made it irrelevant for cash flows, the fear of the earnings hit from amortization led companies to go through contortions (and to pay more) to qualify for pooling. AT&T, for instance, paid an additional $325 million when it bought NCR, to qualify for pooling, making an awful deal even worse. The prevalence of two different acquisition accounting systems also made it difficult to compare the balance sheet numbers for acquisitive companies that used purchase as opposed to pooling. Finally, amortizing goodwill over 40 years for all acquirers essentially resulted in both good and bad acquisitions being treated the same way for accounting purposes.

To remedy these problems, the accounting rules were changed on June 30, 2001, with four key modifications. First, pooling was disallowed and all firms were required to use purchase accounting. Second, accounting rules were changed to give accountants more discretion, albeit within strict limits, to do a reassessment of the value of a target firm’s existing assets at the time of the acquisition. To the extent that a target firm had assets on its books that were recorded at below (or above) their “fair” value today, this accounting adjustment could lead to an adjusted book value (which is different from the actual book value). In addition, accountants were also allowed some leeway to bring in the values of “intangible assets” such as customer lists and technology patents into the book value of the target firm. Third, the goodwill was then computed to be the difference between the market value paid for the target company and the “adjusted” book value. Finally, rather than amortize this goodwill over 40 years, accountants were required to revalue the acquired company at regular intervals and impair the goodwill, if they felt that the target company had declined in value.

While these changes made sense at an intuitive level, there are two things worth emphasizing about them. First, for better or worse, it has been a lucrative jobs program for accountants & appraisers, since their services are now required both at the time of the acquisition (to reappraise the value of the existing assets) and each period thereafter (to assess target company values). Second, as is the case with most accounting rules, the rules have obscured the principles of what the changes were meant to accomplish: create more transparency for investors about acquisition costs and more accountability for bad acquisitions.

So, what does goodwill measure?

If goodwill is the difference between what an acquiring company pays and the “adjusted” value of its existing assets, what exactly goes into it? To answer that question, let me compare two visions of balance sheets: 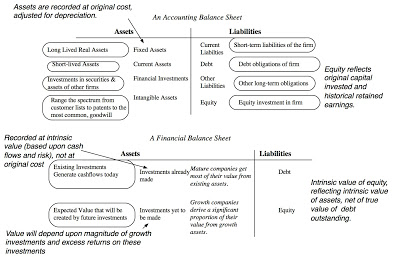 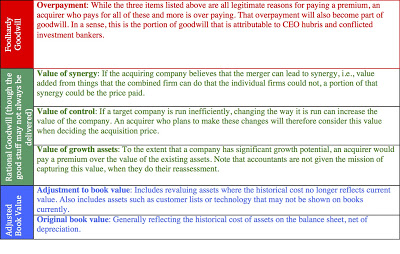 Thus, accounting goodwill is composed of both goodwill that has a rational basis (a fair value of growth assets, control, synergy) and goodwill that is built on sand. Why should you care? As a stockholder in the acquiring firm, you first want to separate out overpayment from the remaining reasons, since it is an immediate transfer of your wealth to the target company. You could, of course, wait for accountants to impair this portion of the goodwill but it not only happens too late to help investors, but it may also reflect unexpected disappointments on control, synergy and growth assets.

I have a simple proposal that I know has zero chance of being adopted that may give investors at least a heads up, with acquiring companies. At the time of the acquisition, I noted in an earlier post that the acquiring company’s stock price drops in about 55% of acquisitions. If you accept the argument that this is the market’s collective judgment of how much was overpaid, why not break goodwill down into two components: the “market correction” can be called foolhardy goodwill and the rest can be rational goodwill. Thus, if a company pays $12 billion for a company with an adjusted book value of $ 4 billion, and sees its market cap drop by $ 3 billion on the announcement, you should see $ 3 billion in foolhardy goodwill and $ 5 billion in rational goodwill on its balance sheet. While both types of goodwill may turn out to be wrong, in hindsight, and may need to be impaired, I would argue that firms (their top managers and bankers) should be held much more accountable for failures on the former, because they chose to do the acquisition in the face of investor opposition.

The Goodwill Games: The Bottom Line

In summary, then, the new rules on goodwill have not reduced the propensity of acquirers to overpay for target firms, have not made their financial statements more informative, and might have made it more difficult for investors to value serial acquirers. So, would it not make more sense to move back to a simpler, automated system for reporting on acquisitions, with less accounting judgment and more reporting of facts?