GDP growth in FY14: Set for a cyclical upturn
Advertisement

GDP growth in FY14: Set for a cyclical upturn

Over the last two years during our monthly visits to Delhi we have tried in vain to understand the UPA’s and, more interestingly, the Congress’ political and economic strategy. By and large, our success in this endeavor has been largely restricted to being able to decipher reform announcements which are likely to arrive in the coming weeks; none of our trusted sources seemed to understand what the UPA’s longer term political and economic strategy was.

‘The UPA in no way is a minority Govt’

In our email dated 19th September, 2012, we made the point that the TMC’s (19 Lok Sabha seats) pullout from the UPA Government is likely to be irrelevant for the stock market.

Our sources in Delhi say that TMC’s shenanigans are inconsequential from a political stability point of view mainly because both the SP (22 Lok Sabha seats) and BSP (21 Lok Sabha seats) have explicitly expressed their support to the UPA in the form of letters to the President last week. Therefore, the current Government has a clear simple majority in the Lok Sabha with 300 seats (i.e. 276 (Congress ex- TMC) – 19 (TMC) + 22 (SP) + 21 (BSP) =300).

Several of our sources in Delhi are of the view that a second wave of policyfireworks is likely to be announced in the coming weeks as the FM sees October 2012 as ‘the one month window of opportunity’ for administering reforms. Whilst experts were uniformly of the view that ‘the parliamentary road to reforms is over’, our sources highlight the three key sets of out-of-parliament reform that the Government is likely to deliver by October 2012:

Dr. Govinda Rao is the country’s leading fiscal expert and is also an independent Board member of REC and NTPC. In a conference call with our clients of 21st Sept, Dr.Rao highlighted that the State Electricity Board (SEB) debt restructuring scheme has been finalised and would be put before the cabinet on 25th September.

According to our panel of Power experts, tariff revisions for IPPs’ can be justified despite no “fuel pass through” clauses embedded in the PPA documents as:

(a) The sector is at an evolution stage (only since 2003 private sector started participating aggressively) and hence it is highly possible that these power purchase contracts entered into three to four years back were not fully able to envision the risks on multiple fronts (availability of coal, SEBs financial health). Note that globally no developer exposes itself to fuel costs for a period of 25 years and hence the competitive bidding happens on fixed cost and plant efficiency which is completely different from what happens in India (wherein developers also locks the fuel purchase cost for a period of 25 years); and

(b) As in the transportation infrastructure (Noida Toll bridge and airports) and in the Telecom sector (linking license fee to revenue), the Government has a history of changing the clauses of revenues post the partial/full completion of these projects so as to make these projects ROE positive.

One of the methodologies to determine the quantum of tariff hikes highlighted by our expert is project rebidding, wherein it’s a take or pay arrangement for the existing project developer. In other words either the existing developer matches the lowest bid or surrenders the project at book value to the lowest bidder. The rationale of rebidding is to determine the new tariff in a fair and transparent manner.

Vijay Kelkar, the Chairman of the Thirteenth Finance Commission, is in the process of advising the Ministry of Finance on possible capital market reforms. This package of capital market reforms are likely to aid: (1) The FII community by reducing compliance costs, (2) Domestic mutual funds and (3) SMEs as well as unlisted companies by facilitating access to affordable capital.

The Congress plans to cement its coalition

Political-economy experts are of the view that the key reason why the UPA remains stable despite TMCs (19 Lok Sabha seats) support withdrawal is simply because there exist three substitutes to this party namely the SP (22 seats), the BSP (21 seats) and the JD(U) (20 seats). Besides a Cabinet reshuffle that interests these parties, each of these 3 parties stands to gain financially by the possible grant of a ‘special status’ to UP and Bihar. In addition, our sources say that ‘special status’ is

also being discussed for Orissa (where the Chief Minister’s party, BJD (14 seats in the Lok Sabha) is currently a member of the Opposition). It is worth noting that 11 Indian states (namely Arunachal Pradesh, Assam, Himachal Pradesh, Jammu and Kashmir, Manipur, Meghalaya, Mizoram, Nagaland, Sikkim, Tripura & Uttarakhand) currently enjoy special status which makes them eligible for extra financial support from the Central Government.

Whilst the Kelkar Committee report is likely to add to the Government’s stated goal of fiscal consolidation (through improved tax administration, restricting subsidies and cutting-back on unproductive expenditures), our fiscal expert, Dr.Rao, expects the Central Government’s fiscal deficit to remain an area of weakness in FY13.

Dr.Rao expects the Central Government fiscal deficit to be in the range of 5.5-6% of GDP in FY13 (v/s the budgeted 5.1% of GDP) owing to: (1) Gross tax revenue growth being recorded at ~15% YoY v/s the 20% YoY budgeted growth; and (2) A high petroleum subsidy bill (of ~INR800bn as per our estimates) v/s the INR440bn that has been budgeted. Whilst Dr.Rao expects the disinvestment target of INR300bn to be achievable owing to the improved capital market conditions, the Government is expected to cut-back on capital expenditure to restrict the quantum of fiscal slippage.

GDP growth in FY14: Set for a cyclical upturn

As highlighted in our earlier research, investment growth and hence GDP growth in India is tightly linked to domestic equity capital availability owing to India’s

capital scarce nature. We expect the economic reforms announced in September 2012 and the series of reforms that the Centre is likely to announce in October (see preceding section) to improve equity capital availability in India thereby facilitating a cyclical recovery – similar to the cyclical pick-up in GDP growth from

Whilst we expect GDP growth in India in FY13 to be recorded at 6.3% YoY, GDP growth in FY14 is likely to record a cyclical upturn at 7.1% YoY assuming: (1) Normal monsoons, (2) A marginally lower crisis factor than prevailing in FY13, and (3) A jump in Central Government revenue expenditure in a pre-election financial year.

10 year average of 10.7% YoY) which in turn will propel higher industrial sector growth.

above for estimates and Exhibit 2 below for assumptions made). 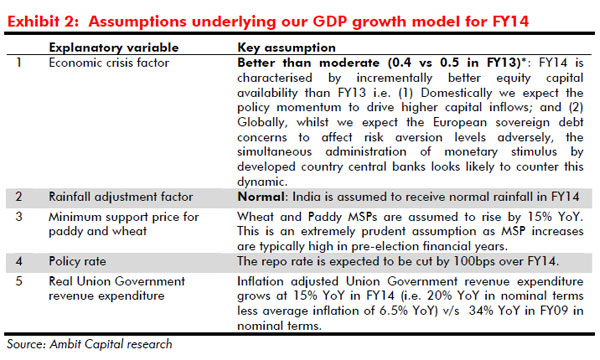