Gross domestic savings growth has been moderating, driven by a fall in the financial savings to GDP ratio. Contrary to conventional wisdom, the move away from financial assets is more driven by the unfavourable regulatory environment than households flocking to buy gold. The widening of the S-I gap implies that India’s investment cycle is becoming more vulnerable to global risk appetite, and our analysis suggests that efforts to curb gold imports won’t be enough to trigger

a return to financial assets. The government should focus on reforms that support areas such as mutual funds and insurance. A high, rising and productive savings rate was one of the key attractions of India through 2003-2008, so a moderation of this trend is important and merits attention.

Households move away from financial assets

The falling savings rate now seems to be a growing source of worry for the Indian economy. While the saving rate continued to be at 30% plus in FY11 (the last officially available data point), it has been moderating. While part of the moderation is driven by economic slowdown, the worrisome part is the changing composition of savings against the more ‘productive’ (which we define to be the sum of household financial savings and private corporate savings)

component of savings, led by a slowdown in household financial savings. So where have the households been investing?

Indian households’ preference is increasingly to save through cash or currency. The share of ‘currency’ in total household financial assets has gone up from 6%

in FY01 to 9% in FY06 and further to 13% in FY11, and given sustained high inflation and low to negative real interest rates in FY12, the trend is likely to have

GDP accounts for only 12% of the drop in household financial savings.

How far can gold be blamed?

What is of utmost importance here is that gross savings/GDP has corrected even after accounting for gold (which does not form a part of savings), implying that gold is not to be entirely blamed for the lowering of savings rates. Contrary to conventional wisdom, India’s consumption of gold and its gold import volume saw a correction i n 2011, though the value of imports was still high because of the spiralling prices.

2) Newer regulations and curbs on gold imports in themselves may not trigger a return to financial assets. Falling savings is a wider problem and unless the bigger challenges on the regulatory, economic and financial front are addressed, households may continue to increase savings in physical assets and cash holdings.

4) A high current account deficit, combined with low capital inflows, may result in the continued need for intervention (sale of USD) by the RBI, with a negative impact on banking system liquidity and credit growth.

The fast rising savings rate of the Indian economy was seen to be one of the key drivers of India’s growth from 2003-08. Gross domestic savings increased continuously from an average of around 10.0% of GDP during the 1950s to a peak of 36.8% in FY08, led by an increase in household financial savings from 1.9% to 11.6% in the corresponding periods. Even in an international perspective, India has had a relatively high savings rate as compared with many other countries.

Savings, now, seem to be are a growing source of worry for the Indian economy. While the savings rate continued to be at 30% plus in FY11 (the last officially available data point), it has been moderating. While part of the moderation is driven by economic slowdown, the worrisome part is the changing composition of savings

against the more ‘productive’ (which we define to be the sum of household financial savings and private corporate savings) component of savings, led by a slowdown in 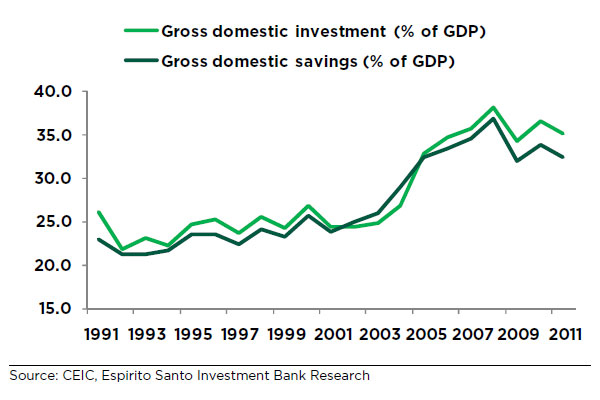 Household savings, which account for about 70% of gross domestic savings, share the blame along with public authority savings which remain negative. The latter has also been reflected in the growing fiscal deficit (5.9% of GDP in FY12) and government market borrowings (5.7% of GDP in FY12), the implications of which we have

discussed several times since the budget in March-12, so let’s focus here on household savings and what’s going wrong with it.

The direct implication of the falling savings rate has been on the investment-savings (I-S) gap, which widened to a two-decade high of 2.8% in FY10 and remained at 2.7% in FY11. Even when the real investment cycle has been trending downwards since 2009, the I-S gap has widened because of a bigger moderation in savings, especially household savings. The gross domestic savings rate for the economy has failed to recover since 2009 when it slipped by 4.8% of GDP from a peak of 36.8% in 2008. 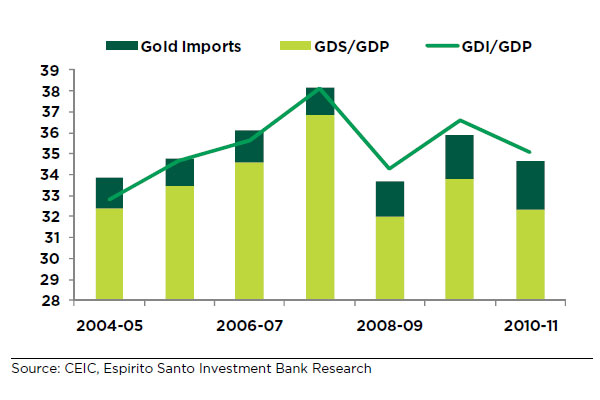 One reason for the sharp fall in household savings by 2.6% of GDP in FY11 to 22.8% has been the decline in household financial assets by 2.9% of GDP. This may be on

The key determinants of private savings in India are real interest rates, inflation, level and rate of growth of disposable income, investment opportunities and depth of financial markets including the impact of regulation. Growth in disposable income has been steady, with FY10 and FY11 recording an average of 13% YoY growth. Then

assuming that the marginal propensity to consume remained constant, savings by households should have grown in the vicinity of 13% YoY for higher disposable

income to be translated to higher income. When one looks at the pattern of growth of household financial savings, certain major sub-components have shown increases

much lower than 13%. Household savings in bank deposits managed to grow by a mere 5.4% YoY on average in FY10 and FY11. Provident and pension fund savings

contracted by 17% in FY11, the biggest yearly contraction so far.

The increasingly evident trends are:

1) The most important component of household savings has been bank deposits.After a significant pick up in household deposit growth up to FY07, the rate of

growth has fallen significantly since then (averaging a mere 2.2% YoY during FY08-FY11). The share of bank deposits of total savings dropped from 57% in FY09 to 44%

in FY11. We think the key reason for this was the sharp drop in real interest rates in FY09, dipping and staying in negative territory till the end of 2011.

2) Other components of household savings, that have corrected significantly, have more to do with regulatory changes and lack of incentives to invest in the respective

national deposit scheme, compulsory deposits and other such schemes brought out by the Government from time to time, which also registered a sharp drop in share of

This indicates to us that in recent years households have been moving away from long-term financial assets and also deposit and capital market based instruments. The

avenues most impacted by the harsh regulatory environment are:

2) Mutual funds suffer net outflows due to lack of distribution: Given the change in regulation for the mutual fund industry with abolition of entry loads, the

industry has suffered net outflows since Jul’10 as distributors lost their motivation to sell mutual fund products. Since then the companies have tried to come out with various strategies to overcome the distribution hurdle, but everything has failed. In the absence of regulatory reform we don’t expect this mode of financial savings to contribute materially in the near term. As is visible from the chart below, the DII net flows in the Indian stock markets have been

negative for most of the time since then, leaving the stock market movement at the whims and fancies of the FIIS.

The gap between domestic savings and investment may continue to widen going forward if the fall in financial savings is not arrested. Hence, the investment cycle in

India is unlikely to be immune to what’s happening across the globe. Moreover, newer regulations and curbs on gold imports in themselves may not trigger a return to

financial assets. Falling savings is a wider problem and unless the bigger challenges on the regulatory, economic and financial front are addressed, households may

continue to increase savings of physical assets and cash holdings.

(Deepali Bhargava is Chief Economist and Santosh Singh is analyst with Espirito Santo Securities, a Mumbai based broking firm.)