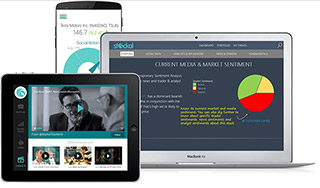 The Stockal app was formally launched at the Las Vegas Traders Expo early this week. The app is still in private beta mode.

“I invested in Stockal due to a combination of events; I like the management team, the fin-tech sector and the market Stockal is targeting. I think there is a tremendous opportunity and Stockal has a very scalable model,” Alexander, who led the round, said.

Founded early this year by Srivastava and Vinay Bharathwaj, Stockal Software Pvt Ltd is a data crunching app that constantly monitors social chatter on publicly traded companies across platforms such as Twitter, StockTwits, Seeking Alpha and Facebook. The app sifts through social media conversations, analyst reports, news clippings, blogs and discussion forums to provide investment signals for stocks listed in the US. It would also feature community analysis of stocks through near-time analyst videos.

Owing to regulatory restrictions, the company, which caters to Wall Street investors from India, doesn't offer its services for domestic equity markets. “SEBI does not allow social media analysis for stocks,” Srivastava had said in a previous interaction, referring to the capital markets regulator Securities and Exchange Board of India. In fact, the company is planning to incorporate a legal entity in the US so it can stay close to customers.

Seeking Alpha, Stocktrade and other platforms, from which Stockal curates content, are also its potential competitors. Then there are players such as Dataminr UK Ltd, Social Market Analytics Inc and other US-based ventures that render similar services to enterprises such as hedge funds.

Stockal expects to clock 100,000 downloads (largely through its iOS app) in the next 12 months.

Prior to co-founding Stockal, Srivastava was the co-founder and CEO of Jade Magnet Online Pvt Ltd, a managed crowd-sourcing platform for creating and marketing support services. Bharathwaj used to run a $300 million hedge fund with a focus on carbon credits.