Costolo should not have been fired – Twitter investors worry

Dick Costolo was let go from his role as CEO of Twitter, to be replaced by a former CEO that was also fired.  Unfortunately, it looks very strongly as if the Board made this decision for the wrong reasons.

Even though investors have been unhappy with Twitter’s share price, as CEO Mr. Costolo was doing a decent job of growing the company and improving profits.  And even though analysts keep offering reasons why he was fired, it looks mostly as if this was a political decision in a company with a “soap opera” executive culture.  Investors should be worried.

Let’s compare Mr. Costolo to CEO Zuckerberg’s performance at Facebook, and Mr. Bezos’ performance at Amazon.  The latter two have been widely heralded for their leadership, so it sets a pretty good bar.

None of these three companies have enough earnings to matter. If you aren’t a growth investor, and you always value a company on earnings, then none of these is your cup of tea. All are evaluated on revenue and user metrics. 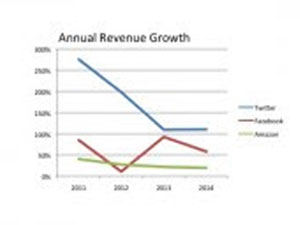 As you can see, Twitter’s revenue growth exceeds its comparators.  Yes, its decline has been more dramatic, but we are comparing Twitter to companies that are much older and bigger.  The net is to understand that revenues are growing, and at a better clip than Facebook and Amazon. 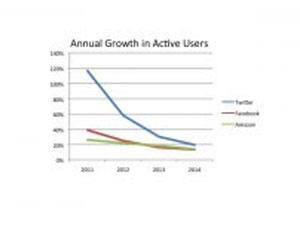 Next we should look at active monthly users.  Again, these numbers are growing at all 3.  And some analysts have said it is the deceleration in the rate of new user growth that doomed Mr. Costolo. But this defies logic given that during his tenure Twitter has dramatically outperformed its competition.

Lastly, let’s look at the “quality” of users.  We can measure this by calculating the revenue per user.  If this goes up, then the company is growing it top line by gaining more revenue per user – it is not “discounting” its way to higher volume.  Instead,we can expect profits to improve based upon growth in this metric. 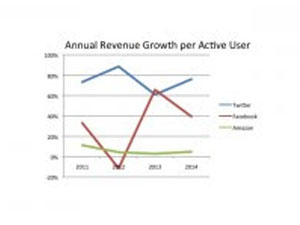 And here we can see that Twitter has wildly outperformed Facebook and Amazon.  Twitter has grown its revenue per user by over 9-fold in the last 4 years, an excellent 75% per year compounded. Facebook, by comparison, roughly tripled its revenue/user (still very good) creating a 25%/year growth (certainly not to be sneezed at.)  Amazon’s growth per user across the full 4 years was 25% – or about 4%/year.

It isn’t hard to see that Mr. Costolo has been doing a pretty good job leading Twitter.

But Twitter has had a very checkered past when it comes to leaders.  Several articles have been written about the revolving door on the CEO office, with founders back-stabbing each other as money is raised and efforts are made to improve company performance technologically and financially.

The Board has shown a proclivity to spend too much time listening to rumors, and previous CEOs.  Rather than focusing on exactly how many users are coming aboard, and how much revenue is generated on those users.

The returning CEO was  himself previously replaced.  And during his tenure there were many technical problems.  Why he would be inserted, and the best performing CEO in company history shunted aside is completely unclear.  But for investors, employees, users (of which I am one) and customers this change in leadership looks to be poorly conceived, and quite concerning.  Mr. Costolo was doing a pretty good job.