Capital Float and Lendingkart Finance, two of India’s most-funded digital lending platforms for small and medium enterprises, recorded a rapid rise in revenue for the year through March 2017 but also fell deeper into the red.

While Capital Float posted higher revenue than Lendingkart, it also burnt more cash and incurred a wider loss than its peer, according to a comparison of their annual financial statements filed to the Ministry of Corporate Affairs.

The comparison takes into account the numbers clocked only by Zen Lefin Pvt. Ltd and Lendingkart Finance Ltd, the non-banking financial arms of Capital Float and Lendingkart Group, respectively. This is because the NBFCs run their core lending business, although both companies also have technology arms. Neither company responded to requests for comment on their financial performance. 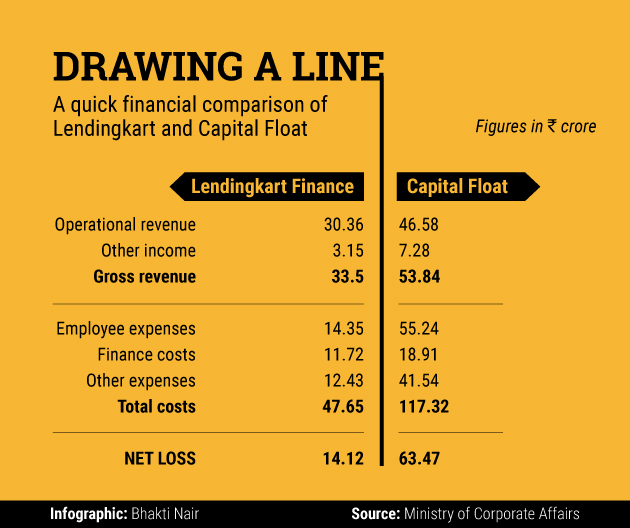 Both companies have similar business models and both are expanding after raising millions of dollars from investors.

According to VCCEdge, the data research platform of VCCircle, Capital Float has raised $86 million in equity funding till date. This includes the $45 million it secured in August from investors including venture capital firms Ribbit Capital, SAIF Partners and Sequoia Capital India.

Separately, Lendingkart Finance raised $15.9 million in October through equity and debt from IFMR Capital and other investors, and another $9.2 million from Lendingkart Technologies.

Interest from loans and processing fees account for the major source of operational revenue for both these companies.

Gross revenue includes income from other sources such as interest from fixed deposits. Capital Float’s other income rose 53% to Rs 7.28 crore while Lendingkart recorded a 9.4% rise to Rs 3.15 crore.

Finance costs—which include term loans from other than banks, loan processing fees and borrowing costs—rose, too. To be sure, this is not unusual given that their business involves borrowing from NBFCs as well as banks for underwriting the loans.

Other major expenses for Lendingkart include commission and brokerage at Rs 4.13 crore, licence fee at Rs 2.81 crore, provisions for non-performing assets at Rs 3.04 crore and loan write-offs at Rs 5.22 crore.