Can you ’burn’ your way to startup success?

Can you “burn” your way to startup success?

That is increasingly the question that isn’t being asked in India, as a flood of venture capital and private equity pours into ever quicker rounds of fund raising at digital startups.

So, is frugality a virtue appreciated anymore?

"That’s a great question. Frankly, we get mixed signals from investors," adds Maheshwari.

Ask investors the same question, and you get a very different answer.

"The leader is not determined only by its operating metrics (anymore),” Sudhir Sethi, founder, chairman and MD, IDG Ventures India, said at a conference organised by VCCircle recently. Leadership “is also determined by how much capital comes into a company”.

The company, just eight years old, is valued—on paper—at an estimated $12 billion, based on a whopping 11 rounds of funding, the last of which brought $700 million into a company that continues to bleed cash.

While the company wouldn’t confirm, it is estimated to be losing $35 million, or Rs 217 crore, a month as it tries to cement its lead as India’s No. 1 online seller of everything, from mobile phones to computers to clothes.

And that was before Flipkart got into an expensive battle for market share with another well-funded India start-up, Snapdeal, even as US-based Amazon also decided to double down on its own India bet.

Flipkart’s last reported valuation—which is higher than the global startups like AirBnB, is already roughly three times its gross merchandise value (GMV) or the entire value of goods the company sells.

And it isn’t alone. Snapdeal, which is reportedly raising a new round at a $5 billion valuation, is burning through its cash at an estimated $25 million, or around Rs 150 crore, a month, according to industry estimates. The company didn’t respond to an email seeking comments.

There is at least one article of faith that is driving both the burn rates and subsequent funding rounds: try to be #1 (or maybe #2) before any of your rivals buy their way into that leadership position. 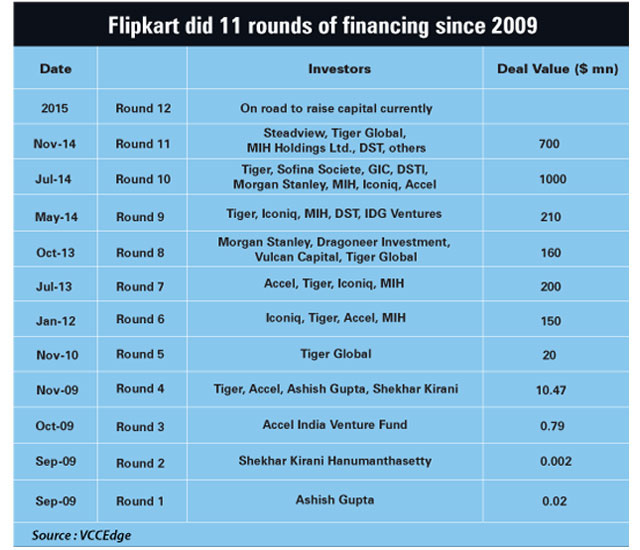 Some “80-90% of the money made in the last 10 years from tech investing has actually been made by No 1 guys in the space and not No. 2’s,” says Anand Prasanna, the Shanghai-based director of private markets at Morgan Creek Capital Management, a US investment firm managing $6.5 billion on behalf of institutions and university endowments. “And to be the No. 1, you have to go out there and capture the market before anyone else does. If it means you have to burn a lot of money to get there, that has to be done."

Added IDG Ventures’ Sethi: “As VCs, (we) plan with entrepreneurs in such a way that, while they build a strong company, they also need to over-capitalize it.”

Another rationale being offered up for the overcapitalization comes from the ‘offense is the best defense’ school: it can help scare off other investors who might be considering putting money into a second or third company in the same space.

“The gap is not just in how much you scale, but also in how much capital do you have and how much you are going to attract," said Sethi, who was speaking at VCCircle India Limited Partners Summit 2015.

Consider Taxi For Sure (TFS), the taxi rides aggregator, which had to sell out to rival Ola Cabs in a $200M cash and equity deal after it failed to raise a new round even as well-capitalized rivals started pulling away.

TFS, which was said to be burning through $3-4 million a month, was starting to run out of cash amid a price war after Ola raised $200 million last October in a round led by Japan’s SoftBank. While TFS also looked to raise capital, commitments didn’t come fast enough as potential investors saw a sector where Ola and US giant Uber could potentially outspend others.

"One of the biggest learnings that we had in Taxi For Sure was that the ability to raise funds is now an important characteristic of an entrepreneur,” says Sanjay Nath, founder of Blume Venture Advisors, a Mumbai-based early stage venture capital firm.

For now, the easy money chasing Indian startups, in the hopes of striking future IPO or other lucrative exit deals, is smothering questions around how startups are actually spending their money.

Global investors have invested at least $4.36 billion in Indian internet ventures in 2014, according to data compiled by VCCedge, compared to $1.1 billion  in 2013. The capital continues to flow as investors have already invested $1.2 billion in the sector in the first three months of 2015.

"What is going on in the internet space in India right now is basically a land grab. Investors are rushing in to make sure that they get the right companies in the right categories," says Pradeep Tagare, director, Intel Capital, the corporate venture capital arm of Intel Corp, which has already committed some $300 million in India.

So, what about how founders are actually spending the money?

"If you are spending millions of dollars in a branding exercise, that’s questionable, but if you are spending money on getting very senior talent/ grey hair on board to a startup founded by a bunch of young IIT kids, it (still) makes sense," says Blume’s Nath.

To be fair, some of the fundamentals driving India’s digital startups boom are supported by strong macro trends: growing number of smartphone users, increasing internet penetration, and an urban middle class seemingly more and more comfortable living their everyday lives on the Internet, be it booking travel, ordering cabs or buying and selling used goods.

The conventional wisdom is that India’s internet is for real, this time around. Transaction worth billions of dollars have already happened online in just the last 7-8 years, going by the GMVs reportedly recorded by all major e-commerce firms.

And money from all corners, including those prone to much higher risk profile, is fuelling a valuations boom.

Behind the so-called front-end investors, typically seasoned technology investors, “we are seeing all kinds of investors - pension funds, hedge funds and family offices who have no or very little clue about what actually is going on here,” in India, says Pradeep Tagare, director, Intel Capital, the corporate venture capital arm of Intel Corp.

“They are banking on the fact that category leading investors are coming into this space and they don’t want to miss on what is going on. And this is what I am worried about because this flow of capital can stop in a heartbeat," laments Tagare.

"Cashburn is not an end in itself,” says Ambareesh Murthy, founder and CEO of online furniture seller Pepperfry and former Ebay India country manager. But “we cannot confuse frugality with some of the strategic objectives that high-growth startups need to achieve."

Some the current investors are also telling themselves that they are in the company of some of the biggest global investors who are trying to replicate big, successful bets they have made outside India, especially in the US and China.

“What we are seeing right now is completely being driven by foreign investors—the likes of Tiger Global, Steadview Capital, Falcon Edge Capital, SoftBank and Valiant Capital. The spaces that are hot in the Valley are hot for them in India too," says Kumar.

Despite a small but growing chorus of voices talking about “bubbles,” especially in Silicon Valley—and what a slowdown there could mean for money coming into India, no one is willing to use the “B” word here. At least not yet.

To be sure, there are those who actually think burn rates are a bad metric. Writing in TechCrunch.com, Scott Nolan of Founders Fund had this to say: "Burn rate (net cash outflow per month) is a vanity metric. Just as top-line revenue doesn’t tell you much about the health of a DJIA blue-chip, burn rate says very little about whether a startup is on track."

There is a lot riding on Flipkart, say some.

“If Flipkart is currently valued in the range of $15 billion, that means anyone who is coming in right now wants to get at least 3x on this money. This means you want to be $45 billion (as it gets to a possible IPO-led exit),” according to Mahesh Murthy, managing partner of early stage investment firm Seedfund.

Even Flipkart says it will take a couple of years at least to get to profit, let alone any potential IPO. Until then, the motto seems to be “burn, baby, burn” for everyone in digital India.