Cab aggregators Ola and Uber are marching towards sustainability as the firms have been able to control costs and bring down incentives significantly, reveals a report by research and advisory firm RedSeer Consulting.

The report, which analysed trends in the Indian consumer Internet market, showed that the incentive structure of cab aggregators fell from 75% of gross booking value (GBV) in March 2016 to 25% in June 2017, a drop of 50%. 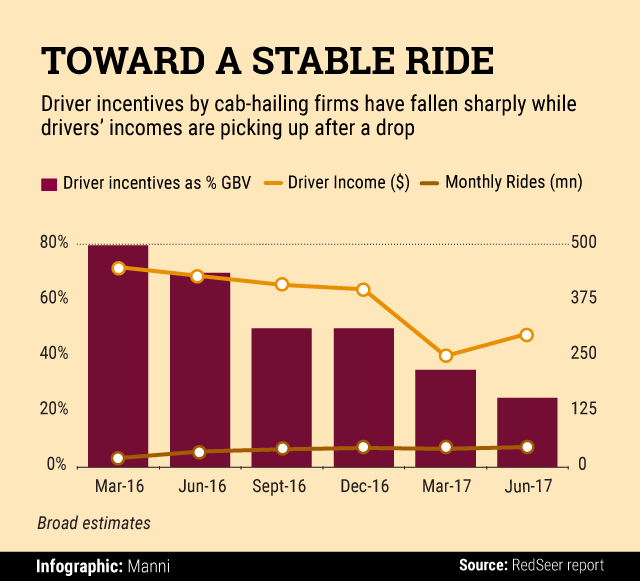 At the same time, the industry has been able to stabilise driver incomes and maintain a healthy level of monthly incentives, the report added.

According to the study, the increased attention on cost reduction has not impacted the growth of customer rides significantly. The number of monthly rides has grown more than 120% over the same period.

Uber recently claimed that it completed 500 million trips in India after four years of operating in the country. It also is experiencing 2.5-fold growth year-on-year as of June 2017.

According to RedSeer estimates, even with a considerable reduction in incentives, drivers’ monthly take-home income (after EMI and other related expenses) has remained about Rs 18,000, which it claims is 50% higher than what a driver would earn in the offline taxi space.

Carpooling, which is relatively new to the Indian market, has been picking up impressively—it has grown by over 22% in the last quarter, said the report.

According to Dhananjay Sharma, associate consultant at RedSeer Consulting, the online taxi market is worth about $1.8 billion dollars currently. Carpooling comprises about 20%-25% of the overall rides in metros.

Food-tech to be billion-dollar industry by end of FY17

After an eventful 2016, the food-tech industry, which witnessed multiple shutdowns, pivots, and layoffs, is growing strong with key learnings from the past two years, leading to an improved focus on consumer satisfaction and key geographic areas, RedSeer observed in its report. 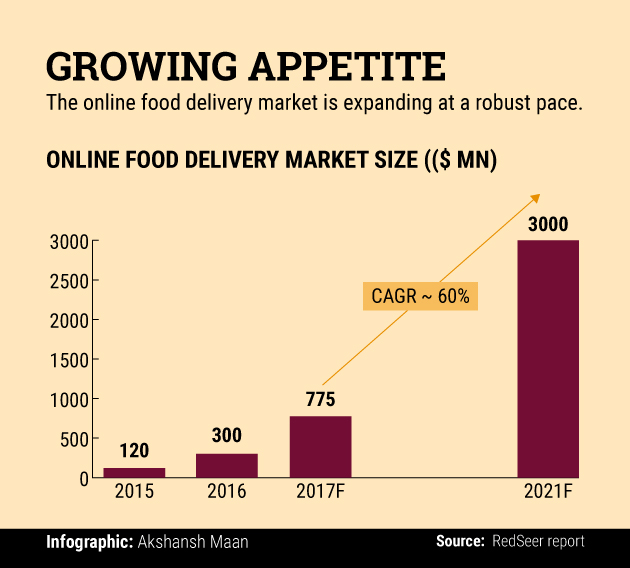 The industry is expected to further grow as the players are now willing to spend on marketing campaigns and increase the frequency of offers and discounts.

2016 ended with the industry growing to $300 million in gross merchandise volume (GMV), marking a 150% rise over the previous year.

“2017 started off with both aggregators and Internet kitchens present in prominent cities improving their unit economics, led by a reduction in delivery costs and increasing penetration in existing markets,” the report said.

According to the research firm, the daily average order volume is about 325,000, the average order value is Rs 350, the average delivery cost Rs 60, the average delivery time 42 minutes, commission paid to third-party platforms for sales leads (when delivery is done by the restaurant itself) is 10%, commission paid to third-party platform for sales leads and delivery 20%, and average share of share of online orders (for restaurants partnered with multiple platforms) is 30%.

Driven by the ever-increasing online adoption, middle India, primarily the Tier II population, will account for half of all the e-tailing business in the country, the research report finds.

Middle India currently contributes to about 35% of the online market share but accounts for 65% of the overall retail market. The growth is triggered by increased supply and demand in addition to the emergence of a number of growth enablers in the ecosystem.

For the country’s top e-tailers, the focus is slowly shifting out of the metros to target the untapped markets outside the big cities. They have been adding products and brands, such as Billion and Xiaomi, which are specifically in demand in tier II+ cities. “Both delivery speeds and delivery reach have improved in tier II+ cities in the past 1-2 years due to the addition of more and more fulfilment centres and warehouse by the players,” the report said.

With growing disposable income and comfort with online shopping, there has been an exceptional surge in demand in Tier II cities particularly during the special ‘sales’ events organised by the online companies. E-commerce firms are clearly targeting middle India as it is the biggest piece of the pie in the offline retail market.

According to the report, middle India is heading the Internet revolution in India with increasing Internet penetration and as a result, enablers are already in place to drive growth. Middle India is expected to comprise the maximum number of customers for online shopping.