On Monday, the Telecom Regulatory Authority of India (TRAI) released a regulation and associated explanatory memorandum prohibiting discriminatory tariff for data services. This has elicited interest and responses from all over the world. We watched the Facebook stock price curiously over that period:

On 4th and 5th (Thursday and Friday), there were rumours in the Indian press about what TRAI was about to do. After that, when the US market opened, they may have had some impact. On Monday, the US market opened after the TRAI regulation had been released. Overall, in this period, the Nasdaq index dropped by 6% while Facebook dropped by 12%. Perhaps some of this was caused by the TRAI action. 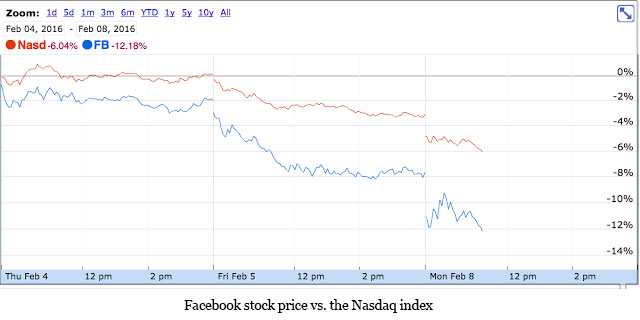 The TRAI regulation was preceded by an extensive consultation process initiated by TRAI in December 2015, where it posed the following question: Should telecommunication service providers (TSPs) be permitted to charge consumers for data based on the content that they access?

One group, led mainly by TSPs, favoured differential pricing on the grounds that it would increase Internet penetration, encourage investments in infrastructure and allow for the development of innovative products. The supporters of net neutrality disagreed. They argued that content-based discrimination would vitiate the basic principles of the Internet, lead to discriminatory practices and hamper competition and innovation among content providers. TRAI ultimately chose to answer its question in the negative, supporting its regulations with an explanatory note that shows the process and rationale for its decision.

Placing it in context

The topic of network neutrality has captured the Indian public discourse for the past several months. Network neutrality is the principle of equal treatment of data packets moving across the Internet. This touches on three core aspects of how TSPs should conduct their business:

The current regulations speak only to the third issue of price related discrimination, putting an effective end to the following types of practices:

The larger issue of how India will deal with the other core components of net neutrality still remains open.

A summary of the regulations

The regulation prohibits TSPs providing both wired and wireless services from (i) offering differential pricing to consumers, based on the type of content being accessed; and (ii) entering into agreements that have a similar effect. TRAI's rationale for moving in this direction rests on a detailed explanation of the basic architecture of the Internet, which is grounded in the idea of openness. Besides this, the explanatory memorandum also speaks about the market failures of information asymmetry and negative externalities, which created a need for regulatory intervention.

The prohibitions are subject to two sets of exclusions. First, TSPs are permitted to have differential pricing in closed communication networks - where the data is not transmitted over the Internet. This could include local intranet services and products like Internet Protocol Television (IPTV). The law however guards against potential misuse of this provision by saying that TRAI will keep a watch on practices that use the exception to evade the discriminatory pricing prohibition. Second, a reduced tariff can be charged in case of emergency services, subject to reporting to TRAI within seven days. For instance, the Chennai floods saw the instant mobilisation of applications targeted specifically for relief and rescue work. Such initiatives would not be hampered by the regulation.

The restrictions also do not cover differential pricing that may be charged independent of the content being accessed. To take an example, Aircel offers a limited period of free capped data on purchase of certain mobile devices. Within those limits, the user can access any available content on the Internet. This is not a violation of discriminatory pricing, as defined by TRAI.

Impact on the Internet and its stakeholders

The heart of the new regulations lies in what TRAI has labelled as "the need to preserve the unique architecture of the Internet". This is in line with TRAI's mandate to promote the orderly growth of the sector (i.e. Internet services). Our analysis of the impact on key stakeholders is as follows.

Internet users: The regulations uphold the user's right to choose from among multiple sources of information on the Internet, free from the white noise of discounted offerings. This means that users will have to continue paying for the data that they use while retaining the full freedom to choose the websites and applications that they access.

Some may argue that the regulations potentially harm consumers by slowing down the process of digital inclusion and denying users access to free services. As highlighted above, the restrictions pertain specifically to the use of price discrimination to create "walled gardens" within the Internet. Other schemes that may provide free access to the Internet as a whole will continue to be allowed.

TSPs: TSPs will have to terminate existing arrangements that allow them or their content partners to subsidise access to specific content. They will also have to discontinue schemes that offer content-specific discounted rates. Another important impact will be felt in cases where a TSP is also a content provider - it will not be allowed to leverage its position as a TSP to promote its own content for free.

It is important to recognise that the value of the Internet will grow as more and more people become part of it, a process that is already taking place even without discriminatory pricing. This will continue to translate into economic benefits for TSPs. Their grouse may however be on the denial of the windfall profits that could result through discriminatory practices.

TSPs will have to then compete in the tough commoditised game of producing bandwidth at ever lower prices.

Content providers: The regulations ensure that the Internet will continue to offer a level playing field for all content providers. There will be no entry barriers for small content creators. This will foster greater innovation and competition.

Those that had already entered into private arrangements with TSPs will of course have to alter their plans to bring them in line with TRAI's regulations. Paying the TSP will not be an element of business strategy.

Many people from the world of business are used to unlimited complexity in business contracts. Hindustan Lever has all kinds of innovative contracts with distributors, retailers, etc. By analogy, the world of telecom should be similarly unencumbered. However, the revolutionary achievements of Unix and the Internet, from the late 1960s onwards, are rooted in a particular philosophy and design strategy, of openness. We must recognise the value of this philosophy as a universal multilateral disarmament treaty, which ensures cooperation in some respects, and channels competition in others. Net neutrality law formalises the gentleman's agreements which have given hygiene in the past, but the commercial pressures of today's technology world do not give adequate guarantees about the future.

TRAI's differential pricing regulations place India alongside countries like Chile, Netherlands and Slovenia that have also taken a clear stand against differential pricing (or zero-rating in particular). The interesting difference however is the fact that those countries did so within the framework of their net neutrality laws. Others like United States and the new regulations in the European Union have also taken a stand on net neutrality but have decided to consider zero-rating on a case-by-case basis. By ruling on the issue of differential pricing without waiting for a broader net neutrality law, TRAI has in effect won the last battle first, within powers under the TRAI Act, 1997.

The policy analysis will now turn to practices like blocking and throttling. It would make sense to think of deeper amendments to Parliamentary law which address net neutrality in a more complete way.

The authors work with the National Institute of Public Finance and Policy.