There Are Many MakeMyTrip-Like Internet Biz Stories In India

India is the least penetrated Internet economy among the large nations but has finally hit the inflection point, in our view. The last decade of the Internet ramp-up has been painfully slow in India (vs. US/China) constrained by poor IT infrastructure, low broadband penetration, low PC shipments, lack of home-grown innovations, lack of local content/reasons, and VC money chasing more mature non-Internet companies with equally compelling growth prospects.

However, in our view, the next 10-years will bring massive growth in the Internet sector in India supported by highly favorable demographics, growing Internet/broadband penetration, launch of one of the world’s best 3G networks, growing middle class/income levels, noticeable pick-up in tech/gadget and mobile culture, and surge in home-grown Internet start-ups. In our view, India's Internet market is 10 years behind US's and 6 years behind China's in terms of several key factors namely - overall Internet adoption, broadband penetration, Internet adverting, E-Commerce, quality content, and sophistication & functionality of websites. However, until 2015, we expect CAGR of 15% for Internet users, 20% for Internet advertising, 25% for E-Commerce and OTAs. There are four public Internet companies in India i.e. SIFY, REDF and MMYT listed on NASDAQ and Info Edge listed in Hong Kong & India. We are initiating on MMYT with a Buy and $46 PT.

• Inflection point :  In our view, India Internet has finally hit the inflection point. With 81mm Internet users base, increasing time spent online, upcoming best 3G mobile network, younger demographic, growing wealth, and surge in Internet start-ups, India is saliently creating a solid ‘Net economy & ecosystem. The country accounts for 17% of the worldwide population and for only 4% of Internet users. Still, Internet has been growing very fast in India (1,520% between 2000 and 2010) and we expect penetration to accelerate even further with the current infrastructure improvements and growth in wealth and education levels in the country.

• 15%-18% penetration by 2015 : In our view, India has taken much more time to reach 7% Internet penetration than the US, China, and many emerging markets. We believe that by 2015, India will have achieved 15%-18% penetration i.e. 180mm to 200mm Internet users. In addition to growth of the overall Internet user base, the time spend on the Internet has gone up, especially quite dramatically in the last two years.

• Indian E-Commerce share to double by 2013 : E-Commerce adoption is fairly low in India. In our view, ECommerce is trying to grow in India at the same time as the organized retail

•  Indian Online Travel to Reach $9B by 2012 : The most exciting segment of India's Internet sector is online travel which accounts for $4bn vs. $20bn total travel industry.  Travel and tourism is a $40bn industry in India (includes managed corporate travel; $20bn for leisure and unmanaged corporate travel) and online is expected to reach $5.5bn in gross bookings by the end of 2010. While online travel has low penetration, relative to India’s E-Commerce market, it is the biggest category online. We estimate the online travel market will grow at a CAGR of 27.8% between 2009 and 2012 and reach $8.9bn by 2012. Online travel is expected to grow almost twice as fast as the overall Indian travel market during that period. One interesting trend in India is that travel products are the most popular type of products which Internet users research and purchase online. This is very encouraging for the Indian online travel industry and bodes well for all OTAs – domestic and multinational.

• India Is the 3rd Largest Nation for Mobile Internet : Supported by good wireless infrastructure, economical voice/ data plans, availability of cheap handsets, and lower PC installed base, India's mobile market is in many ways more advanced than many mature markets. India has more than half a billion mobile subscribers today (2nd large mobile subs in the world) and very soon it is set to launch the world’s most advanced 3G network that many experts claim to be as fast as WiMAX. In our view, mobile Internet in India is way ahead of mobile Internet in the US and Western Europe because of several factors – 1) the telecom sector picked-up in India

later than in Western countries but that allowed India to benefit from best practices, 2) the PC is less affordable and Internet connections are not that pervasive so mobile has become a gadget of choice to access the Internet, 3) mobile plans for voice and data are highly affordable. Mobile Internet usage is also expected to grow materially over the next 4-5 years as the country upgrades its network and smartphones become more affordable (due to increasing wealth and competitive pricing pressure). According to eMarketer, the number of mobile Internet users in India is expected to grow at the astonishing 111% CAGR between 2009 and 2012. This is about 4x faster than the other BRIC countries. 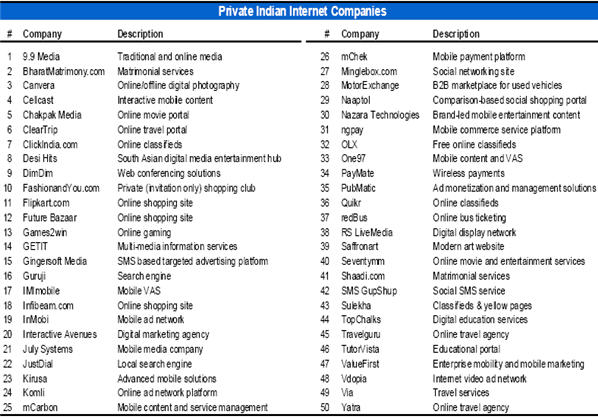 (Sandeep Aggarwal is an analyst with Caris & Company, a California based boutique investment bank that provides financial advisory and equity research services.)