There have been 4,523 private equity investments between 2007 and 2012 with a cumulative value of $80 billion.  If we look at internet and technology, there were 1,038 venture capital or private equity investments worth $7.5 billion within this period.The average holding period for funds was four-five years and hence a lot of exits should have happened in the period between 2012 and 2016. 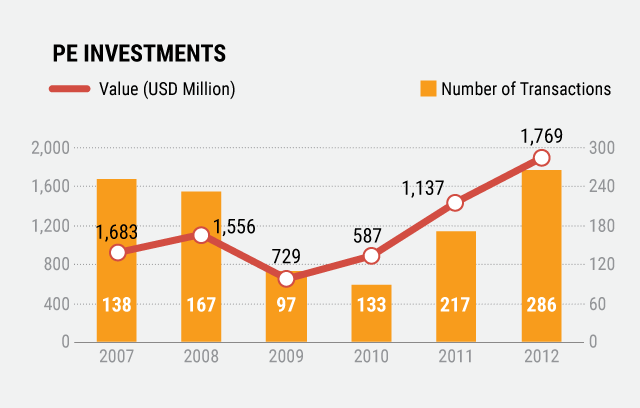 There have been 172 exits of venture capital/private equity backed companies between 2013 and 2016.  Given mortality rates and sub-optimal investments in this higher risk class of investments, the number while, not extraordinary, seems fair enough.  However, what is more interesting is the nature of exits. 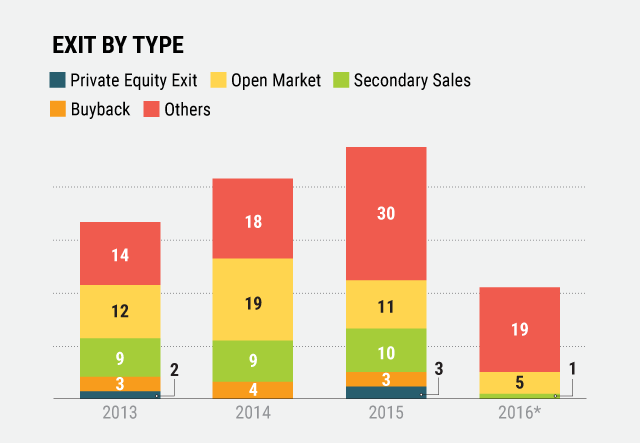 In the period between 2012 and 2016, there have been 59 large IPO-book building issues at the BSE. Of these, technology IPOs have been almost non-existent barring the ones below:

The primary mode of exit that investors favour is the IPO as reflected in most shareholders agreements.  This is because the perception is that, rightly or wrongly, an IPO is still in the investor’s control.  Does the above statistic mean that there have been no large scale successes in technology investing?  If last valued rounds are any indication, this seems to be a fallacy. There are currently 8 Indian unicorns, or companies valued at over $1 billion and by a rough estimate over 150 Indian private companies valued at over $100 million. Agreed that there have been markdowns and down rounds happening, but ups and downs are a part of the stock market as well. An interesting statistic to note is that the median market capitalisationof a listed technology company on the BSE Information Technology Index is around $160 million.

The global scenario is not that different in the technology space.  There are currently 166 unicorns globally (including India) with a combined valuation of $598 billion.  A majority of them are in the US with China following a distant second.  Compare that to the fact that between 2004 and 2015 in the US, of the 35 listed and public companies that reached a valuation of over $1 billion, only 6 reached it prior to their IPOs.  The rest reached them on an average eight years after going public.

We, therefore, seem to be in a global desert for technology IPOs.  There are a number of reasons why companies are preferring to stay private or, if at all, exit only through the M&A route:

One could hope that the tide has turned with 2016 having already seen two domestic IPOs and the listing of Line Corp at NYSE and Tokyo, but these seem to be oases in the tech IPO desert.

The above has implications in all corporate finance activity for entrepreneurs and late stage investors.  Early stage investors are relatively less affected: tag-along rights, sell-on rights, liquidation preference, etc. protect them and in most cases provide enough of a return in a company that has raised multiple rounds of capital.  Late stage investors need to take a hard look at their fund lives.  Earlier standards of 8+2 years or 10+2 years may not be viable for them as technology companies are taking 11 years to go public (Ritter’s research, 2014) and all general partners try to raise new funds every 3-4 years.  Entrepreneurs also need to build businesses to be attractive to potential acquirers from Day 1.  It does seem to be merry days for deal makers.