Surprise is the name of the game

The Reserve Bank of India (RBI) sprung a huge surprise today in its mid-quarter review of monetary policy. The central bank reduced the marginal standing facility (MSF) rate by 75bp to 9.5%. And in a big surprise, it increased the repo rate by 25bp to 7.5% (all 36 participants of a Bloomberg survey expected no change). The RBI communication today highlights a few points:

Normalising near-term interest rates: At the same time, we think the cut in the MSF rate indicates that the central bank is willing to gradually phase out the excessive tightness in near-term interest rates in place since July 2013. The governor, in fact, categorically mentioned that the MSF rate will be brought down over time to its usual level of just 100bp higher than the repo rate. We think, depending on the trajectory of the INR and level of flows under the foreign currency non-repatriable (FCNR) deposit scheme, that this ‘normalisation’ will take place during Q4 13. The RBI also emphasised that today’s move is intended to bring down banks’ near-term funding rates to a more sustainable level and, thus, should be seen as a positive for the banking system and the economy.

Sharing responsibility for a growth revival: While the governor did not want to dilute the RBI’s role in supporting growth over the medium-term, we think today’s communication makes it clear that India’s central bank is not willing to risk its battle against inflation. The RBI’s policy statement subtly hints at a potentially larger role for the government in reviving growth, as it flags the role of infrastructure investments and/or the Cabinet Committee on Investment (CCI) in reviving growth. Also, the central bank continues to emphasise that the MSF rate is the operating marginal rate in the system (and is being brought down), so the repo rate hike should not be perceived as a big negative for growth at the moment.

Given the preference of the RBI to manage inflation and inflation expectations, we do not expect any easing in the repo rate in the near term. The central bank has categorically flagged that inflation is higher than its comfort and household financial savings are lower than desirable. In our view, such guidance does not preclude further hikes in interest rates. However, the RBI’s communication did not provide any strong indication of whether today’s move is a one-off or the first of a series of hikes. While we expect no change in the repo rate near term, the central bank’s communications will likely help to fine tune such expectations. 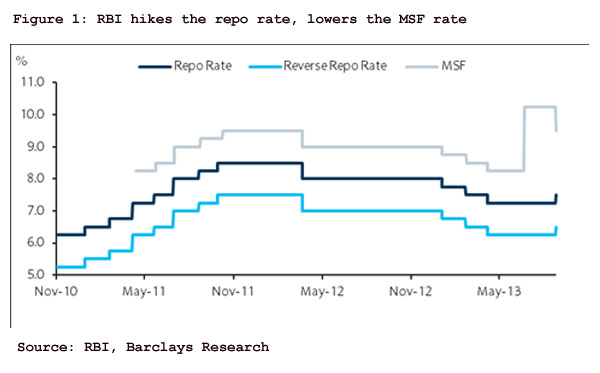