The impact of policy decisions made in 2015, such as those related to small finance banks, payments banks and easing of foreign investment caps in the insurance sector, started playing out in 2016.

As such, this year saw a unique combination of uncertainty for many legacy players and growth prospects for new entrants. Over the long term, this is likely to have a lasting impact on the Indian financial services sector, albeit not without short- and medium-term labour pains.

Broadly, the following trends played out in the banking, financial services and insurance segment this year.

After getting in-principle approvals last year, many small finance banks such as Ujjivan Financial and Equitas Holdings tapped into domestic equity markets to comply with the regulatory norm of minimum 51% domestic shareholding and to raise primary capital to launch operations.

Small finance banks are still fringe players but their rise has hit legacy microfinance companies, with many of them struggling to raise equity funding and offering themselves as targets for full-service financial firms. 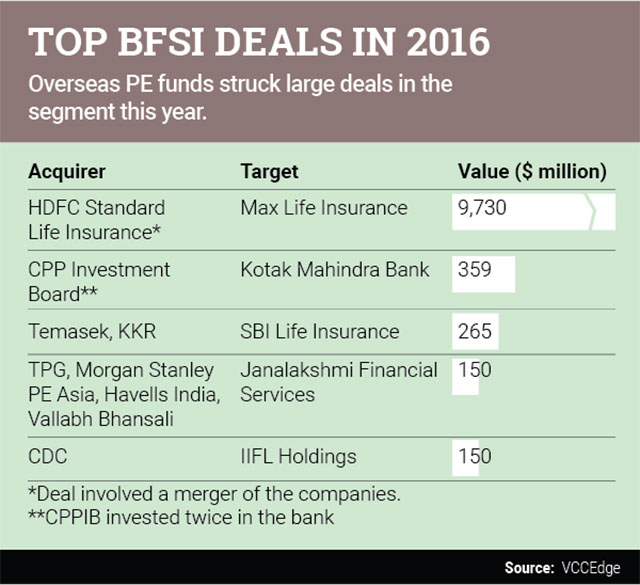 Payment banks, however, have started making their presence felt, thanks to the government's demonetisation drive and the push towards digital banking. Their emergence has also opened up unlikely partnerships, such as state-owned Bharat Petroleum Corporation picking up a 21% stake in Fino PayTech, and lenders like Kotak Mahindra Bank, State Bank of India and ICICI Bank tying up with Airtel Money, Reliance Jio and Vodafone m-Pesa, respectively.

“Financial services in 2016 became what New Tech was in 2014-15, in terms of robust investor appetite and new ventures backed by early-stage investors,” said Sumit Jalan, managing director and co-head of investment banking and capital markets for Credit Suisse in India.

Chandra said a segment which will continue to be attractive over the next few years is fin-tech. The segment saw PayU, an online payments company owned by South Africa’s Naspers, acquire India’s Citrus Pay for $130 million.

In another instance, AION Capital Partners Ltd, along with former senior executives of GE Capital Pramod Bhasin and Anil Chawla, closed the acquisition of the commercial lending and leasing business of GE Capital in India.

A host of high-profile bankers quit their cushy jobs this year. Some wanted to try their hand at fintech, which shows the potential in the segment, while some others moved on to float their own investment and advisory firms.

Jaspal Bindra, former Asia Pacific CEO at Standard Chartered Bank, joined as executive chairman of Centrum Group. Veteran banker Rajiv Sabharwal resigned from the board of ICICI Bank to consider other options, including taking up entrepreneurship.

Insurance sees a flurry of action

The lifting of the FDI cap in the insurance sector from 26% to 49% prompted many foreign JV partners to increase their stake in the Indian entity. While some insurers maintained the status quo for multiple reasons such as high valuations, a few others opted for an initial public offering.

“Looking ahead, it is likely that some smaller players may look to consolidate with larger players to be more relevant in an under-penetrated market such as India," Kotak’s Shah said.

After demonetisation, the softening of yields due to surplus liquidity could help Indian banks in registering Rs 38,200 crore of potential treasury gains for 2016-17, says India Ratings and Research. Those potential treasury gains are significantly large, considering the banking sector reported a Rs 23,600 crore profit for 2015-16 (public-sector banks reported Rs 17,700 crore in losses), said Udit Kariwala, an analyst with India Ratings.

However, the impact of demonetisation is already visible in slowing growth in non-food credit, a proxy to measure overall credit growth in the banking system. The slowdown in asset growth at public-sector banks is being captured by NBFCs. As of 2015-16, the market share of NBFCs in overall credit outstanding was 15%, which is likely to increase to 18% in two to three years.

Chandra said there is a likely to be a transient impact on collections and, consequently, on asset quality due to demonetisation. However, if companies transition their customers to electronic or digital collections, operating expenditure will likely come down and profitability will improve, he said.