The firm did not give details of the equity dilution, but last month it had sold 10 per cent to Philippine Long Distance Telephone Company (PLDT), a leading telecom operator in the Philippines, which set a valuation of around $4.45 billion ahead of the IPO. The public issue should give a post money valuation of $5.4 billion. 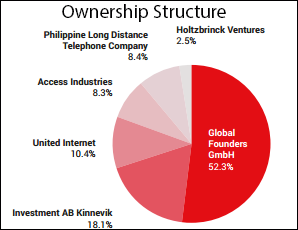 The IPO consists of only primary capital and none of the current shareholders will sell any shares. The firm is promoted by Samwer brothers and counts Kinnevik, Access Industries, Philippine Long Distance Telephone Company, United Internet and HV Holtzbrinck Ventures as investors.

The new shares will be of the same class and bear the same rights as shares held by current Rocket shareholders. All six shareholders will sign lock-up commitments not to sell or otherwise dispose of their shares for at least 12 months. Rocket intends to use the proceeds from the IPO to finance its future growth through the launch of new businesses, providing further equity capital to its network of companies.

Berenberg, J.P. Morgan and Morgan Stanley are acting as joint global coordinators of the offer, and together with BofA Merrill Lynch, Citigroup and UBS Investment Bank, act as joint bookrunners.

Oliver Samwer, founder and CEO of Rocket, said: “We believe the Internet will play a transformational role in people’s lives everywhere, particularly in emerging markets. We have developed our own proprietary technology, a unique geographic footprint and infrastructure, and best-in-class processes, all supported by outstanding people on the ground all over the world. Taking our company public is the next step in our journey to build the world’s leading Internet platform outside of the US and China.”

Lorenzo Grabau, chairman of the supervisory board of Rocket Internet, said:“Rocket Internet has shown tremendous growth over the past years and has proven that its operating platform is a unique basis to consistently create and scale market leading franchises across the five continents. The IPO is a natural next step in Rocket’s development as it establishes an even stronger foundation to support the acceleration of its international growth strategy.”

Rocket is focused on building online businesses across three sectors: e-commerce, marketplaces and financial technology. It is active in various markets, with a focus on emerging and fast growing economies such as Latin America, Southeast Asia, India and Africa.

The firm said its roster of proven winners had net revenues of €757 million (around $1 billion) in 2013. The firm counts Indian fashion e-tailer Jabong among this group besides others such as Dafiti, Lamoda, Zalora, Namshi, Lazada, Linio, Jumia, Westwing, Home24 and HelloFresh. These ventures are the largest and most mature of the portfolio, according to Rocket Internet.

The firm said its mission is to become the world’s largest internet platform outside of the US and China.

Since its founding in 2007 Rocket has grown significantly, expanding to over 100 countries, with more than 20,000 persons working across its network of companies.

The firm said it is looking to capitalise on four global megatrends: booming smartphone penetration, younger populations of “digital natives” in emerging markets, a growing middle class driving consumption, and the ability of Internet technology to leapfrog the development of traditional physical retail infrastructure in developing countries.

Rocket has established a number of online fashion retailers in Latin America (Dafiti), Russia & CIS (Lamoda), Asia Pacific (Zalora), India (Jabong) and the Middle East (Namshi). Many of these companies occupy leading positions. They are in the process of being combined into the Global Fashion Group later in 2014.

It has further established general merchandise e-commerce companies in Africa (Jumia), South East Asia (Lazada) and Latin America (Linio); an online international home food delivery company (HelloFresh); and home and living companies (Home24 and Westwing). Many of them are among the leaders in their markets.

It benefits from the network effect of market leadership across a large number of business models and geographic regions.

Rocket has established key strategic partnerships with regional telecommunication operators such as Millicom, MTN and Ooredoo, which provide local know-how and access to a large client base, further enhancing Rocket’s ability to build and scale businesses in high growth markets.

The firm said that since its foundation in 2007, Rocket has delivered a return of 25 times invested capital.