Edtech companies BrightChamps and Teachmint; fintech startups like Airtel Payments Bank and Niyo are part of a list of potential unicorns from India, according to a joint report by KPMG and HSBC.

The report titled ‘Emerging Giants in Asia Pacific’ has identified 10 companies from India that can enter the much-coveted unicorn club going ahead. Travel startup Ixigo and big data SocialCops are also a part of the list based on superior technology, hyper localization, mastery of logistics, successful adaptation of business models and culture that retains talent. The report was prepared after analyzing over 6,472 tech-focused startups with valuations of up to $500 million across 12 Asia Pacific markets.

When asked about the timeline of these startups becoming unicorns, KPMG and HSBC declined to comment citing that each of these companies have a different estimated timeline to the enter the much-coveted club. 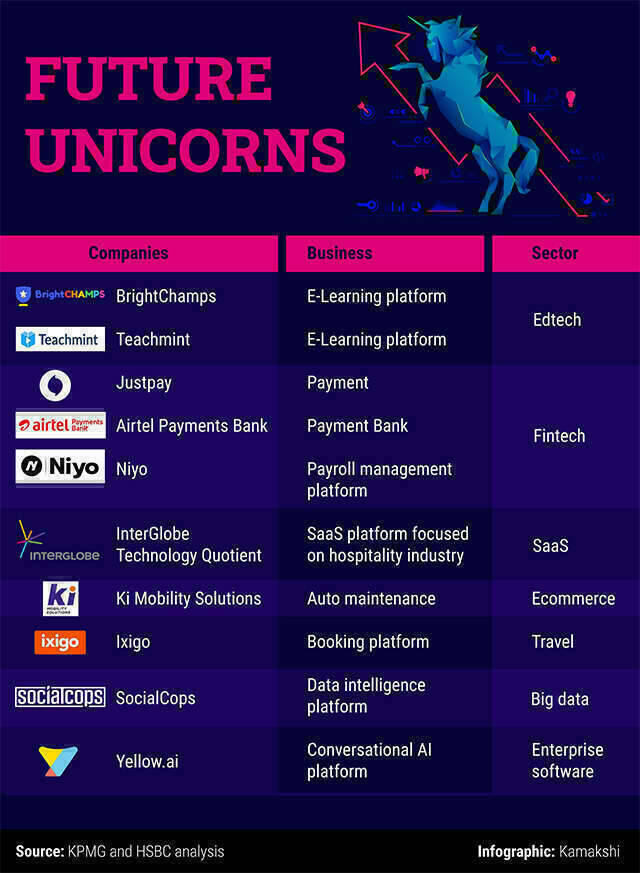 The report further says that 2022 will exceed both 2020 and 2019 funding levels in the Asia Pacific region.

It added that the emergence of new sector verticals such as non-fungible tokens (NFTs), decentralized finance, blockchain, electric mobility and neurotechnology is attracting record-breaking investments, leading to a proliferation of larger and more valuable startups in the region.

“2022 has been a landmark year for India’s start-up economy. India already has 11 unicorns in the first quarter of 2022 and the rate of increase isn’t letting up. Most of India’s unicorns have emerged because of inefficiencies in the market and this has created opportunities for entrepreneurs to come up with solutions,” said Amarjeet Singh, partner and national lead – emerging giants and startups, KPMG in India.

As the world’s biggest fintech adopter, the APAC region has experienced a boom in financial services transformation within the last two years. Considerable interest in cryptocurrencies has also led to a surge in crypto financial services providers and blockchain players, the joint report stated.

Highlighting the rise of importance of environmental, social and governance (ESG) in companies, the report noted that growing pressure for an ESG focus in business and investment strategies in order to meet climate targets will likely drive an explosive demand for green technologies and services across every industry, creating significant opportunities for emerging giants.

“Fast-growing tech startups are the new wave of SMEs contributing towards economic growth and more. Looking ahead, a global push towards carbon-neutrality will be a major driver for innovation as traditional sectors go green and emerging giants likely to play a key role in developing technologies that can reduce carbon emissions and promote more responsible stewardship of the environment. Asia will be a crucial battleground in the fight for a more sustainable future,” said Honson To, chairman, KPMG Asia Pacific and KPMG China.