Private equity funds keenly invested in the Indian infrastructure sector in 2009-2012, before slowing down in the past three years. This was mainly caused due to lack of capital market appetite post 2010-11, thereby putting a question mark over an important platform for PE exits. 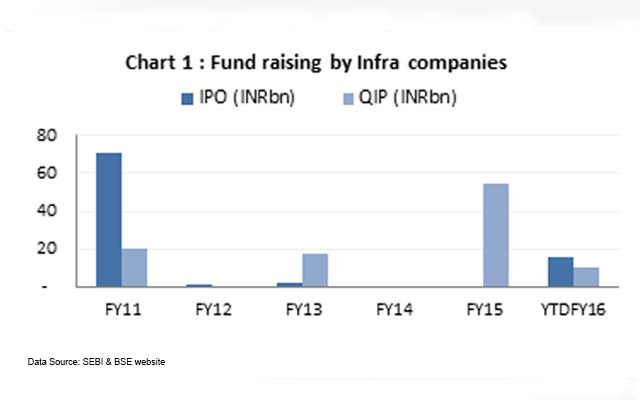 Lack of successful exits has made PEs cautious about new infrastructure investments. They have realized that it is better to invest in, and ‘own’ fewer assets (on which they can have stronger focus), rather than investing as a minority stakeholder in a holding company of multiple assets (where one–two bad assets can impact your overall investment).

This can be seen in the changed strategies of infra-focused funds like IDFC and SBI Macquarie toward looking at more control deals.

However, in the last 18 months (primarily in the post-Modi era), about Rs 8,000 crore has been mobilized by infrastructure companies through IPOs/QIPs. Of this, 60 per cent to 70 per cent has been utilized toward deleveraging, and balance towards growth and secondary stake sales.

The sector has also seen considerable strategic interest enabling infrastructure companies to unlock value and deleverage themselves. Some key asset sales by infrastructure companies include sale of Agra–Jaipur road asset by Madhucon to I Squared, sale of Himachal Baspa and Bina power plants by Jaypee group to JSW Energy, sale of nine road and power assets by Gammon Infra to Brookfield, sale of Swarna Tollways to SBI Macquarie, sale of Korba West Power project by Avantha group to Adani, sale of Dhamra Port by L&T and Tata Steel to Adani.

In the last 18 months, about $6 billion has been mobilized through sale of infrastructure assets.

With NBFCs like L&T Finance, Tata Capital and IDFC cutting down on mezzanine debt financing, new credit funds like Edelweiss, Bank of America Merrill Lynch, AION, KKR etc, are attempting to fill the void created and are looking at multiple opportunities.

The one segment of infrastructure which has been the darling of PE investors over the past two-three years has been the renewable space, given the Modi government’s thrust on green energy.

A total of about Rs 18,500 crore has been committed in the renewable energy space through several announced PE/M&A deals in the last four years, as shown in Table 1. 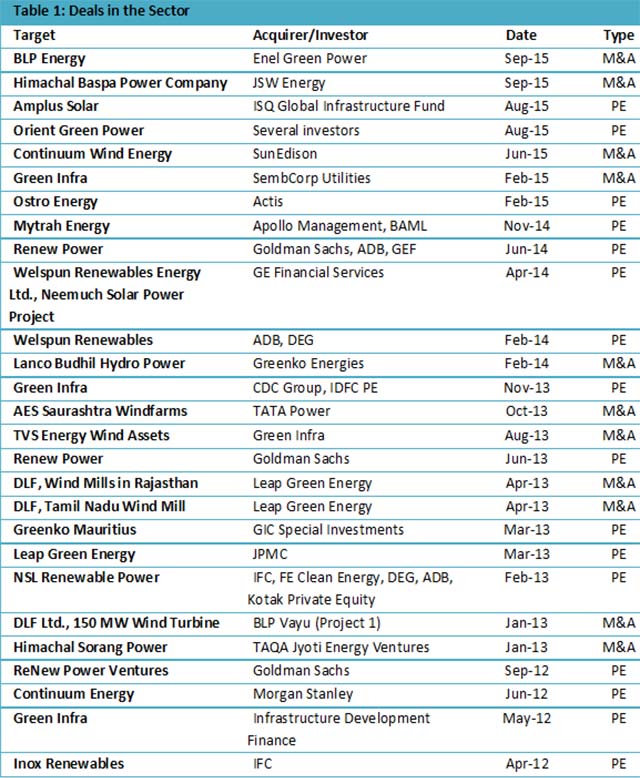 The government has announced a slew of policies such as reintroducing 'generation-based incentives' for wind power projects, reduction of excise duties by 2 per cent on capital goods import, FDI up to 100 per cent permitted under automatic route and proposed solar and wind parks and renewable-focused SEZs to boost the renewable segment. Other incentives such as capital and interest subsidies, viability gap funding, concessional finance, fiscal incentives and trading of Renewable Energy Certificates have also been announced.

(Ashish Agarwal is a director at infrastructure at Equirus Capital)