Monsoon session: Will Narendra Modi govt be able to push GST through? 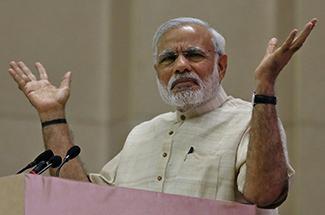 As the monsoon session of Parliament kicks off on Monday, all eyes are on whether the government can finally get the much-delayed bill on the Goods and Services Tax (GST) passed by the Rajya Sabha.

Although the legislation, which aims to overhaul the indirect-tax system in the country, was passed by the Lok Sabha in November last year, the Narendra Modi-led National Democratic Alliance (NDA) government has been unable to push it past the upper house as it is continues to be in a minority there.

A game of numbers...

After the recent Rajya Sabha elections, however, the math seems to have turned into the NDA’s favour, but only just. Along with seven nominated members, the Bharatiya Janata Party (BJP) and its allies who constitute the NDA, have 81 representatives in the 244-member upper house. The opposition, which primarily comprises the Congress and its allies under the United Progressive Alliance (UPA) umbrella, has 68 members. The remaining 96 belong to the non-NDA, non-UPA parties.

Kumar and Ahluwalia, however, can take heart from the fact that not all opposition or non-NDA parties are against the passage of GST. Several parties, including the Trinamool Congress, the Biju Janata Dal, the Samajwadi Party, the Bahujan Samaj Party and the Janata Dal (United), otherwise bitterly opposed to the NDA, are on board on GST. Also, the AIADMK, led by Tamil Nadu chief minister J Jayalalithaa, is as yet undecided on which way to go. 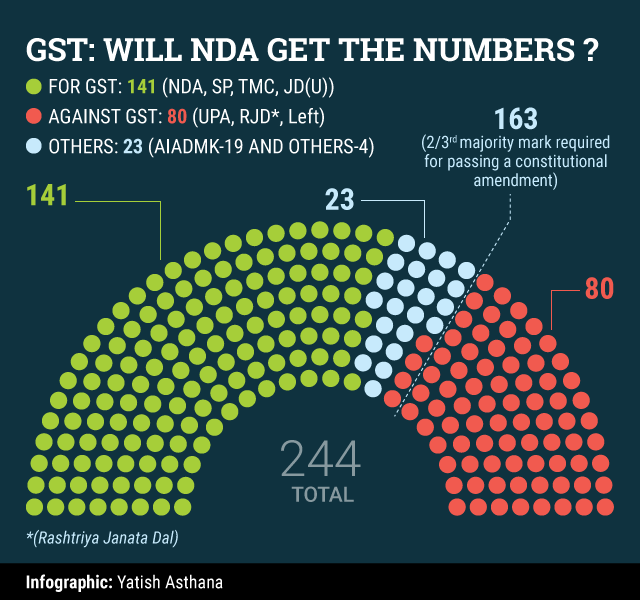 On Sunday, at an all-party meeting, Modi tried to strike a conciliatory note by appealing to all the opposition parties to come on board and pass the bill. "GST is of national importance. The issue is not which government gets credit,” Modi said, according to a report published by NDTV. “All of us represent both the people and parties and let's keep national interests above everything else," he added.

The opposition, led by the Congress party, has said that it will support any bill, as long as the government comes up with a “concrete draft proposal”. But political events, including those in Arunachal Pradesh and Uttarakhand, and the ongoing violent protests in Jammu and Kashmir, may give the opposition parties a handle to stall legislative business.

Ironically, the UPA itself had championed the bill while it was in power, and then NDA had stalled it.

Once the GST is implemented, central taxes such as excise, service tax and customs duty will be subsumed within it. At the state level, the value-added tax (VAT), luxury tax, lottery taxes, entertainment tax and electricity duty, among others, will go. All direct taxes will remain unchanged.

The Congress has been demanding that an 18% cap on the GST rate be formally mentioned in the constitutional amendment bill, something that the NDA has staunchly opposed. Notwithstanding the stance taken by political parties, experts are convinced that the implementation of the GST will augur well for the economy.

Bipin Sapra, partner, indirect tax at audit and consultancy firm EY, feels that while the goods industry will benefit, the services industry may face some initial problems. “What we have seen in other countries is that the first year is the most difficult year, and it generally starts to get better after that,” Sapra says, adding that things will begin “turning around” a couple of years after it is implemented.

Renu Kohli, a senior consultant professor at the Indian Council for Research on International Economic Relations, says that after GST, consuming states will benefit more than manufacturing states as it is a sales-based tax.

Here’s a brief look at how the GST might impact various sectors of the economy.

Startups: The prevalent system with different procedures and fees across different states complicates inter-state transactions. With GST in place, a uniform tax regime will make it easier to start new business. At present, any business with a turnover of Rs 5,00,000 has to pay VAT. With GST, this limit will go up to Rs 10,00,000. Moreover, companies with a turnover of Rs 10-50 lakh will end up paying lower taxes. E-commerce companies may have to contend with the lack of clarity in the definition of terms ‘aggregators’ and ‘operators’ in the new bill. While operators will be liable to pay taxes, aggregators will not.

Agriculture: GST will help make the agriculture market more efficient, as all the taxes will be subsumed under a single rate, making the movement of agricultural commodities across states hassle-free. Transportation time and wastage, especially in case of perishables, will come down. Some experts, however, say that GST may translate into higher agricultural prices, which will favour retailers, but not farmers.

Manufacturing: The GST regime is expected to boost manufacturing since the removal of cascading taxation will bring down production costs. Easy movement across state borders will make the process of supply and transportation of finished products, and raw materials, among others, hassle free. On the flip side, however, compliance requirements may increase.

Telecom: GST is expected to put an end to issues related to classification of software, franchise fee,  and SIM cards, among others. Like all other sectors, the elimination of duality of taxes is expected to help the growth of the telecom sector as well. However, if the proposed rate is higher than the current rate, it may hurt customers.

Pharmaceuticals: Warehousing plays an important role in this industry. In order to save on central sales tax, most pharma companies maintain their warehouses in different states, adding to the transaction cost and compliance requirements. Post-GST, pharma companies will be able to set up warehouses at strategic locations. The tax credit regime under GST is expected to help reduce the cost of goods sold. On the other side, if the expected rate of GST is higher than the current tax rate on medicines, it may lead to medicines becoming costlier.