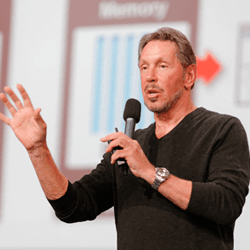 Larry Ellison, founder and chief of Oracle Corporation, has stepped down as the chief executive officer (CEO) of the global technology giant in what marks the end of an era for celebrity IT honchos, but said he will continue as an executive chairman of the board and as CTO of the firm, which should keep him closely involved in the products side of the business.

Ellison was one of the Big Four associated with founding or leading the first generation of big IT firms along side Apple's Steve Jobs, Intel's Andy Grove and Microsoft's Bill Gates. Grove stepped down in the late 90s while Gates passed on the baton in 2000. Jobs died three years ago.

Jeff Henley, who has been serving as Oracle's chairman for the last 10 years, becomes vice chairman of the board.

Oracle said Ellison will be succeeded by Safra Catz and Mark Hurd who will be co-CEOs. Both are currently co-presidents of the firm.

While manufacturing, finance and legal functions will report to Catz; sales, service and vertical industry global business units will continue to report to Hurd. The two co-CEOs will report directly to the company's board as against solely Ellison till now.

“The three of us have been working well together for the last several years, and we plan to continue working together for the foreseeable future. Keeping this management team in place has always been a top priority of mine,” said Ellison.

All software and hardware engineering functions will continue to report to Oracle chairman and CTO Ellison.

“Larry has made it very clear that he wants to keep working full time and focus his energy on product engineering, technology development and strategy,” Oracle board's presiding director Michael Boskin, said in the statement.

“Safra and Mark are exceptional executives who have repeatedly demonstrated their ability to lead, manage and grow the company. The directors are thrilled that the best senior executive team in the industry will continue to move the company forward into a bright future,” Boskin added.

Safra, a former investment banker, has been with Oracle for the last 15 years. Said to be the world's top female corporate executives, she has been closely involved with Oracle's acquisitions, including the multi-billion dollar deals to buy PeopleSoft and Sun Microsystems.

Hurd is the former CEO of HP, who was roped in by Ellison after HP fired him over a controversial sexual harassment charge.

Based in Silicon Valley, Oracle is one of the world's biggest enterprise software companies. The company offers a line of software products that help large and medium-sized companies manage their operations. It is also a large player in cloud-based services.