INR: Oversold, but no quick resolution

INR has depreciated swiftly to all-time lows. Though it looks overdone, the fall is both fundamental and sentiment driven. However a recovery from here will likely be more contingent upon domestic factors – current account deficit, oil prices, RBI’s policy priority - than global risk appetite which will continue to impact emerging markets. We expect more short-term pain on the INR (a move towards 58.00) before it stabilises around 53.00-54.00/USD in the next 3-6 months. 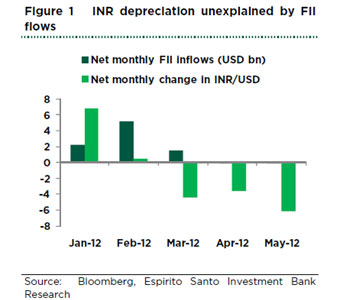 Even though MSCI India is up 4.5% YTD, the INR has faced the worst decline in value in its history. While the new decline was triggered by the worsening situation in Europe, it has been exacerbated by worsening domestic fundamentals. It’s interesting to note that the INR has depreciated by 10% since Mar’12 even when FIIs sold a meagre USD 375 mn in Indian equities. We think the anomaly can be explained by two factors: 1) FII outflows in debt, amounting to USD 600 mn, post the 50 bps policy rate cut in April; and 2) More importantly, the rapid widening of the trade deficit resulted in excessive demand for USD. We think what started off as excessive demand for USD has become increasingly speculation driven with the majority of the market following “good news-sell INR/ bad news-sell INR” modus operandi, the result being a selffulfilling prophecy of lower INR. 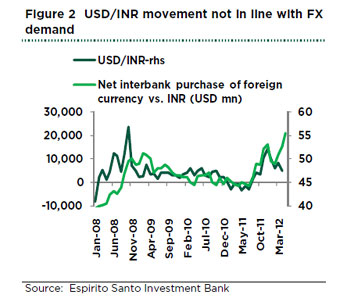 Is the INR now looking attractive?

turnover in the Indian market, which has rather moderated in the last few months. This too suggests some degree of illiquidity and price speculation.

Oversold, but unlikely to revert in a hurry

To the extent the current surge in USD/INR is driven by high oil import demand, true gains can accrue only if: 1) there are signs that the correction in Brent is

sustainable; and 2) oil import intensity moderates. We believe the current account deficit in FY13 can stay contained at around 3% of GDP only if the recent correction of 15% in oil prices and 10% in gold prices were to be accompanied by a demand reduction of 15% in gold.

We think the deterioration in INR is both fundamental and sentiment driven. Overall we expect more short-term pressure on the INR given the global backdrop. We expect the USD/INR to broadly average 53.00-54. in the next three to six months, though a further flight from risk, the USD index running higher on a consistent basis and a potential Greek exit from Euro Zone may result in depreciation above 58.00. While a fair value of USD/INR on a 36- country trade-weighted basis would be close to 50.00, a return to below 54 levels would need a change in trade dynamics, some resolution to the EU crisis, and a return of confidence in the Indian government, none of which is likely in the near term. Our call of another 75-100 bps rate cut by the RBI, in an effort to address the growth concerns together with the recent correction in oil prices and gold demand would likely be a positive.

A decline in business optimism and company specific performances should ideally drive earnings downgrades and de-rating, but in the near term we expect INR-led EPS upgrades for most technology companies. Amongst the companies under our coverage, we think FY13 estimates are likely to go up by 5% to 7% due to changes in INR assumptions.

Emerging-market equities, including India equities, rebounded in Q1’2012, with MSCI-EM up 14% after having fallen by 20% in 2011. The gains were fast erased in

the last two months with the full-blown crisis in Greece and the growing likelihood of a hard landing in China. The nervousness among investors is not being reflected

in bond markets. JP Morgan’s GBI-EM Global diversified index, which captures the returns on local currency bonds of Emerging markets, is up 4% YTD. As per EPFR,

Bond funds globally had net inflows of USD 8.55 billion in the week ended May 9, the most in over a decade. This highlights the risk of rising risk aversion, triggering redemptions and hence further Asian and EM FX pressure.

The bonds seem to have benefitted from the fact that there is a captive domestic market for such securities. Local banks, insurance companies and mutual funds are

the big players in the market and tend to hold on to such investments in the event of risk aversion. There are also greater restrictions, in the form of caps, on foreign investors entering EM bond markets, somewhat limiting EM’s vulnerability to sudden withdrawals. Nevertheless, an uptick in redemptions from Emerging

Market and Asia bond funds is a risk.

Have excessive foreign outflows driven the fall in INR? It is interesting to note that the INR has depreciated by 10% since Mar’12 even when FII outflows were a

meagre USD 375 mn during this period. We think the anomaly can be explained by two factors: 1) FII outflows in debt, amounting to USD 600 mn, post the 50 bps policy rate cut in April. While this could have been an initial trigger as also witnessed post the rate cuts by Brazil, the rating outlook downgrade by S&P to ‘negative’ may have also played a role; and 2) A bigger reason though we think is the rapid widening of the trade deficit, resulting in excessive demand for USD. The overall impact of lower global commodity prices has differed from country to country and has been muted for countries that have seen a huge depreciation in the local currency. Net importers, like India, have not found the moderation in the global commodity prices beneficial as this has been offset by depreciation in local currency that makes the imports more expensive. Even with a 14% correction in Brent oil prices in the month of May, correction in Rupee terms is zero because of the depreciation in INR.