In Charts: How Asian companies are at higher risk of default this year

Asian companies are at a higher risk of default in the coming quarters than last year, a Reuters analysis of their credit ratios showed, as the coronavirus pandemic has squeezed revenue and made it harder to refinance debt.

One measure of how easily a company can pay interest on outstanding debt – operating profit to interest ratio – fell to the lowest in 11 years at the end of March. The sample took into account companies worth at least $500 million with available data on Refinitiv.

Net debt to EBITDA (earnings before interest, taxes, depreciation, and amortisation), which shows how many years it would take a company to pay back debt, was at its highest since June 2014.

"We expected the pick-up in default rates to be mostly amongst smaller companies who already had a stretched liquidity profile and less access to alternative funding channels," said Alaa Bushehri, head of emerging market debt at BNP Paribas Asset Management.

"This is being exacerbated now by COVID-19 lockdowns, slow-down in activity and a lower commodity environment."

Airlines were the worst affected with flights grounded and people unwilling to travel. Virgin Australia, for example, entered into voluntary administration in April.

Late last month, Moody's forecast the default rate on high-yield debt issued by non-financial Asia-Pacific firms would climb to 6.4% by the end of this year, from 2.3% in March.

Some companies will try to restructure their debt to avoid default, especially offshore debt.

That could be an uphill task as a sharp depreciation in Asian currencies this year has increased repayment costs of companies that have borrowed in dollars and have no natural or financial hedges in place, said Buddhika Piyasena, head of Asia-Pacific Corporate Ratings at Fitch Ratings. 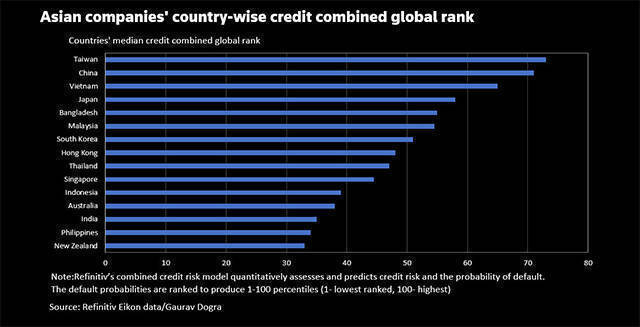 The yield on a bond issued by China's Tianqi Lithium Corp, for instance, climbed to about 60% last month on perceived higher risk of the company missing its interest payments this year. It is currently trading at 40%.

About $100 billion worth of dollar bonds are maturing between June 2020 and December 2021, according to Refinitiv data.

"We expect investors to be increasingly selective in managing their high-yield exposure, which will weaken low-rated companies' access to funding."