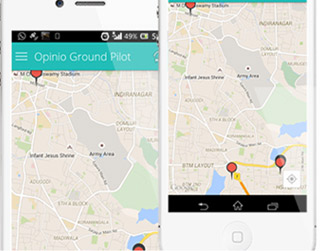 Sands Capital and Accel Partners also put money in this round, Opinio said in a statement.

The company will use the funds to strengthen its technology team, expand to new cities and enhance its product portfolio, it said.

As part of the deal, Delhivery CEO Sahil Barua has joined Opinio's board.

Opinio was founded in January this year by IIT Kanpur alumni Mayank Kumar, who serves as CEO, and Lokesh Jangid, who is CTO.

The company operates in Bangalore, Delhi-NCR and Hyderabad. It delivers products in a radius of five to seven kilometers for small businesses such as restaurants, grocery stores, bakeries and laundry stores.

The company employs a technology wherein it stores the geo-coordinates of customers and claims to deliver orders within 20 minutes. It has made an algorithm which determines how many delivery staff should be assigned for a certain number of deliveries to maximise efficiency.

The startup has 1,500 delivery executives and claims to deliver nearly 10,000 orders a day for more than 100 grocers and restaurants.

Kumar claimed the company is growing 30 per cent week-on-week in all markets. It plans to expand to Mumbai, Pune and Chennai in the near future.

In July this year, the company had raised nearly $1.6 million from Accel Partners.

This is Delhivery’s second investment after it raised $85 million in a Series D funding round led by Tiger Global with participation from existing investors Multiples Alternate Asset Management, Nexus Venture Partners and Times Internet Ltd. In July this year, Delhivery along with Tracxn Labs had invested an undisclosed amount in Bengaluru-based on-demand shipping services startup Parcelled.in.

Other players in the logistics field include Townrush and GoJavas. In the delivery technology space, Bangalore-based startup Locus, which makes a delivery automation software, obtained seed funding recently.

The hyperlocal grocery and food ordering segment has also seen the emergence of a bunch of startups that have raised money. These include Grofers, Peppertap, LocalBanya, Myonsto and iOrderFresh. Most of these are aggregators who essentially provide an online platform to order from local vendors.