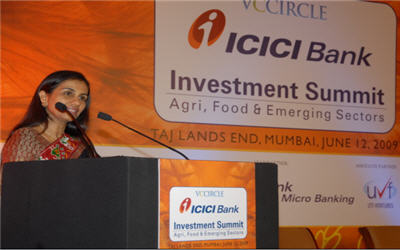 VCCircle ICICI Bank Investment Summit for agri and food sectors in Mumbai saw a massive response from companies, investors, bankers and others in the ecosystem. All told, 400 delegates packed the ball room at Taj Lands End on Friday, June 12, to listen to 26 distinguished speakers - which included successful entrepreneurs, investors, bankers, and lawyers.

In her speech, ICICI Bank MD & CEO Kochhar highlighted the opportunities presented by this space and its importance for India’s stability and growth as one of the world’s largest economies. India provides unique opportunities in terms of its demography, changing lifestyle and increasing consumer awareness and the rural markets, she said. Kochhar said that the market is expected to grow to $500 billion in the next 10 years and its growth would require a very significant participation by PE funds. “The fact is that private equity placements in agribusinesses is key to the growth of small and medium agri enterprises, their productivity, employment and overall growth of the economy,” she said, setting the tone for the event.

While the speakers pointed at a number of challenges for investing in this sector, everyone was of the opinion that growth could only increase in this sector. Investors and experts said that consolidation, getting the unorganised to organised, and aggregation plays in rural businesses presented huge opportunity. One of the conclusions was the need for banks and investors to get more aggressive, risk taking in order to make this sector to grow.

The first panel - FOOD & AGRI BUSINESS: OPPORTUNITIES & CHALLENGES FOR PRIVATE EQUITY - was moderated by Vijay Chandok, senior general manager at ICICI Bank, who said that in last 3-4 years food and agri business has been able to attract $500-700 million in PE funding, but would need $25-30 billion of investment in the next three years. Bert van der Vaart, Co-Founder of SEAF, said that agri-business in India provided “an oasis of optimism in a world of dark clouds.” Vaart said that though agri is considered a defensive investment, in markets like India and China with 40-90% growth, it can provide potentially very high returns.

Anil Sarin, Managing Director of Bessemer Venture Partners, said that the agri sector is more complex than any other as imponderables are more. He highlighted that the sector is prone to issues like ban on commodities trading, export ban and price control, among others. Prasad Gopalan, Head, Agribusiness, Asia, International Finance Corporation (IFC) said that agri is a globally inter-linked business, where impact of changes in one part is felt by another more faster and stronger. Gopalan also said that agri is a capital intensive business and IFC would like to work with Indian banks, if the regulator allowed it.

Rajesh Srivastava, Chairman & Managing Director, Rabo Equity Advisors said that it’s a challenge to invest in mid-market firms in India as they are mostly family-owned with not much corporate governance, without well-known auditors and company board full of family members. He said that promoters of these firms need to have an attitude towards change to make PE deals work.

Vinod Kumar Chaturvedi, MD & CEO of food processing firm Usher Agro said that processing creates a world class market. He pointed out that while India is among top three in production of most variety of agri commodities, it’s not even in top ten in processing any of them.

While the first panel talked about challenges, the second highlighted how Indian companies are overcoming them. In India, acquiring large tracts of land for production of agri goods is a socio-politically sensitive issue. To overcome this, companies like Karuturi Global and KS Oils have acquired lands outside India to expand capacities and stay competitive. Investors are looking to put money in areas like livestock, animal health and nutrition, logistics, while once-favourite bio-diesel is now on the bottom of the list. The panel also talked about how research in India’s agri-universities were not commercialised or not viable.

The third panel - OPPORTUNITIES IN FRONT-END & RURAL BUSINESS - talked about front-end opportunities present in food and agri-business, especially in urban India. The panel was moderated by Deepak Shahdadpuri, MD of Baer Capital Partners and comprised of Sachindra Rudra, Senior Investment Director at Navis Capital Partners, Naresh Malhotra, Operating Partner at Sequoia Capital, Gaurav Mathur, MD at India Equity Partners and Prashant Desai, Head of Future Ventures, and each panelist talked about their experience in investing in this area.

Malhotra, who was the CEO of Café Coffee Day, said that the company has grown 3-4 times in the last few years. He said that main challenge for business remains staffing and rentals. Lack of productivity and training among the staff remains a problem.

Rudra, whose firm has invested in Nirula’s, said that their investment thesis has played out with the chain expanding into newer cities. Mathur, who invested in Dominos India, said that when the company aggressively expanded into smaller towns, the sales fell when initially novelty faded and they had to pull back. Desai of Future group said that they were expanding into rural retail with acquisition of Godrej Aadhaar and selling jeans, refrigerators, etc. for which villagers have to travel to urban areas to buy.

When asked about the negatives of investing in India, panelists said companies should get their business models right, logistics and infrastructure, lack of middle management, etc.

Vasudevan, who heads one of the fastest growing MFI’s in the country, said that his firm focused on the need for urban poor unlike all others looking at only rural poor. He said though investors have high risk return expectation from this sector, they should be patient and reasonable. Rai said that activity of making money is itself a corporate social responsibility and a way to reduce poverty. He also said that variability in strategy adopted by various players is good for the sector.

Shah, whose fund is looking to invest in this space, said that the sector looks good for late stage investing as 10-15 large players who could become larger. But Shah also cautioned against a bubble in this sector, evident by the large valuation being asked for by players in the field. He said seven times book value for microfinance institutions is high as some of the nationalised banks are available for 0.6 times the book value. This view was contested by some of the other participants as they said it's a high growth sector. For instance SKS Microfinance now has 4 million customers compared to a few thousands in 2001.

Gurmani said now the effort is to now deliver multiple products through the large network that has been built by MFIs. He talked about SKS running pilots to sell products like insurance policies, mobile phones, solar lights, water purifiers, among others. Vasudevan also pointed out a large demand for gold among his customers.