Divergence in the drug businesses: pharmaceuticals and biotechnology
Advertisement

Divergence in the drug businesses: pharmaceuticals and biotechnology

In the last two weeks, I have started writing about , the epic fall of Valeant and the unraveling of the Theranos story, but I have held back because all three stories have to be set against the backdrop of the changing health care business. While there are numerous stories being told about how this is changing, I decided that it made sense to start by looking at the evolution of the health care business over the last 25 years  and how changes in its core characteristics may explain all three stories.

To understand the drug business, I went back to 1991, towards the beginning of a surge in spending in the US on health care. The pharmaceutical companies at the time were cash machines, built on a platform of substantial up front investments in research and development. The drugs generated by R&D that made it through FDA approval and into commercial production were used to cover the aggregated cost of R&D and to generate significant excess profits. The key to this process was the pricing power enjoyed by the drug companies, the result of a well-defended patent system, significant growth in health care spending, splintered health insurance companies and lack of accountability for costs at every level (from patients to hospitals to the government). In this model, not surprisingly, investors rewarded pharmaceutical companies based on the amounts they spent on R&D (secure in their belief that the costs could be passed on to customers) and the fullness and balance of their product pipelines.

So, how has the story changed over the last decade? The rise in health care costs seems to have slowed down and the pricing power of drug companies has waned for many reasons, with Obamacare being only one of many drivers. First, we have seen more consolidation within the health insurance business, potentially increasing their bargaining power with the pharmaceutical companies on drug prices. Second, the government has used the buying clout of Medicaid to bargain for better prices on drugs, and while Medicare still works through insurance companies, it can put pressure on them to negotiate for lower costs. Third, the pharmacies that represent the distribution networks for many drugs have also been corporatized and consolidated, and are gaining a voice in the pricing process. The net effect of all of these changes is that R&D has much more uncertain payoffs and has to evaluated like any other large capital investment, that it is good only when it creates value for a business. Consequently, investors have had to become more measured in their judgment of R&D spending at drug companies, rewarding companies for spending more on R&D only if it is productive and punishing them when it is not.

The diminished pricing power story is not a new one and others have made the points that I have but it is still just a story. The real question is whether the numbers back the story and to answer that question, I looked at key operating metrics for publicly traded drug companies from 1991 to 2014, with the intent of eking out trends in the numbers.

The Revenue Growth Story: The Rise of Biotech

The growth in health care costs continued into the last decade, albeit at levels much more moderate than in the 1990s, but the big story was the rise of biotechnology companies in the space. At inception, the distinction between pharmaceutical and biotech companies wass the method by which they produced drugs, with pharmaceutical firms working with chemicals and biotechnology companies using live organisms (bacteria, cells or yeast) to generate their drugs. Given that both R&D processes are designed to generate drugs that go through similar FDA approval processes and get sold through the same distribution channels, this difference is one that only scientists can relate to, and one that is becoming meaningless as R&D departments at both groups poach on the other's territory. The rest of the differences that people point to between the two, i.e, that biotech companies spend more time on research, tend to lose money and are riskier than pharmaceutical firms have less to do with business differences than life cycle differences.

In the picture below, I look at the aggregate revenues reported by pharmaceutical and biotechnology companies from 1991 to 2014. 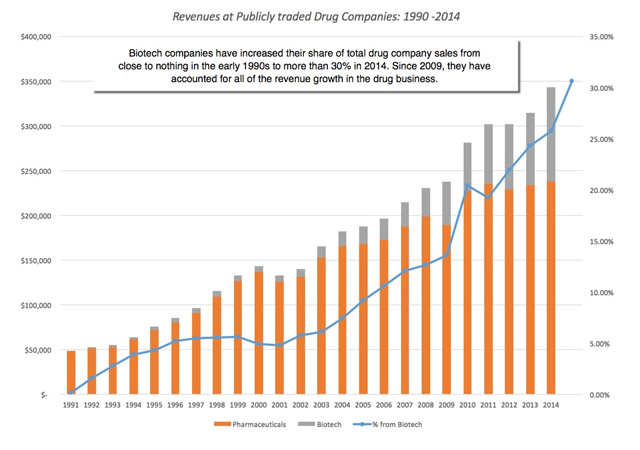 Note that by the last decade, and especially since 2010, almost all of the growth in the drug business has come from the biotech companies, with pharmaceutical companies reporting flat revenues between 2010 and 2014. In 2014, biotech companies accounted for 30.63% of total revenues at drug companies, up from 19.23% in 2010.

The generalization that biotech companies tend to be younger and earlier in the life cycle is being put to the test as some biotech companies age. In 2014, for instance, four of the top ten drug companies in the US, in revenues, were biotechnology companies. 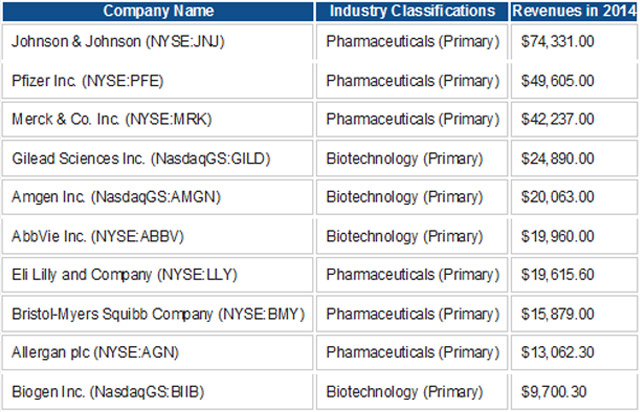 In fact, many of these companies have blurred the line between pharmaceutical and biotechnology companies further, and some like Pfizer describe themselves as biopharmaceutical companies.

The Money Machine: Profitable but for how long?

In keeping with the hgh pricing power story, pharmaceutical companies have always been able to enjoy sky-high operating margins, a fact rendered even more impressive by the fact that the accounting at these companies treats R&D, the biggest capital expenditure that these firms have, as an operating expense (thus depressing reported profits and margins). In the graph below, I look at the evolution of operating margins at pharmaceutical and biotech companies from 1991 to 2014, using two measures, one looking at operating profit (EBIT) as a percent of sales and one with R&D added back to operating income (EBITR&D) estimates as a proportion of sales. 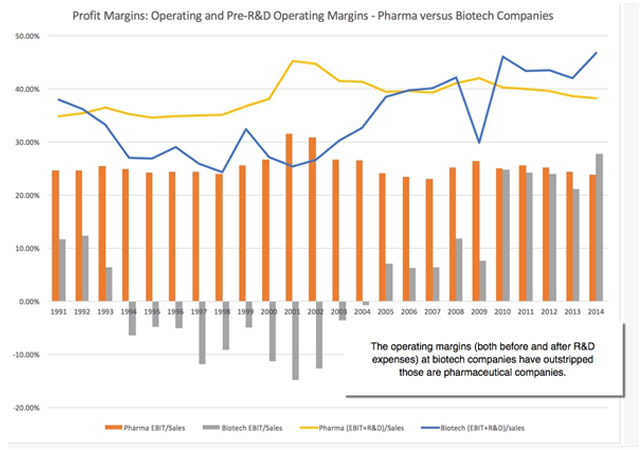 On the surface, at least, no one will shed tears for pharmaceutical companies since companies in most other sectors would gladly trade for their margins. In fact, while operating margins for pharmaceutical companies have dropped from their highs in 2001 and 2002, they are not very different from what they were in the 1990s. The story again, though, is in the biotech space, where companies have moved from losing money in the early 1990s to collectively generating higher margins than pharmaceutical firms, with the difference being even more pronounced on a pre-R&D basis.

The Payoff to R&D: No longer a slam dunk!

The argument for spending money on R&D has always been a simple one. By investing in R&D, you are investing for future growth and it is an equation that has held well for much of the last 25 years. In the table below, I report revenue growth and R&D expenses as a percent of sales each year for pharmaceutical and biotech companies each year from 1991 to 2014. 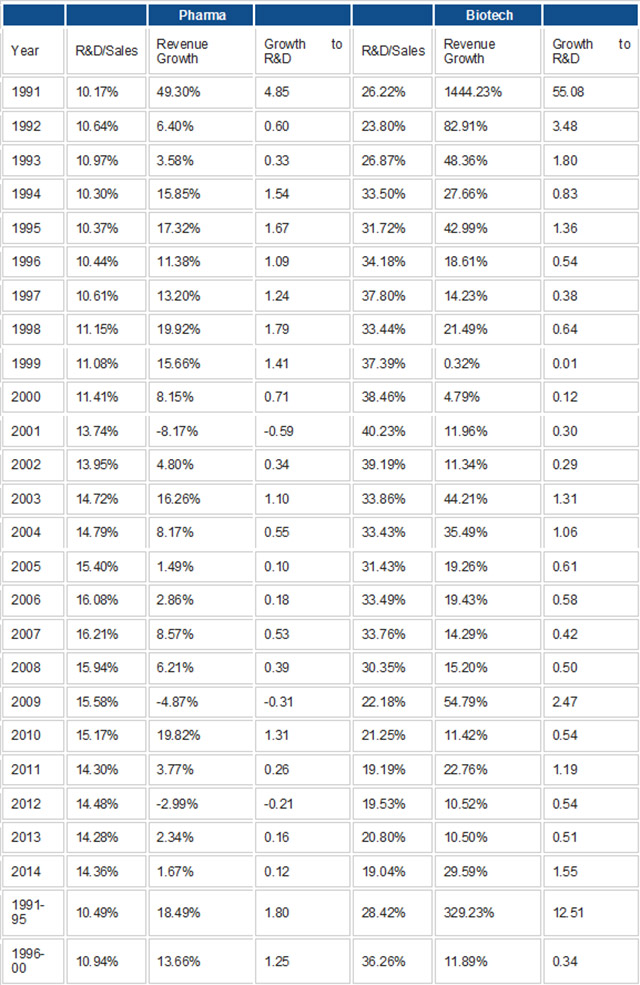 I know that there is a substantial lag between R&D spending and revenue growth, but as a simplistic measure of the contemporaneous payoff to R&D, I computed a growth to R&D ratio:

Notwithstanding its limitations, this ratio illustrates the biggest divergence between the two subsectors, dropping close to zero for pharmaceutical firms from 2010-14 time period, while remaining relatively healthy (though lower then in earlier periods) for biotech companies.

As the operating metrics for pharmaceutical and biotech companies have changed, the market has also adjusted to reflect these changes, though the argument always can be made that it has adjusted too slowly and not enough or too fast and too much. 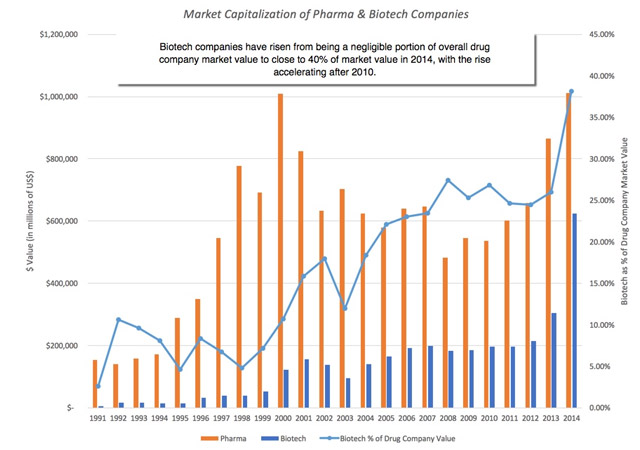 Bringing the changes in operating metrics and market value over time into one measure is difficult partly because biotechnology companies have lost money for the bulk of the last 25 years. The only multiple that can be computed for both groups is the ratio of enterprise value ( to earnings before interest, taxes and R&D (EBITR&D) and the graph below captures the shifts over time: 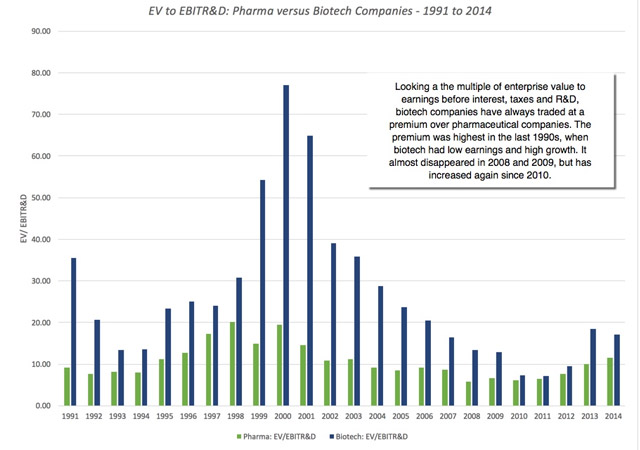 Biotech companies traded at huge multiples in the late 1990s, partly because they earned so little and were being priced for future growth. As they have became larger contributors to earnings in the drug business, the multiple at which they trade has come down and both groups traded at roughly similar multiples of EBITR&D in 2008 and 2009. Since 2010, though, the multiple of EBITR&D at which biotech companies trade has risen relative to pharmaceutical companies.

The Aging of the Drug Business

As many of you have been reading this blog know, one of my favorite devices for explaining shifts in businesses and companies is the corporate life cycle. As companies age, not only should the focus change but so will the way investors judge them: 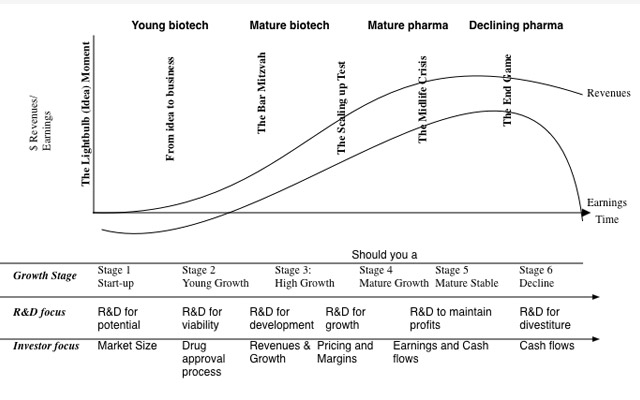 Just as the aging of technology companies has created more diversity in that space, an argument that  I made in this post, the health care business is showing signs of aging. The older, more established companies in the business, for the most part, are in their mature phases, and not surprisingly, their focus has shifted to consolidation, capital structure changes and tax management. The younger companies in the space will increasingly carry the burden of investing for growth, but will have to be far more disciplined in their R&D spending than their older counterparts were two decades ago. If health care cost growth continues to be contained and drug company pricing power remains muted, you should expect to see less aggregate spending on research and development at drug companies. While that will undoubtedly provoke hand wringing on the part of experts, pundits and politicians, it is the logical consequence of a changing health care landscape.