The recently elected National Democratic Alliance (NDA) government will present its first budget on 10 July. In February 2014, the previous administration had passed a vote-onaccount, which allowed the authorities to continue spending up to the end of July. The upcoming budget will, thus, essentially define the new government’s financial plans for the remaining eight months of FY 14-15 (August-March). The proposed budget will need to be approved by both the lower house (Lok Sabha) and upper house (Rajya Sabha), though these should be formalities given the size of the NDA’s election victory.

Expectations for the new government are high. We believe that the NDA, buoyed by its resounding victory, will lay out an agenda of economic and tax reforms, along with plans to start a fiscal consolidation process, in line with Prime Minister Modi’s recent message about ‘tough decisions’. We think the government is also likely to press for administrative freedom and use executive decisions, rather than legislative proposals to kick-start the economy. Such an approach would add speed to decision making and policy initiatives.

In the budget, we expect the government to signal three immediate policy thrusts, as well as a roadmap for medium-term fiscal consolidation. First, the government is likely to offer more support for manufacturing activity. Job creation is a key policy objective here, and the government has already extended the tax breaks given to the auto sector in the February voteof- account. More policy support is likely to be introduced, potentially for labour intensive manufacturing sectors. We think these may involve reducing duties for sectors such as gems and jewellery, and real estate. Second, the government will likely outline a more systematic and time-bound process to approve infrastructure projects to address supply-side concerns. Such action should increase incentives for investment in infrastructure, while broadening access to funding for various sectors. Finally, we believe the government will layout a timeline on tax reforms to broaden the government’s revenue base, and a timetable on implementing the much-discussed goods and service tax (GST) in particular. 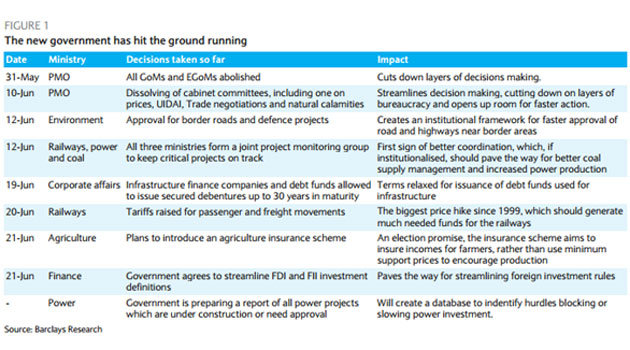 Apart from addressing near-term issues, we think the government may also choose to outline a timetable for liberalising more sectors for foreign investment, and make proposals to implement both labour law reforms and subsidy rationalisation, particularly for cooking gas/kerosene.

It is relatively easy for the government to select sectors for more FDI. In areas such as defence manufacturing and E-commerce (online retail), parliament approval is not needed. FDI in insurance, however, does need approval. We think the government will affirm its commitment to allow more FDI, but is likely to implement such changes over the coming few months, as these would need to be sequenced carefully. In recent weeks, there has been more discussion around easing labour laws, which are seen as a significant burden for businesses, to encourage large-scale manufacturing. Some state governments, such as Rajasthan (ruled by the BJP), have already moved to liberalise labour laws, and this policy is likely to be pursued on a national basis as well. If local labour laws are reformed, we think would be a big boost to India’s ambition to become a manufacturing powerhouse. Also, FDI in railways is likely to be mentioned, as the government has already floated an internal proposal for this area, and we would expect some progress in coming months.

We also expect the government to outline a roadmap for medium-term fiscal consolidation, particularly for subsidy rationalisation. In FY13-14, India spent about INR2.5trn (2.2% of GDP) on food, fertiliser and fuel subsidies. Rationalising these costs will both be a key part of the fiscal consolidation process, and allow more spending on public infrastructure projects. As subsidies on diesel have been almost phased out, the focus will shift to reducing subsidies for LPG/kerosene, which accounted for 55% of total under-recoveries of the oil companies in FY13-14. While the government has ruled out immediate price hikes, we think it may choose to adopt a similar gradual mechanism to raise LPG/kerosene prices. However, it is far from certain what action it will take in this area in the short term. We think the government may choose to rationalise some fertiliser subsidies, but is unlikely to make changes to food subsidies, especially given the backdrop of a poor monsoon season, and recent price shocks.

The previous government, in its February 2014 interim budget, had projected a fiscal deficit target of 4.1% of GDP for FY 14-15. This target will not be easy to achieve, in our view. Since FY 07-08, India’s fiscal deficit has widened considerably and even though the headline fiscal deficit targets were met in the past two fiscal years, mostly reflecting cuts in spending, the fundamental improvement in fiscal health has been limited. The spending cuts, often in capital expenditure, of recent years are also likely to have had negative longer-term side effects. We think the new government could adopt a different approach. Clear guidance for a more realistic path for fiscal consolidation could be more effective rather than ‘achieving’ a lower headline fiscal deficit mainly by cutting expenditure, especially as the latter approach may have had an impact on the economy given the weakness in growth in the recent past. Accordingly, if the government raises the fiscal deficit target in the budget (say, to 4.5%) for FY 14-15 and offers a credible medium-term roadmap (say, three years) for fiscal consolidation, we think this would be well received by the markets. The government’s cash balance (~INR1trn as at end-March) should also be sufficient to prevent any material slippage in market borrowing targets despite such a widening in the fiscal deficit.

The trends as per the initial months (April-May) of the current fiscal year suggest that the government has already spent ~45% of the total budgeted fiscal deficit for FY14- 15, the highest spending deficit run-rate in the last seven years. This is being driven by higher spending, which has risen 29% y/y YTD, on the back of higher non-plan spending. The new government has indicated its preference to continue with growth-supportive spending, albeit in a fiscally responsible fashion. Moreover, revenue buoyancy remains modest, reflecting subdued economic activity levels. Accordingly, we see a likelihood that the FY14- 15 fiscal deficit could be higher than the previous government’s projection of 4.1% of GDP (Barclays: 4.5%).