Budget 2013: Thumbs up or down for Private Equity

Private equity and venture capital investments have been fuelling Indian economy and the Finance Minister has rightly acknowledged FII, FDI and ECB as three main source of current account deficit financing. The investor community had a wide wish-list from the budget this year. Expectations inter alia revolved around the clarity of statutes, providing tax certainty to investors, reforms to encourage greater foreign participation in Indian capital market. Optically, the FM seems to have addressed some of these issues. Here’s some detailed analysis.

Pass through status only to certain Alternative Investment Funds (AIF)

Tax pass through is available only to Category I AIFs with sub-category as Venture Capital Fund (VCF) and VCFs which satisfies the prescribed conditions under the Income Tax Act, 1961 (the Act). As per SEBI AIF Regulations, VCF is restrictive definition which, inter alia, includes AIFs which invests in start-ups, emerging or early start ventures.

The other sub-categories of AIFs such as Infra funds, social venture fund or SME fund and also AIF Category II and Category III will continue to be governed by complex provisions of trust taxations in order to avail the pass through benefit.

Formal enactment is proposed to provide that TRC in the prescribed format shall be necessary but not a sufficient condition for claiming Treaty benefits. It is proposed that the aforesaid enactment would be effective from Financial Year (FY) 2012-13.

This proposal may have impact on transactions undertaken during FY 2012-13. Now, the offshore funds will have to prove substance in offshore jurisdiction to avail treaty benefits.

Formal enactment with respect to deferral of GAAR

In order to give effect to certain recommendations of the Expert Committee it has been proposed to amend certain provisions of the Act, which, inter alia, include the deferral of the GAAR provisions with effect from FY 2015-16, dilution of certain stringent clauses etc.

Tax on buy-back of unlisted shares

An additional income tax at the rate of 20 per cent proposed on gains from buyback of shares by unlisted companies. It is proposed to exempt such income in the hands of shareholders.

Even genuine buy-back done as a part of corporate restructuring such as reduction in capital of an Indian Company would get impacted. Also this could create issues of tax credit in offshore jurisdiction where such buy-backs are taxable in home jurisdiction of shareholders.

• Enhanced encouragement to power companies – The sunset date for availing tax holiday to power sector has been extended for one more year up to March 31, 2014. 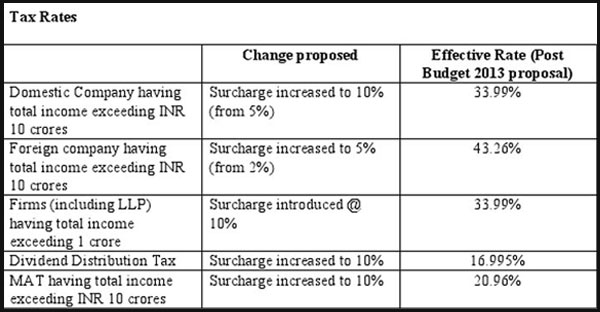 The FM has opened up new investment avenue for FIIs by allowing them to participate in exchange traded currency derivatives. Also, the FM has consulted SEBI to simplify entry procedures for foreign portfolio investors. Further, in his speech, the FM has proposed to formalise a rule with respect to classification of foreign investments as FII vis-à-vis FDI based on percentage of holding.

While the FM tried to clarify certain anomalies under the Act, few questions on interpretational issues with respect to indirect transfer tax provisions, clarity on concessional rate of tax of 10 per cent on sale of private company shares by non-residents etc. have not been addressed.

To summarise, budget 2013-14 has been a mixed bag for the private equity players. While the intent of the FM to set a supportive trend to a specific sector is evident, there have been obvious proposals to ensure check on avoidance and evasion of tax which are in line with the changes proposed in Direct Taxes Code.