Alibaba’s coming out party: Valued right, but is it priced right?

As Alibaba's IPO approaches and the road show kicks into high gear, questions about its accounting, value and corporate governance that came up at the time of the filing of its initial prospectus on May 6, 2014, are resurfacing. Alibaba's banking team announced on Friday that their initial pricing for the stock would between $60 and $66 a share, giving the company an estimated an equity value of about $155 billion at the pricing midpoint. That would make it the most valuable IPO in history, much higher than the $80 billion at which Facebook's equity was priced at the time of its IPO in 2011 or the $25 billion at which Google priced itself in 2004.

I valued Alibaba in May 2014, right after their initial prospectus was filed in this post which I titled "Alibaba: A China Story with a profitable ending?". In that post, I argued that Alibaba's dominance of the Chinese online retail market provided a foundation for immense value, driven by the size of and the growth in that market and sky-high operating margins. While I will not repeat the specifics of the valuation here, the combination of high revenue growth, sustained margins and relatively low reinvestment, I argued, yielded a value of $145.6 billion for the company and a value per share of approximately $61/share.

Much has happened in the five months since: Alibaba has navigated its way through some accounting quicksand, rumors surfaced of an investment in Snapchat that valued the company at $10 billion though the deal fell apart, and Alibaba updated its prospectus to reflect an additional quarter of information. Since a few months can shift both the numbers and the narrative for a young company, I revalued the company on September 2, 2014 (it was the first valuation of the week in my Fall valuation class) using Alibaba's filing from August 27, 2014. While there a few tweaks to the valuation, my assessment of the company has changed little. The value of equity that I get, allowing for an initial offering proceeds of $20 billion, is $161 billion, with about half of the increase in value   coming from a larger initial offering, and the value per share that I get for the company is about $66. The picture below captures my assumptions and you can contrast it with my earlier valuation from May, if you are so inclined: 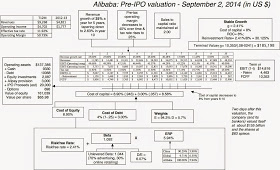 You can download this valuation in spreadsheet form, by clicking here.

In keeping with my posts on narrative and numbers, the key question is whether there is anything that has happened in the last few months that has changed my narrative of Alibaba as a dominant, profitable Chinese online merchandiser and the answer is 'not yet'. The reason that it is not an emphatic no is that some of the actions taken by Alibaba in the last few months, including a rumored investment in Snapchat, suggest that it has ambitions to become a global retail giant, competing with Amazon, Google and even Facebook. In the quarters to come, if these actions become more concrete and costly, I will revisit this valuation to see the effects, positive and negative, of this narrative shift.

I have a few emails in the last few days asking whether I feel vindicated by the fact that Alibaba's bankers seem to have arrived at a number very similar to mine and my reaction is mixed. First, given what I think about the valuations that emerge from investment banks in general, I am queasy that I am in agreement with their assessments of Alibaba's value. In fact, it is entirely possible and perhaps likely that both the bankers and I are hopelessly off track on our assumptions and that the true value is a number very different from our assessment. Second, and repeating a point I have made on prior posts about IPOs, bankers don't value companies in IPOs; they price them and the fact that they are thinking of pricing the company close to my estimate of value is, in my view, more coincidence than a reflection of consensus.

When asked to attach a number to an asset, I believe that you have to start with a fundamental question: Is your mission to attach a value to the asset or is to price the asset?  If your job is to facilitate a transaction or get a deal done, as is the case with bankers in an IPO, you have a pricing mission and we would all save ourselves significant disappointment and disillusionment, if we remembered that. In effect, Alibaba's bankers have to price the stock for the IPO, not value it. To get to the right price for a company in an IPO, there are five key steps involved, though one of them is purely for external consumption.

After all of this effort on pricing, you would think that the bankers/issuing company would get it right, but as Facebook and Twitter illustrated in divergent ways, it is easy to get it wrong, with the offering price set too high for Facebook and too low for Twitter. As to how Alibaba will fare on opening day, your guess is as good as mine, but if the stock does jump about 15% on the opening day, the company and its bankers will celebrate a Goldilocks pricing moment.

Should you invest in Alibaba? At its estimated offering price of $150-160 billion, I think that it is a fairly-valued investment, if you can overcome two fears. The first is that, as a shareholder, you are not becoming part owner of Alibaba, the Chinese online merchandiser,  but instead get a share of a shell entity (the Cayman Islands based variable interest entity) that controls the operating company through a legal agreement (that exists because the Chinese government treats it as such, for the moment). The second is that you are buying a corporate governance nightmare, where this will remain Jack Ma's company for the foreseeable future and you will have no say in what the company does, how it is overseen or its management decisions. I will return to the issue of corporate governance, why it matters and how best to incorporate it into value in another post. I, for one, will stick with my indirect investment in Alibaba, through Yahoo!, and hope that I get the spillover benefits.

Should you trade Alibaba? That will depend on whether you are good at playing the pricing game and I drew the distinction in this earlier post. Since I am not particularly good at this game, my advice on this count is worthless, but if you do play the pricing game, recognize that your capacity to make money will come from assessing investor mood and stock price momentum.