After gold, India set for its first diamond mine auction

The diamond block called Hatupur in Panna district of Madhya Pradesh will be put up for auction under the composite licencing route, said two government officials aware of the development requesting anonymity.

A composite licence holder conducts the geophysical exploration of the area to find out the exact reserve of the mineral and starts mining later on.

India’s Parliament in March 2015 amended the Mines and Mineral (Development and Regulations) Act, 1957 (MMDR) and laid down the legal framework for granting concessions of all mineral resources via auction. The MMDR Act allows auction of mines bearing minerals such as iron ore, bauxite, among others, excluding coal and lignite. 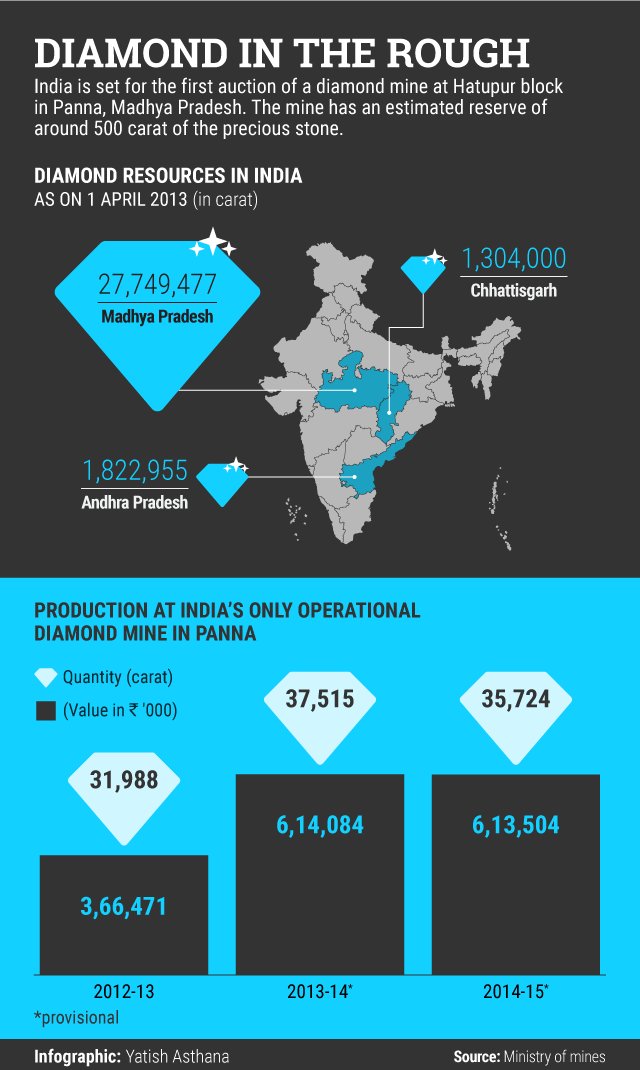 India has diamond reserves in Andhra Pradesh, Chhattisgarh and Madhya Pradesh (MP). Currently, the Panna diamond mine in MP is the only diamond producing mine in the country that is under operation. It is run by state-owned National Mineral Development Corporation.

The Geological Survey of India, the technical wing under India’s ministry of mines, is actively engaged in exploration of kimberlite clan rocks which is the source of diamond. Also, global miner Rio Tinto has an advanced exploration project at Bunder in MP, according to information available on its website.

According to one of the officials quoted above, the notice inviting tender (NIT) for the Hatupur block will be issued shortly by the Madhya Pradesh government.

The area of the Hatupur block is around 136 hectares with the value of the reserve estimated to be approximately Rs106 crore. The kimberlite reserve in the block is expected to be around 60 million tonnes with diamond reserves of 500 carats (a unit of mass for gemstones). The lifespan of the mine is around 25 years.

Queries emailed to the ministry of mines and the Madhya Pradesh government spokespersons on 4 April remained unanswered.

Africa accounts for around 65% of the world’s diamond reserves with Angola, Australia, Botswana, Canada, Congo, Russia and South Africa being the main diamond producing countries.

According to data available with the World Diamond Council, the total value of diamond jewellery sold each year is approximately $72 billion (Rs4.78 trillion), which includes the cost of diamonds, precious metals and other gems.

“It’s been long overdue. We have resources of precious metals including gold, silver and diamonds in our country. It’s really a good move by the government that efforts are being made towards putting these minerals under production,” said Kalpana Jain, partner at consultancy firm Deloitte Touche Tohmatsu India Llp.

The Bharatiya Janata Party-led government is credited with setting up a template for natural resource allocation in India through coal block auctions which is now being followed for other minerals.

A total of six mines have been auctioned in Jharkhand, Odisha and Chattisgarh under the amended MMDR, with the central government set to receive revenues of Rs18,146 crore over a period of 50 years—the term for which the mines are auctioned.

Anil Aggarwal-owned Vedanta Resources won the first gold mine auction for Baghmara in Chhattisgarh in February 2016. VCCircle on 18 March reported that the eastern state of Jharkhand is going to auction two mineral deposits each of gold and copper.